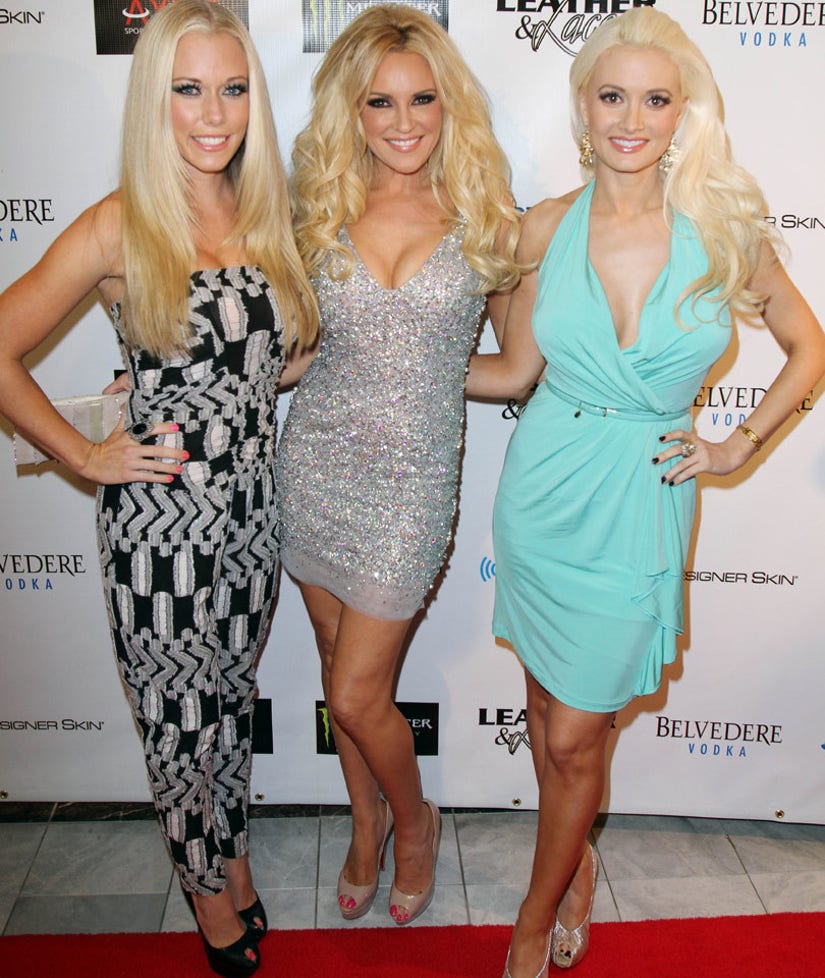 UPDATE: Kendra just put Holly on BLAST over her most recent comments.

"Hollys job was to get Hef hard again and clean him up with her mouth," she posted on Twitter Thursday morning. "That bitch is in fear now knowing so many of us saw her doing some nasty s---. She's embarrassed and in shame. She was the clean up girl."

"Now Holly is on cover of People mag sayin she lived in fear at the mansion," Kendra continues. "She wasn't in fear with that d--- in her a-- for a paycheck."

In response, Holly tells toofab: "I've written a book, 'The Vegas Diaries,' that's about letting go and moving on. About resolving the past so you can live a future. I've dealt with my demons and I've come out ahead. I can hold my head high and work hard to be the classy and kind person I aspire to be. I want no part of a one-sided argument or feud where one woman lives to demoralize and degrade another woman. For those with unresolved issues, therapy works. You should try it."

This season on "Kendra on Top," there's been talk of a potential "Girls Next Door" reunion happening ... but, according to Hugh Hefner's former #1 girl, don't hold your breath.

"I don't think there would be anything positive about us meeting up," Kendra Wilkinson's former costar Holly Madison says in a new interview with People. "It's not a real friendship and it's not part of my life anymore."

The feud between these two started last year, after Holly said some not-so-pleasant things about Kendra in "Down the Rabbit Hole," her Playboy Mansion tell-all. Madison wrote about Wilkinson having a "sense of entitlement" when she arrived, after asking for a big room, a new car and money to get her teeth fixed. "I don't miss her," she added in the book.

Hank Baskett's other half went on to slam the tome, calling it a "book of lies."

"I wish her the best, but I'm done with that portion of my life," Holly says now, promoting her latest book, "The Vegas Diaries." "I've moved on. I'm happier now."

"A friendship with her was something I tried to work out off camera years ago," Madison adds. "But I don't want to let myself and my friendship with someone be jerked around based on what's convenient for someone's reality show. She can bad mouth me or put words in my mouth, but I'm not going to fall for that."

"There was so much competition among the other women," she added of her time in the Mansion. "I learned not to confide in certain people. There was a lot of fear. If I could go back and do things differently, I wouldn't be scared of people. And I'd push the boundaries a lot more. The number of times I stuck up for myself at the Mansion I could probably count on one hand."

While things are clearly tense between them, Holly doesn't hold the same resentment towards Bridget Marquardt.

"Bridget and I have always been friends off camera. There's a big difference between what's real and what's genuine versus someone who is like, 'I want to be in a feud with you this week because it's good for ratings,'" Madison continues. "I'm done playing those games."

Though it sounds like the expecting star has no plans to speak with Kendra face-to-face anytime soon, Wilkinson knows exactly what she'd say to her former costar if they ran into each other.

"I would never be worried running into her, but I do have a couple wonders," Kendra told toofab back in April. "I guess I'd point out a couple things. I have my side, you know? I would say, look, some of the things she wrote about, she didn't actually see. She just kind of assumed. She wrote it so it would demonize me, yet I have my version of the story. It's just wrong to write about things out of my character, things that I wouldn't do, things that are not who I am. It just goes to show that, once again, we were never friends. At the end of the day, everybody has their side of the story."

"Everyone has their perception of things and it comes from an emotional standpoint, it's coming from anger at the end of the day," she added of "tell-all" books in general. "You can't believe tell-alls, you can't believe them. You can, in your mind, read a tell-all and say, 'OK, [some] things probably happened,' but this is being written out of anger or emotional reasons."