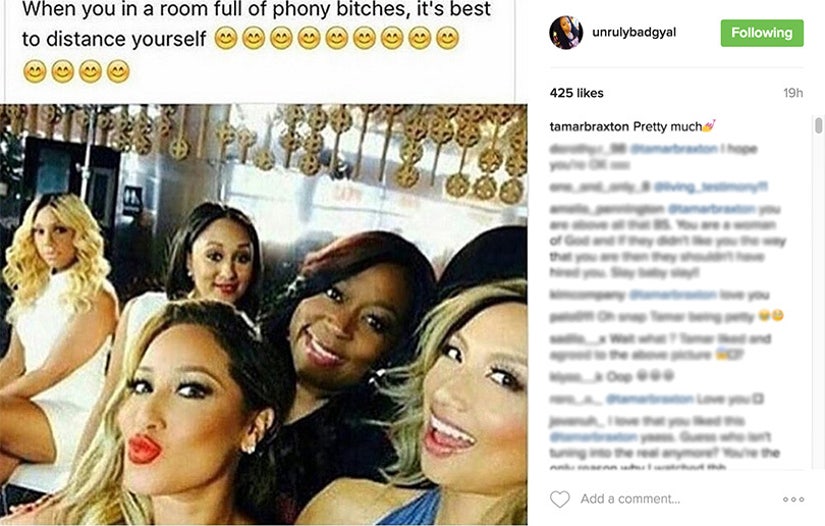 UPDATE: Tamar took to Instagram on Wednesday, seemingly responding to stories about her diss, writing, "Happy. Positive. And not an ill will toward ANYONE or ANYTHING❣ check me out on @iamsteveharveytv morning show tomorrow and hear why I have so much JOY!"

Click here for a breakdown on what she said about the women on Steve Harvey's show Thursday morning -- as she explains what REALLY happened when she was let go.

Tamar Braxton returned to Instagram with a vengeance on Tuesday, posting for the first time since her exit from "The Real" last month.

And man ... she really didn't hold back.

While she's only posted a Shake Shack photo on her own account, The Shade Room noticed she left a comment on a fan's page ... and what she had to say was very telling.

Another user shared a meme showing Tamar and her former cohosts Tamera Mowry-Housley, Jeannie Mai, Adrienne Bailon and Loni Love. In the shot, Tamar is off to the left looking concerned, while the others smile. The caption: When you in a room full of phony bitches, it's best to distance yourself.

Tamar didn't share the photo herself, but it looks like she did agree with its message. After liking the shot, she also commented on the girl's pic, writing, "Pretty much," along with a nail painting emoji to drive the shade home.

The diss comes after Braxton posted about being "stabbed in the back" right before the news broke. "I have been stabbed in the back by someone I stupidly trusted (not my man or my sisters)," she wrote a week ago. "I am not about to be tried and tested to snitch and it's not in good taste to tell you who...... but as #tamartians you are very smart and can figure things out on your own. But know that every one who smiles in your face is NOT your friend and is NOT cheering for you and will LIE and try and tear u down to TRY and dim your light."

While we wait for Braxton to spill the tea on what really went on between the women, her cohosts have all taken to social media to express their shock and sadness over her departure.

Though there were reports that she was difficult to handle on set, Loni wanted to make one thing clear: she had nothing to do with what happened!

"It was an individual phone call and I asked why. They told me it was none of my business, because it's between Tamar's management and them," Love says.

"When we wrapped Season 2, we had a photo shoot, Tamar was part of that. There was no indication that Tamar was going to be let go," she continues. "We as the hosts, we don't have that type of power. If I had that type of power, I'd have my own show. I don't fire people. We genuinely all like each other. Sometimes we might be irritated with each other, that's just part of the nature of the show. I'm very devastated, just like she is. I understand that she's upset."

Loni says she hasn't stopped trying to get in contact with Tamar, to no avail.

"I know I'll probably get in trouble for dong this and maybe I'll be the next one [to be fired]," she says in closing. "Tamar is a good girl, she works very very hard and she's very talented. We had nothing to do with the whole situation. Nothing. I'm very very devastated right now. I'll be off the grid for a while like everybody else as we try to figure all this stuff out."

Check out Tamera, Adrienne and Jeannie's messages below.