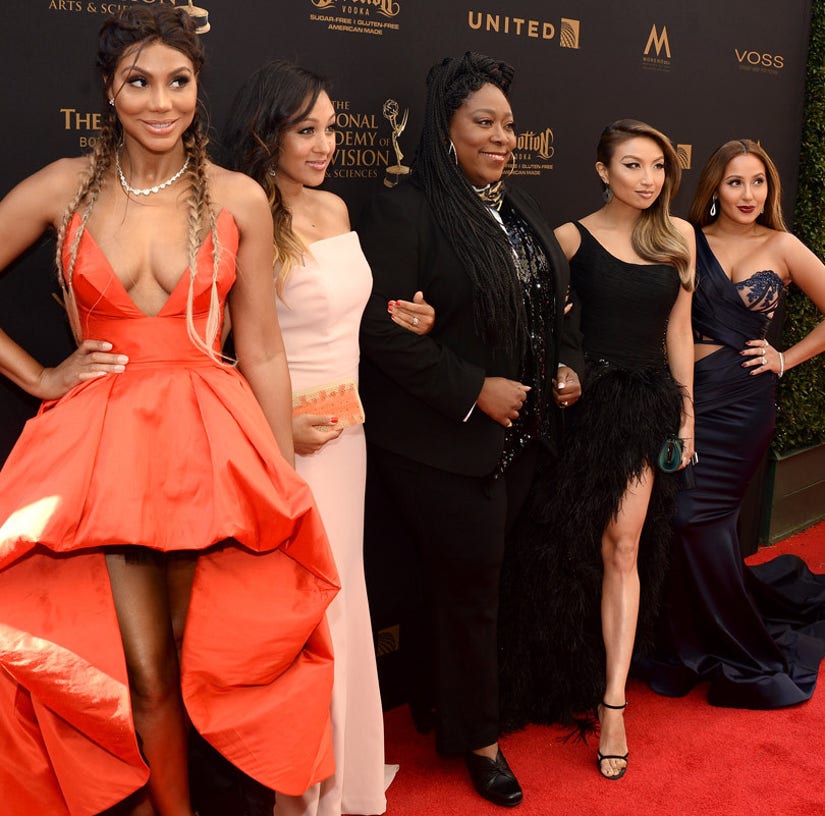 "Tamar Braxton's contract was not renewed for reasons that will remain privileged and private, and that are between her and the Studio. However, we would like to make it crystal clear that Ms. Braxton's departure from the show had nothing to do with her former co-hosts; any suggestion to the contrary unfairly tarnishes them. As always, we wish Tamar and Vince all the best."

Tamar Braxton just gave her first interview since being fired from "The Real" -- and, from the sound of it, she was totally blindsided by the news.

The reality TV star appeared on "The Steve Harvey Morning Show" on Thursday, where she spoke out about her surprising exit from the daytime talk show.

VIDEO: See Tamar BREAK DOWN Moments After Being Fired -- This Is Hard to Watch!

During the interview, Tamar explained that her husband, Vince, was the one who broke the news to her, after speaking to someone at the show.

"I was actually in my glam room and when I came downstairs, he had this look on his face that was distraught and confused," she said. "I thought something happened to someone in my family. He was like, 'I think you got fired.' I was like, 'What are you talking about? Fired for what?!' Honestly, my heart sunk into my shoes. I pretty much fell over."

While there have been reports that Braxton was difficult to work with on set and there was tension between her and at least one of her cohosts -- who include Tamera Mowry-Housley, Jeannie Mai, Adrienne Bailon and Loni Love -- Tamar says she didn't see her firing coming.

When asked if there was any "controversy" leading up it, she emphatically replied, "God no!"

"You know when you love your job, it's no issues. You're not complaining about much, you're not fighting with anybody, me and the girls got along, so I thought," she continued, giving some subtle shade. "We've been on hiatus for about three weeks, so for this to come out of the blue is astonishing, to be honest."

Since the show dropped the axe on her, Braxton says she hasn't been given any reason whatsoever about why she was let go.

"I wish I could sit here and tell you it was negotiation issues, it wasn't negotiation issues. I wish I could tell you that it was a headache on set, it wasn't. I really honestly don't know," she explained. "I feel like that is what is bothering me to this day. Sometimes when you don't see yourself or see what's wrong, you can't fix it. And so, if someone just tells you, I don't like you, so is it a personality issue? Is it just me? How do you fix yourself? I feel like you have to evolve, but how do I evolve from this."

VIDEO: See What Loni Love Had to Say About Tamar Being Fired

According to Tamar, her husband, her agent and her lawyer didn't know the firing was coming either. And while the initial shock definitely had to sting, she's just trying to stay positive now.

"I just want to say, getting fired or being let go from the situation does not mean you shouldn't value your work, because I do. I don't see myself as a celebrity, but do I see myself as a superstar, I do. I'm not going to allow anybody to dim my star," she said. "It took me a long time to see myself or take myself for who I am. I can't let this one situation make me lose my self esteem. This is not a setback, this is a set up. If you don't look at things like this as a blessing, it won't be a blessing."

"I don't feel like my future is not bright. I feel like it's brighter than ever," Braxton continued. "Sometimes we all have that feeling inside of us when it's time to leap and jump and when you don't, God will push you over the edge. He will do it for you. When it's unexpected, that's when you're hurting. I don't see this as anything negative, I see it as everything positive and I feel like God is moving in my life more than ever, I have to really depend and trust him."

The interview ended on a high note, as Steve revealed his production company just signed Tamar to produce a new show (or new shows) -- though no additional details were revealed.

All this positivity comes after Braxton seemingly dissed her former costars on Instagram on Tuesday.

Another user shared a meme showing Tamar and the other women. In the photo, Tamar is seen off to the left looking concerned, while the others smile. The caption: When you in a room full of phony bitches, it's best to distance yourself.

Tamar didn't share the photo herself, but it looks like she did agree with its message. After liking the shot, she also commented on the girl's pic, writing, "Pretty much," along with a nail painting emoji to drive the shade home.

Click here to see the photo -- what do you think really went down here?