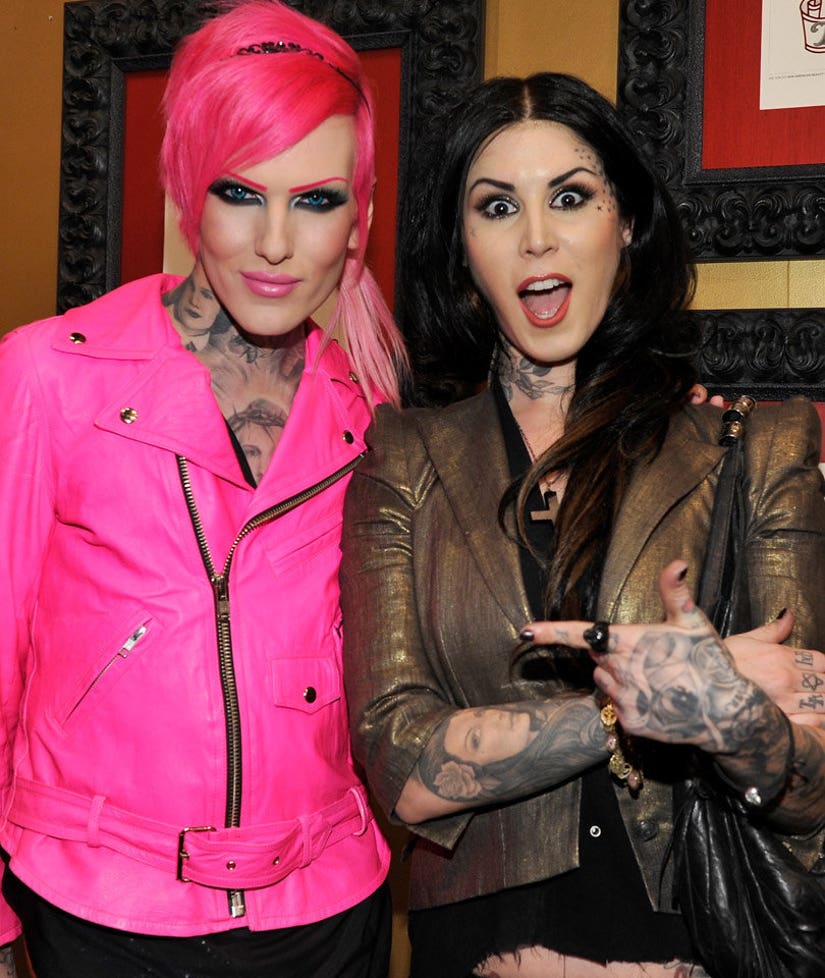 UPDATE: Kat just released a 14-minute video detailing her falling out with Star, calling him a "money-driven monster" -- click here for the full breakdown!

Tattoo artist Kat Von D and MySpace personality Jeffree Star are going at it, after years of friendship that benefited both parties professionally.

The inked up reality TV star took to her Instagram page last night, posting a picture of Star with a giant red strike out through it.

"After years of making excuses for, and rationalizing Jeffree's inappropriate behavior (including, promoting drug use, racism, and bullying) I can no longer hold my tongue after recent events," she wrote in the comments. "I know that over the years, many of you were introduced to Jeffree through me, and regardless if you chose to continue to follow him or not, I just would like to disassociate myself from him and his brand from this point on."

This won't be the last we hear about this feud, as Kat promised to post "a video explanation as to why I felt compelled to make such a statement." WATCH IT HERE.

"But for the time being, I simply want to apologize to anybody and everybody who has ever had to deal with any of his negativity," she continued. "And yes, with a heavy heart, I will be pulling the shade 'Jeffree' from my collection. Sending extra love to everyone out there."

The "shade" she's talking about from her liquid lipstick line, one of which she named after Star in 2014.

While we await more details from Kat, Jeffree took to his Twitter page to fight back against her accusations. Warning: Explicit language below.

Someone I haven't seen in over a year, wants to make a post about me. I'm yawning right now.....

Kat and I texted a few days ago after 6 MONTHS of silence. She never supported me or my brand and got distant when I launched mine.

She accused me of something that wasn't true, so I told her to fuck off and then blocked her number. Not that juicy of a story, sorry

This whole situation is sad and gross. I don't need to clap back or make a video about someone's post. It's getting trite.

Instead of feeding into negativity and internet fights, I'm going back to the real world and off to enjoy the rest of my day — Jeffree Star (@JeffreeStar) July 19, 2016

See Kat's video explanation here. What do you make of this feud? Sound off below!