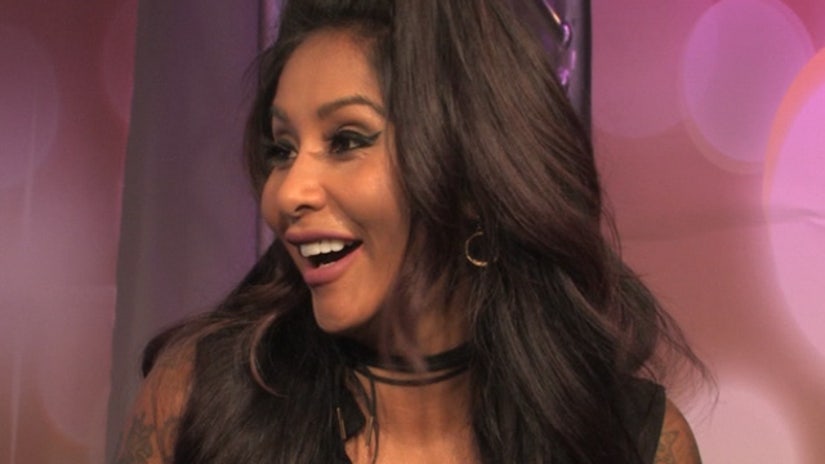 Nicole "Snooki" Polizzi has definitely come a long way from her drunken boardwalk days on "Jersey Shore," but she's still as refreshingly honest as ever.

Now married with two kids, the reality TV star and BFF Jenni "JWoww" Farley are giving their fans an incredibly candid look at what motherhood is really like on Season Two of their Awestruck series, "Moms with Attitude," which debuts today on go90.

"I've aways been [blunt] in general, so when it comes to mommy stuff, it's just natural to me," she tells toofab's Brian Particelli about her up front attitude on the show. "I don't like to hide anything and I feel like being a mom and being honest about that is very relatable."

"I don't consider myself a perfect mom, I try my best, but I have flaws," she adds, echoing Kate Hudson's recent quotes in Marie Claire magazine. "Sometimes I don't have time to cook, so I throw in an Ellio's [pizza] and give it to the kids, which is so bad for them. I try my best, but sometimes you gotta do what you gotta do."

While she's no stranger to haters, the series -- and motherhood in general -- has opened the petite Polizzi up to a new brand of backlash: mom shaming.

Nicole experienced shaming of another kind last year, after she got lip injections. She continued her cosmetic updates just last month, when she Snapchatted her first Botox treatments. So, did the trolls come out to blast her again?

"I don't even read it anymore, but I love posting about what I do because I'm an open book and I like people to know what I'm doing in my life. Even if they don't care, I'm still showing you," she explains. "I noticed in interviews like this, I express a lot and I noticed I had four lines and they were like permanent and I was like 'Ew, you're 28, stop it!'

"Moms get stressed, you can see it on our faces, makeup can't even cover it," she adds, "so you gotta do what you gotta do."

If you don't follow Snooki on social media, you may not be aware of her love of all things "The Walking Dead." With the fate of at least one regular cast member hanging in balance after that cliffhanger of a finale, we had to askwho she thought big bag Negan would kill when the show returns.

Let's just say she's done some serious investigating, so we won't write the potential spoilers here -- check out the video to see who she thinks is in trouble ... and who she picked in a TWD edition of Eff, Marry or Kill!

Plus, see why she said she had to throw back a glass of wine before filming with Arnold Schwarzenegger on "Celebrity Apprentice."