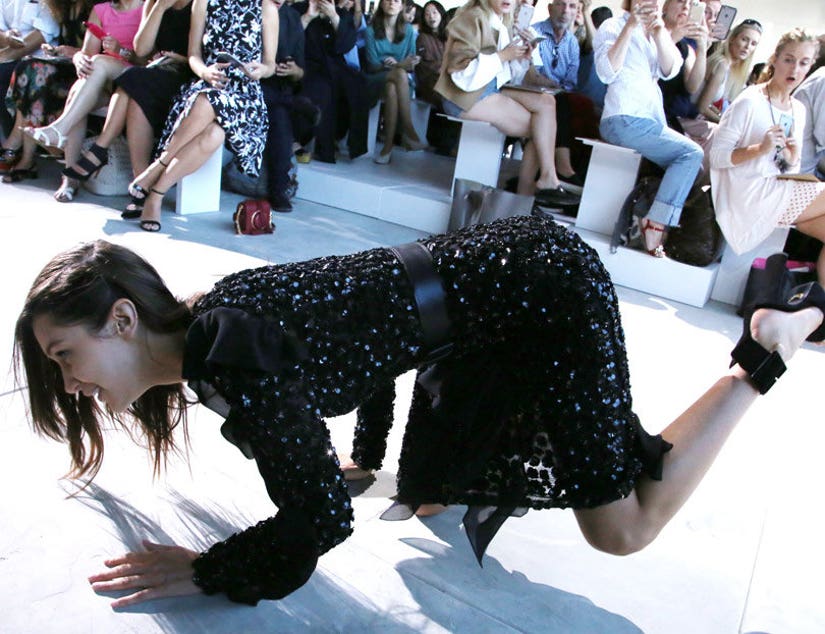 Bella Hadid had quite the runway moment earlier today during the Michael Kors show at New York Fashion Week, when she took a fall on the catwalk.

Before her wipeout, the 19-year-old model looked stunning in an sheer, embellished black dress which was cinched at the waist. She wore her hair down and rocked platform black heels.

Hadid shared video of her walk, moments before she ate it:

Those heels apparently got the best of her, as photos from the show chronicle her falling to the ground, hands first. It doesn't appear she was hurt at all and looks like she's actually smiling in the pics.

She reportedly got right back up and kept on walking.

Hadid recently opened up about her career in Glamour, where she defended herself against being called one of the "bitches of the moment" by supermodel Stephanie Seymour.

"It's crazy," she says. "I've worked with Stephanie before and loved her; she was sweet to me. I don't know if she meant it in that mean way. But even so, it's still hurtful."

So, how does she keep sane amidst under the never-ending scrutiny of an often harsh public eye?

"My close friends from high school keep me grounded -- they don't care about what I do," she admits. "I'm still the same person I was, and I try hard not to change."

Check out more looks from this year's NYFW in the gallery above!