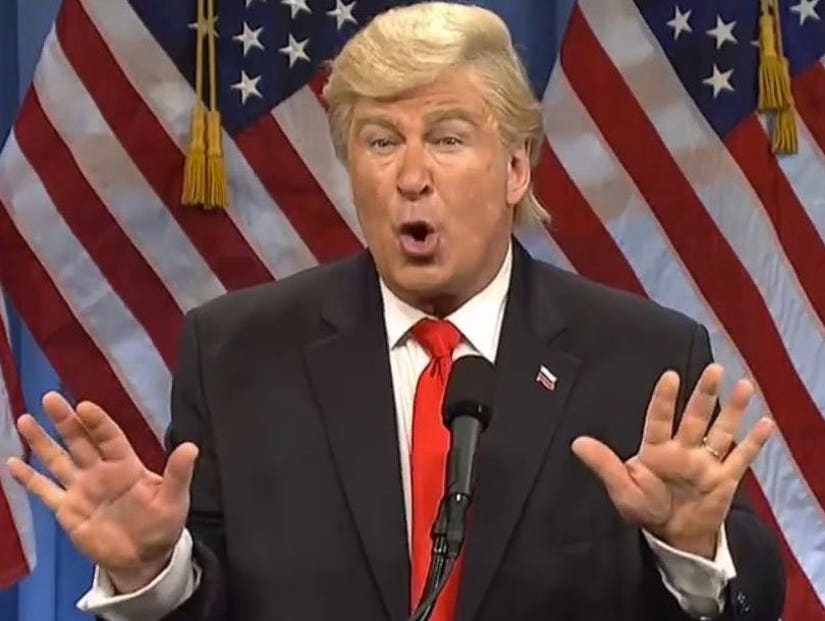 In SNL's cold open, the show spoofed this week's press conference, which grew heated between Trump and the press.

"Yes this is real, this is really happening," Baldwin's Trump said from a podium where he addressed a room of "reporters." He continued: "I would like to start by answering the question, what's on everyone's mind -- yes, this is me live. On January 20th, I, Donald Trump, will become the 41st president of the United States. Two months later Mike Pence will become the 42nd."

"I'm not talking about the peepee because it didn't happen and it wasn't as cool as it sounds. Next question," Baldwin said, referencing the "golden" allegations.

"Who is excited for my inauguration day?" asked Baldwin's Trump. The crowd erupted with cheers. "Yes, thank you to those people over there who I definitely did not pay to do that. And we have have got some of the biggest performers in the world lined up. Hold on to your t--s and bits, because we've got Three Doors Down."

Baldwin joked that the President-elect did have major celebrities who'd RSVPed to the inauguration events. "We've also got some huge A-List actors coming, like Angelina Jolie, Ryan Gosling and Jennifer Lawrence. They will all be at my inauguration courtesy of Madame Tussauds."

The opener also made fun of at Trump's sons Eric and Donald Jr., who were portrayed by cast members Alex Moffat and Mikey Day. "I've turned over all my businesses to my sons," says Baldwin. "Look at those two little 'American Psychos.' "