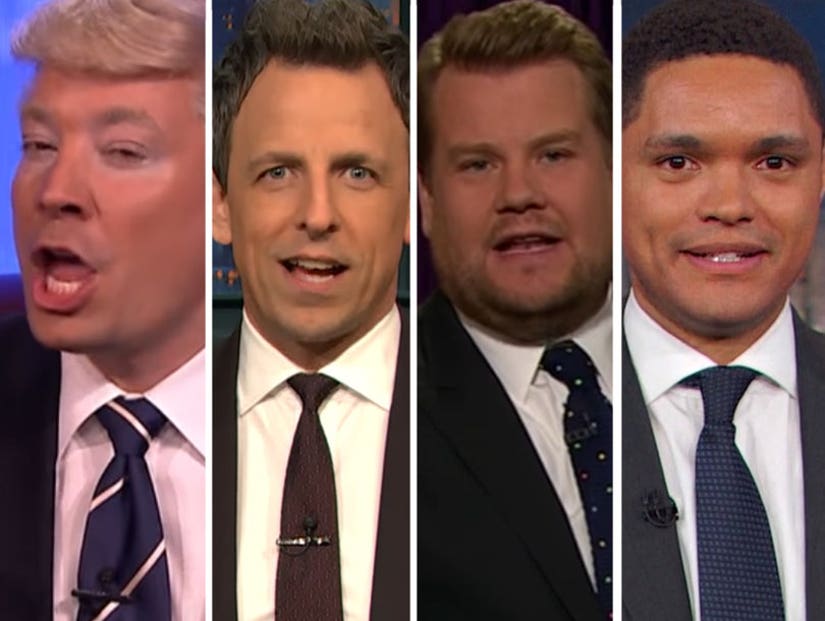 President Donald Trump's speech was the focal point of nearly every single late-night show host on Wednesday, as everyone from Trevor Noah to Stephen Colbert slammed the president for his congressional speech the night before.

"All Trump did was read a speech off a teleprompter," Noah said. "That's all he did. He read off the teleprompter without flying off the rails. You know how they say you're not supposed to shoot the messenger? Well maybe also don't suck the messenger's d--k, either, how about that?"

Take a look at what else "The Daily Show" host and others had to say about Trump in the videos below.

Attacking those who called the speech "presidential," Noah went all in on the media and the president.

"He's pulled this s--t over and over again, and every time the media falls for it," Noah said. "You don't have to be a genius to see that Donald Trump is playing you."

Fallon once again dressed up as Trump to report on his own speech on "Trump News Network."

He continued: "But I will also admit that right by before my speech, Steve Bannon did shoot me up with a horse tranquilizer."

"When I build my wall, the fake news media are the ones going over," Fallon said as someone off screen injected him with a preposterously large syringe, and then he changed the tone of the address immediately. A parody version of Kellyanne Conway also made an appearance.

James Corden opened Wednesday night's show expressing his incredulousness that the media - both Democratic and Republican - praised the president's speech.

"The Washington Post describes Trump's speech as, quote, 'surprisingly presidential,' which is insane," Corden said. "It's an actual article that the president behaved like an actual president."

Meyers on Wednesday night replayed clips of media outlets and political analysts complimenting the president on his "presidential" speech and also showed where Fox News anchor Chris Wallace said that Donald Trump "became president of the United States" on Tuesday night (and not actually in January, when the inauguration was held, apparently).

"I bet there are some Muslims and undocumented immigrants that would tell you he became president in f--king January," Meyers said. "Guys, seriously, do you have amnesia?"

Colbert pointed out that it seemed like a different Trump entirely who gave the congressional speech, but noted that the President simply changed his tone, not his words or intent.

"It was uncharacteristically optimistic last night and a lot of people are praising his 'shift in tone,'" Colbert said. "Yes, he shifted from unhinged narcissist to 'hinged' narcissist."

"You know who also said troubling things in a calm voice? Hannibal Lecter," Colbert added, and showed footage of "Silence of the Lambs" with Trump quotes dubbed over Anthony Hopkins' lines.