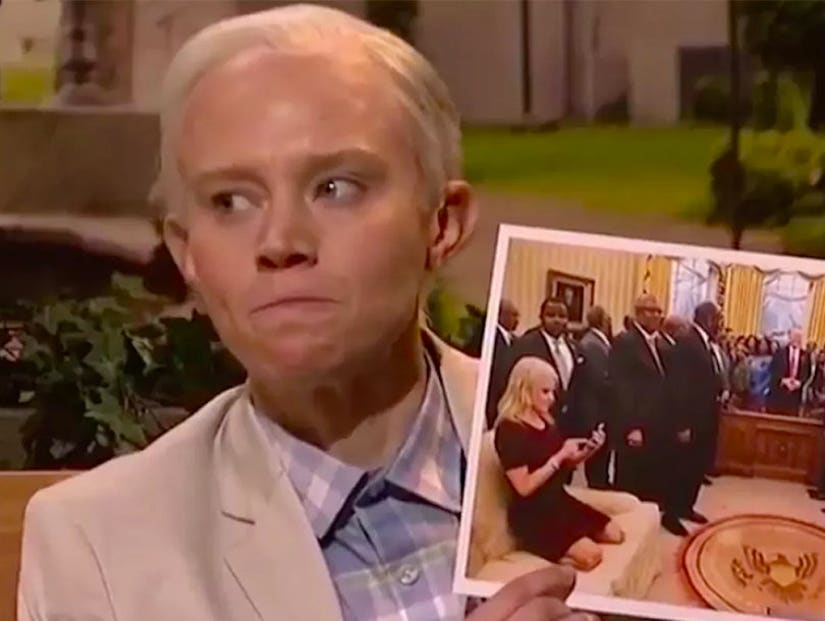 Here are the five funniest moments from "SNL":

Kate McKinnon played AG Jeff Sessions on Saturday's airing of the sketch show, likening him to a genteel but intellectually limited Forrest Gump.

"Being in the government is so fun. Have you ever been in it?" McKinnon asked her bus stop bench companion. "This is my best good friend, Kellyanne. She ain't got no legs," McKinnon said as she showed the now-infamous photo of Conway sitting with her legs folded underneath her on a sofa in the Oval Office.

Watch the rest of the sketch in the video above and see Octavia Spencer's special appearance as she reprises her role from "The Help" and offers McKinnon's Sessions poop pie.

"So many people keep coming up to me and saying, 'I loved you in 'Hidden Fences,'" Spencer said. "I get it. There were three black movies this year. That's a lot for America to handle."

Joking that she had a plan to profit from the continual mixup with a brand-new movie titled "Hidden Fence Light," Spencer said: "It's the story of three black women who send an introspective black boy to build a fence on the moon."

Watch the video above for the rest of Spencer's monologue.

The Republican Who Saved the World

Saturday's airing of "SNL" featured a spoof movie trailer in anticipation of which Republican will step forward to speak out against President Trump and save the country.

"It was a country in chaos," the spoof trailer's narrator said. "A nation divided. Led by a president with unchecked power ... until one Republican decided enough was enough. A patriot who put country over party, who finally stood up for his nation's founding values. A man by the name of ... TBD."

"And dad," brother Eric added. This didn't go over well with Donald Jr. who said: "No, no, remember, Eric: Dad does not tell us what to do anymore."

See the two play off one another in the video above.

Kellyanne Conway sits on everything

Though many expected Kate McKinnon to reprise her Kellyane Conway role in a big, produced sketch featuring this week's "Sofa-gate," the producers of "SNL" decided to play it cool.

Instead of making a production out of Conway's snafu, they simply incorporated McKinnon -- seated with her legs folded underneath her -- into several of the show's shots, almost as an afterthought.

Wait for it... #SNL pic.twitter.com/F0vf6NXyak