Alec Baldwin was noticeably absent as "Donald Trump" on "SNL," but Beck Bennett's Vladimir Putin more than made up for it.

The show opened with Putin commenting on the attendance of Trump's inauguration.

"Yesterday we all made Donald Trump the 45th President of the United States. We did it!" Bennett joked. "Today, many of you are scared and marching in the streets. You are worried that your country is in the hands of this unpredictable man. But don't worry. It's not. Relax, I got this. Putie's going to make everything okay. I promise that we will take care of America. It's the most expensive thing we've ever bought."

Poking fun at Trump's turnout for the Presidential inauguration, Bennett said: "I'm glad to see so many people turned up to your inauguration," showing a photo of huge crowds in Washington, D.C. "Oh wait, that's the Women's March!" he said as the studio audience cheered. "This is the inauguration," he said, showing the crowd from Friday's inauguration.

See the rest of the hilarious video (above) featuring Kate McKinnon as a Russian citizen forced to sing the praises of her country.

SNL ended the episode with a sendoff to President Barack Obama set to "To Sir With Love."

Cast members Cecily Strong and Sasheer Zamata stood in front of a portrait of Obama as they kicked off the song, thanking the former POTUS for his eight years in office.

Some of the song's lyrics include: "Those schoolgirl days of telling tales and biting nails are gone/ But in my mind/ I know they will still live on and on/ But how do you thank someone, who has taken you from crayons to perfume?/ It isn't easy, but I'll try."

Kate McKinnon got a musical number of her own when she broke into a spoof of "Roxy" from "Chicago" in character as Kellyanne Conway. Watch that must-see video above! 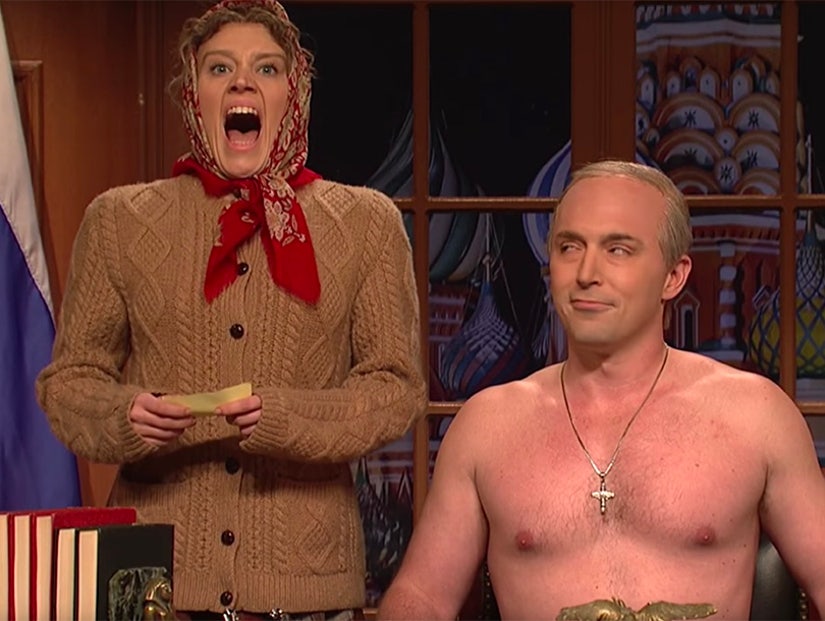