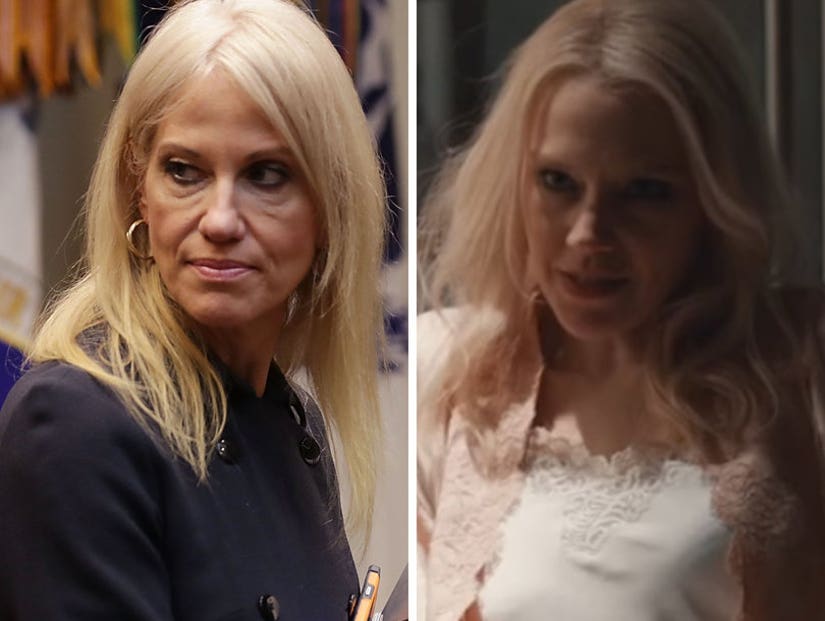 Kellyanne Conway took issue with the “Saturday Night Live" portrayal of her as an extra-intense version of "Fatal Attraction" character Alex Forrest, the role made famous by Glenn Close.

In a statement to “Good Morning America" on Monday, Conway said: “I appreciate the 'not funny, not fair' outrage from all political and apolitical corners. Things that aren't true don't bother.”

The skit in question features "SNL" star Kate McKinnon playing Conway as an over-the-top version of the “Fatal Attraction” psycho. In the 1987 thriller co-starring Michael Douglas, the character stalks and tries to kill the wife of the married man with whom she's having an affair. "SNL" actor Beck Bennett playing CNN anchor Jake Tapper took on the Douglas role in the sketch, which also features Conway seducing and threatening Tapper with a knife.

The NBC comedy show took creative liberties with the movie's original plot, and in the skit, Conway demands that she appear on Tapper's CNN show “State of the Union," to which he reluctantly agrees.

Conway then trips and falls out of Tapper's apartment window, seemingly to her death.

“Actually, I am fine, but I do only have three lives left,” a revived Conway says in the sketch. “See you in the news.”

Conway shared her initial reaction to the skit on Sunday via Twitter, saying, “Inquiring minds re: #SNL: @jaketapper & I spoke this morning just before brunch time. No boiling bunnies on the menu.”

Inquiring minds re: #SNL: @jaketapper & I spoke this morning just before brunch time. No boiling bunnies on the menu.

The "Fatal Attraction" skit comes on the heels of Tapper and Conway's recent interview that grew heated when Tapper pressed Conway to admit CNN is not "fake news" after her missteps over the “Bowling Green Massacre.”

Even liberals from the media who have openly criticized Conway in the past said “SNL” crossed the line.

Why am I watching this

SNL just gave a gift to the White House with this sexist, unfunny Kellyanne Conway skit.

She added, “Prediction: the White House will use that sexist skit to dismiss all criticisms of Conway and lying more broadly,” among other tweets.

Prediction: the White House will use that sexist skit to dismiss all criticisms of Conway and lying more broadly.

Casting Kellyanne Conway as Glenn Close was a miscalculation on SNL's part. Will be interpreted as unfair and mean to a wife and mother.

Jonathan Capehart of “The Washington Post” also took to Twitter to express his contempt for the skit.

Not sure about that Kellyanne skit. #snl

I sincerely hope #SNL gets better. The open was the only 5-star skit. #justsayin

Charles P. Pierce of Esquire wrote, “I suspect cries of sexism from the blood from her wherever/p----grabbing administration will lack a certain cred.”

Opinions were mixed among liberals and conservatives, with critics of Trump saying anyone in his camp is subject to these kinds of spoofs after some of the language he's used to refer to women in the past.

“She actually shamed rape victims so yeah no need to feel terrible," the user posted.

Whether or not poking fun at Trump and his team is justified, one cannot deny the sketches are successful: According to Variety, Saturday's episode generated its highest television ratings in six years.