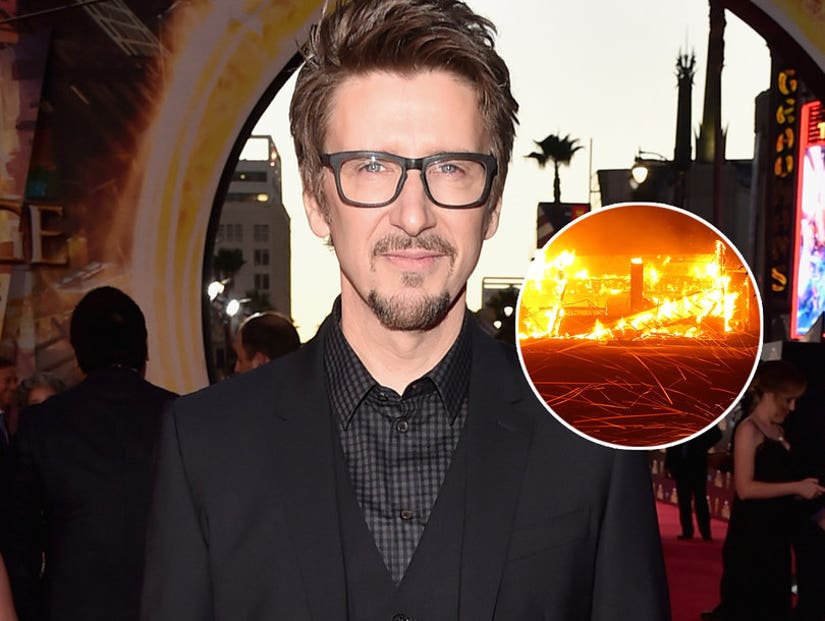 Melissa Etheridge, "The Office" star Rainn Wilson and the Kardashians are among the other celebrities on the run.

Camille Grammer posted a harrowing image of her home engulfed in flames to her Instagram page during the overnight hours Saturday night. "Sadly my house couldn't be saved," she captioned the image. "The courageous firefighters were able to save my cars and personal items recovered from my home. I thanked the fire captain and his team of firemen for all of their hard work."

Fellow "Real Housewife" Eileen Davidson also revealed that she was evacuating her home, posting a picture to Instagram from the midst of a line of cars all driving away from a smoky horizon.

Liam Payne tweeted Saturday, "I think I'm about to lose my house and its memories 😔even worse tragically people have died thoughts and prayers with everyone it's been a tough day let's hope it gets better."

The latest reports have the Woolsey Fire at 10 percent containment, according to ABC 7. Meanwhile, the LA Times' Carolyn Cole reports the Camp Fire remains less than 25 percent contained.

Kourtney Kardashian shared on her Instagram story Saturday morning that her Calabasas home is safe. "The fire was coming up the hill towards my house and just stopped on its own," she wrote over a photo of a burning hill.

Charlie Sheen took to this Twitter on Friday evening say he hadn't heard from his parents Martin and Janet Sheen who were at Malibu's Zuma Beach. Fortunately, Martin later told Fox 11 that he was safe and evacuated.

"We evacuated early this morning from Point Dume around 9:30, and we've been here ever since... Emilio, Ramon, Renee, Charlie... we're fine," he said. "We're at Zuma Beach and will probably sleep in the car tonight. We're just fine and hope you guys are, too."

Orlando Bloom posted a horrific image to his Instagram Friday night of his neighborhood being engulfed by flames.

"This is my street as of two hours ago praying for the safety of all my malibu fam," he captioned the pic. "Grateful to our brave firefighters please stay safe."

Will Smith also took to his Instagram Story Friday to share that his house was just a few miles from the wildfire.

"We haven't been told to evacuate yet, but Willow is nervous so she wanted me to go outside and make a Daddy assessment," he shared in the clip. "As soon as we get the word that we're in the evacuation zone, [it's] go now."

The mansion used on "The Bachelor" and "The Bachelorette" since 2007 in now in the line of fire. Producer Bennett Graebner told THR the patio was burning, the lower house has been destroyed and flames are moving to the main house.

The City of Malibu has been evacuated as the fire rages out of control.

According to TMZ, Caitlyn Jenner's Malibu home has burned down, as well as the "Westworld" sets on the famous Paramount Ranch in Agora Hills.

Other stars fearing for their homes include Cher, Kim Kardashian, director Guillermo Del Toro, and Lady Gaga, who posted Instagram Stories of her evacuation. 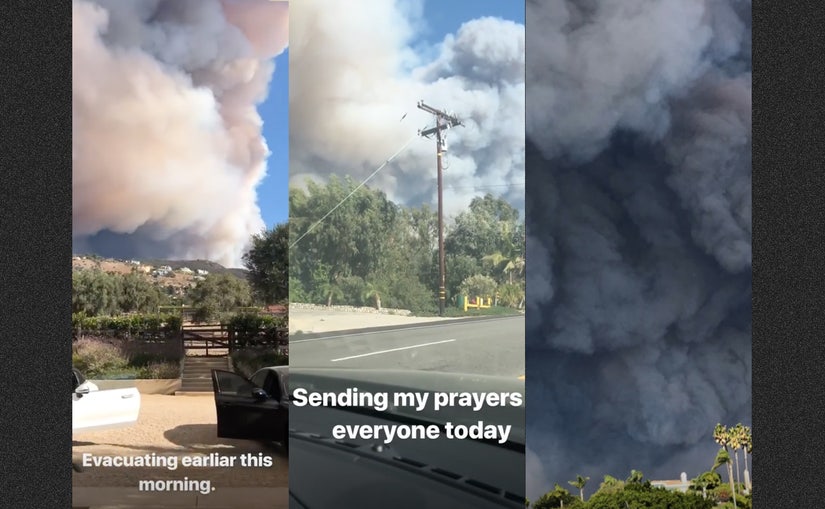 I heard the flames have hit our property at our home in Hidden Hills but now are more contained and have stopped at the moment. It doesn't seems like it is getting worse right now, I just pray the winds are in our favor. God is good. I'm just praying everyone is safe 🙏🏼

Fire Fighters, I love you and thank you for doing all that you can to keep us safe!

I'm worried about my house🔥, but there is nothing I can do.
Friends houses have burned🙏🏻
I can't bear the thought of there being no Malibu I've had a house in Malibu since 1972😭

Iam genuinely concerned about my home burning down it's right on the canyon in calabasas and I can't get home to any of my things right now. 😩🤞

Evacuated last night. Bleak House and the collection may be endangered but the gift of life remains. Thousand Oaks and Agoura are still in danger. Malibu is being evacuated.

Horses are finally safe. My children are safe. My home is in jeopardy but... everything with a heartbeat is safe. Thank you all for your concern.

To those who insisted on still being hurtful because our political affiliation is different, you are what is wrong with the country.

The fire is creeping closer to the city of Los Angeles. Flames have engulfed about 30 acres in the Griffith Park area, and the Los Angeles Zoo is evacuating animals.

Crews are battling a brush fire that broke out this morning in Griffith Park above the LA Zoo and just south of the 134 Freeway. As @RICKatFOX reports, this area is *not* as susceptible to the Santa Ana winds. 🙏 pic.twitter.com/3bfjakEgCT

"Doctor Strange" director Scott Derrickson has lost his home to the wildfires raging through some of the wealthiest areas of Los Angeles County this week.

"We lost our home, but we are all safe and that's the important thing," he tweeted Friday morning. "Gonna be offline for awhile." 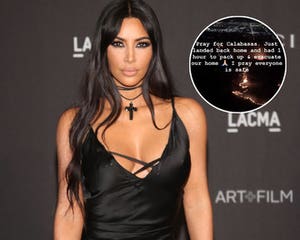 The Marvel filmmaker, whose credits also include horror hits "Sinister" and "The Exorcism of Emily Rose," had previously tweeted Thursday night that he was "fleeing the inferno" and then declared himself "safe." The writer, director and producer is married with two children.

We lost our home, but we are all safe and that's the important thing. Gonna be offline for awhile.

His famous friends have been chiming in with messages of support.

I'm so sorry to hear this. But I'm so glad you family is safe.

The fire that destroyed his home started burning at about 2:30 p.m. on Thursday in Woolsey Canyon, east of Simi Valley. As of 3:30 a.m. this morning, the Ventura County Fire Department said 8,000 acres have been burned and there was no containment or expected containment. So far, no injuries reported, but "many" structures have been damaged. About 75,000 homes in the area are under evacuation orders in Ventura and Los Angeles counties, and that's not even including structures in Malibu.

Derrickson is one of many famous figures in the entertainment industry fleeing their homes due to mandatory evacuations. As TooFab previously reported, Kim, Khloe and Kourtney Kardashian escaped the affected area Thursday night, along with Alyssa Milano. More recently, we've seen TV stars Rainn Wilson ("The Office") and Eddie McClintock ("Shooter") tell their fans they're evacuated and safe.

See video footage of the insane fires that are only being exacerbated by strong winds, followed by celebrities sharing their own experiences on social media.

We were forced to evacuate from our home today. We're safe, (Susan and the pups) all the rest is just stuff. Shit got real pretty quick. Now we just wait and see what happens. pic.twitter.com/4aGDHBpVwC

My House has been evacuated due to nearby fires in Thousand Oaks. (The pigs & dogs are fine, thank you) Please send your prayers to the people of Thousand Oaks and the victims of the shooting that are now having to evacuate their homes and neighborhoods. Then send them some cash.

That's it.
We've been evacuated from Old Agoura.
Things just got real.
Damn.

Thank you to everyone for the well wishes.
We have evacuated our home, and have found a hotel in West Hollywood.
So much respect for these firefighters. They are a rare breed.
Sending out love and safety to all those effected.

Well, well, as if life needed to get more interesting...we have a mandatory evacuation of our home due to the #Woolseyfire . We have gone to a hotel in Santa Monica where we will stay until we can return. Send love and strength to our amazing California firefighters. #safe

SOUTHERN CALIFORNIA! Anybody near #Malibu with a horse trailer, SYCAMORE FARM needs to evacuate 40 horses from 3661 Cross Creek Road before the fires get there! #WoolseyFire https://t.co/XJe0x85TBo

Thank you to so many people checking on me, Nathan and our dogs… 😌 Our Calabasas home is safe for now and Nate is updating me every 30 minutes. Praying for everyone who is evacuating 💔 #WoolseyFire

So scary! I am out of town for work and my family is evacuating! I feel so helpless and just want to be with my babies and my husband! #woolseyfire Everyone, please be safe. Wish I could get some real updates.