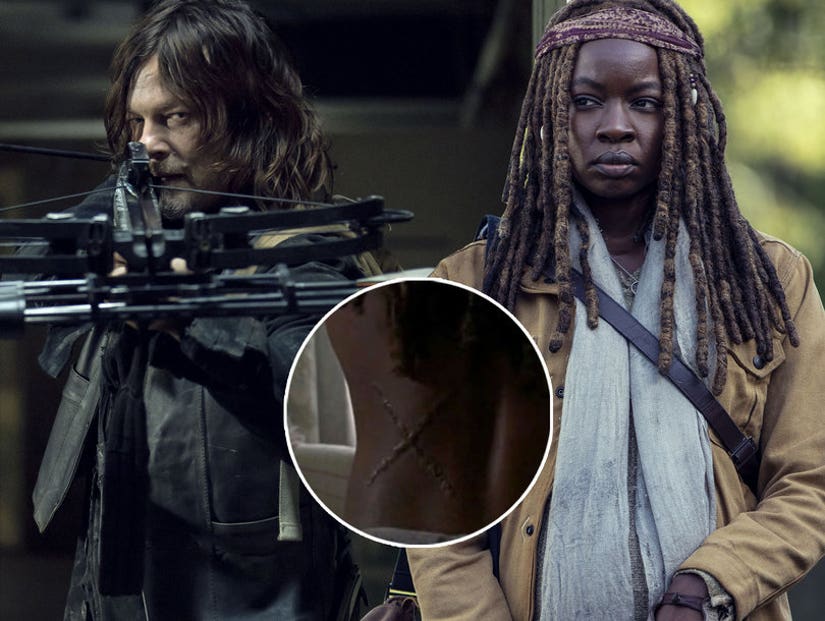 Ever since the time jump on "The Walking Dead," fans have been itching to know the stories behind the "X" scars on both Michonne and Daryl's bodies. Tonight, we found out and it wasn't pretty. Actually, it was pretty damn devastating.

No, as some fans have theorized/secretly hoped, the two did not give up their kidneys to save Rick at some point. In fact, the mystery had nothing to do with him at all and was instead much more sinister in nature. And while incredibly dark, it also did a really good job explaining why Michonne has been so untrustworthy of any newcomers in the back half of the season. 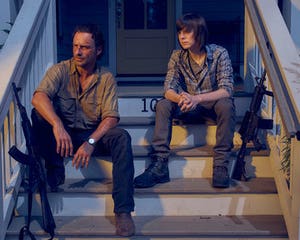 It also served as one helluva acting showcase for Danai Gurira, who was downright incredible this episode. Like Andrew Lincoln before her, Gurira deserves more recognition for her work on this show -- and she'll be sorely missed when she leaves next season. Let's also give it up for little Cailey Fleming, whose no-nonsense Judith has been a great addition to the show and a lovely scene partner for Danai.

We're going to break this recap up between THEN and NOW, starting with the good stuff -- that backstory. 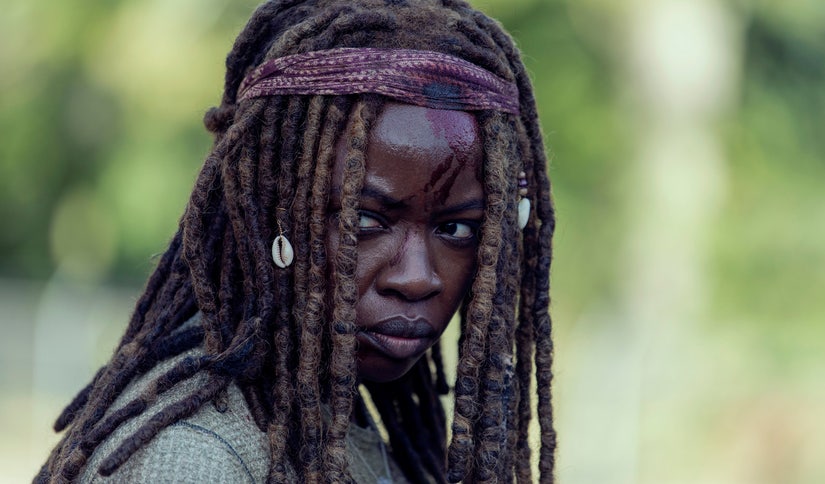 The hour began in the past, in the months after Rick's disappearance. Michonne was visibly pregnant throughout the flashbacks, as she and Daryl searched the riverbank for their lost friend. While his love found is gun, neither of them ever located a body. "Followed this to the ocean and back," said Daryl, "ain't nothing out there either."

Back in Alexandria, a group arrived looking for help, someone from Michonne's own past. While we know her as Rutina Wesley from "True Blood," she's known as Jocelyn on the show, a woman who was once very close friends with our favorite survivor before the world went to hell. She's been holed up nearby with a group of children, who were all taken in by the community.

Though it was nice to see Michonne smiling for once as she and her former bestie became reacquainted, we all knew it wasn't going to last. In the morning, they woke up to find Jocelyn, their food, medicine and even their own children -- Judith included -- all missing. They also killed an Alexandrian on the way out the sewer.

Obviously, this was a huge blow to Michonne, who took on a heavy helping of guilt for letting her guard down. This was bad and would haven been enough to make her skeptical of outsiders for good ... but then it got worse. 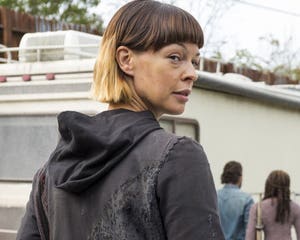 After she and Daryl found the kids at a nearby school house, some serious "Children of the Corn" vibes followed. The kids attacked and our two heroes were knocked unconscious. When they awoke, they were hanging from the ceiling as a tot named Linus -- of course his name was Linus -- branded them both with Xs. And there you have it, mystery solved!

Jocelyn, now in total crazy mode, said she was simply teaching the kids how not to be soft. As for the brands, their motto seemed to be "Mark our kill, kill our mark." A scuffle ensued, ending in Jocelyn's death by the hand of her former friend.

Then came the most disturbing moment of the episode, as Michonne was forced to fight off and kill a tiny army of children who refused to back down. This was all intercut with Michonne killing a horde of walkers in the current day, so we didn't see her strike the kids. The sight of her surrounded by their lifeless bodies, however, was chilling.

Judith emerged unharmed, though slightly confused, which would be explained in the present. Which brings us to ... 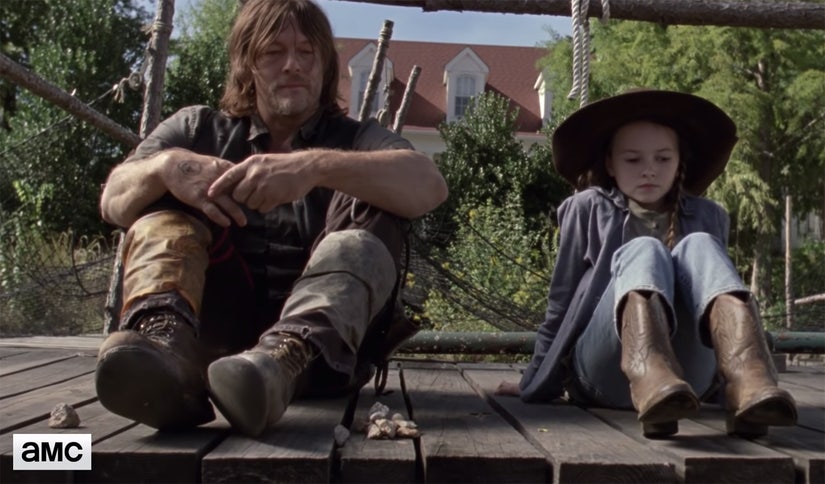 In the current timeline, Daryl showed up to Alexandria with a wounded Henry, Lydia, Connie and Dog. While Aaron was dubious about letting Lydia in, Michonne trusted Daryl and allowed them entry to get Henry all stitched up.

While Henry wasn't to thrilled about his scar, Lydia was cool with it. "I like it, you'll never forget what you did. Neither will I," she told him. You sensing a theme here, in an episode titled "Scars"? Subtle.

Lydia then had some girl talk with Michonne, who basically told the ex-Whisperer to beat feet to save those around her. "If I could just walk away and take all the risk with me, if that somehow could make everyone else safe, that wouldn't be so hard," she told her. "Think about that."

Meanwhile, Judith's been grappling with her mom not allowing newcomers into the community. After Daryl's group left for Kingdom, she snuck out to follow them, something Michonne didn't notice until the next day. It was Negan who filled Michonne in on her own daughter, telling her the little girl appreciates someone who "shoots straight" with her. "She hates that you're not letting new people in," he said, before bringing up Carl's letter.

"Maybe she is exactly like her mother and she is not taking shit lying down," he added -- and she sure wasn't. The next time we saw Judith, she was killing walkers by herself in the middle of a field. Little ass kicker for life! 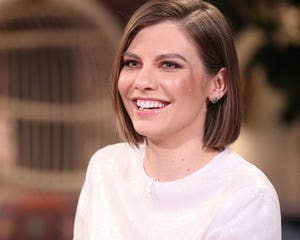 Yeah, she needed some last minute saving from her mama, but Judith also helped Michonne see the light. "Loving someone means doing whatever it takes to make them safe, right?" she asked. "When did we stop loving Daryl and Maggie, Carol and the King?" That one had to hurt, because it stung to watch.

Following Negan's advice and shooting straight with her daughter for the first time in a long time, she explained that she was more scared than she'd ever been after Rick's disappearance and Judith's brief kidnapping. "So we decided to make this place only about the people who lived here and that's not what Carl or your dad gave their lives to create," she admitted, "but it kept you and RJ safe. That's what I wanted."

Telling Judith she's right, Michonne added, "We have to protect the people we love, all the people we love and we will." With that, they hitched a topless car bed to some horses and took off to the Kingdom, picking up Daryl, Connie, Henry, Lydia and Dog on the way.

While everyone's headed to the fair, it's not all puppies and rainbows. The episode ended with two Whisperers learning of the Kingdom's location, with one saying, "We must tell Alpha."

Just two more episodes to go this season and with everyone all in one place for the festivities next week, it's only a matter of time until everything starts crashing down. 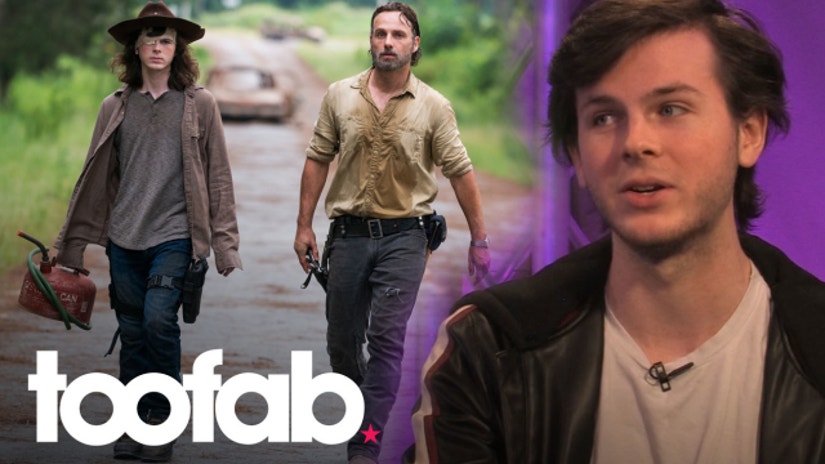