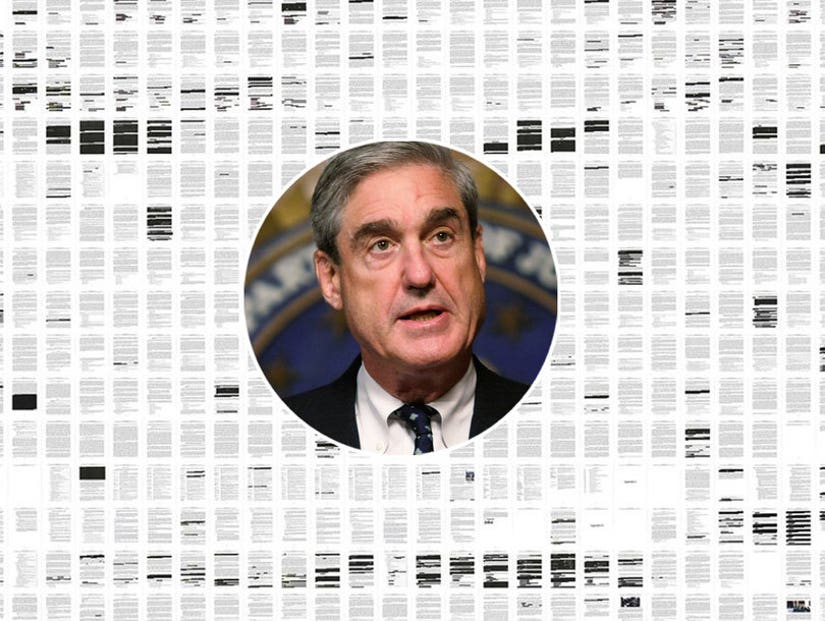 "Found what it said in about a minute."

The Mueller Report was finally released to the public on Thursday... or some of it, at least.

Twitter was up in arms about how much of it was redacted, despite reports it would only be "lightly" obfuscated.

Attorney General William Barr had previously warned there would be four different color-coded types of redaction, for four different reasons: grand jury information, sensitive intelligence about sources and methods, material affecting peripheral third parties, and material about ongoing information (such as Republican activist Roger Stone, who has pleaded not guilty to lying to Congress).

But that didn't stop wily internet users from figuring out ways around the heavily blackened-out document.

Here's the redacted tweet that I quickly found via the citation in the #MuellerReport pic.twitter.com/xcB4umy5pr

One Illinois reporter for example, Rachel Droze, figured out that a tweet had been redacted for fear it would could harm an ongoing investigation; however the footnote detailing where and when it had been posted, was not.

"Randomly started reading the #MuellerReport on page 150 of Volume II. Made it to page 151 before realizing that one of the 'redacted items' was cited as a Tweet from @realDonaldTrump (with time and date) and found what it said in about a minute..." she boasted.

She then posted the erased tweet, in which Trump praised Roger Stone for not spilling his guts.

Another Twitter user, Roger Sollenberger, figured out that when certain names continued on a second line and were redacted — and that if that redaction was very short — it could only contain a suffix like 'Sr' or 'Jr'... and there's only one "Junior" Robert Mueller would be interested in.

"WOW: The second redaction here is almost without a doubt Donald Trump Jr #MuellerReport," he tweeted, with an example.

All in all, the 448-page document contained almost 900 individual redactions — some encompassing entire pages — which was the subject of as much satire as ire on Twitter.

While some members of congress are being permitted to see a less-redacted version, House Democrats have indicated they will will subpoena the full, unredacted report.

This is one of the craziest Western blots I've ever seen! #MuellerReport pic.twitter.com/AAznGCsGEJ

This may be my favorite redaction of all time. pic.twitter.com/jYi7raMtmI

Most disturbing redaction of the day. pic.twitter.com/13ml8eqd8J

The redacted #MuellerReport is out! And this is what it reveals...

EXCLUSIVE!! A page of the redacted #MuellerReport has been LEAKED! Have a sneak peek below pic.twitter.com/WzcwioUZb5

Does Trump also have a printer cartridge company & is he financially benefiting off of the printing of the redacted report? pic.twitter.com/d7qJZpqfmS