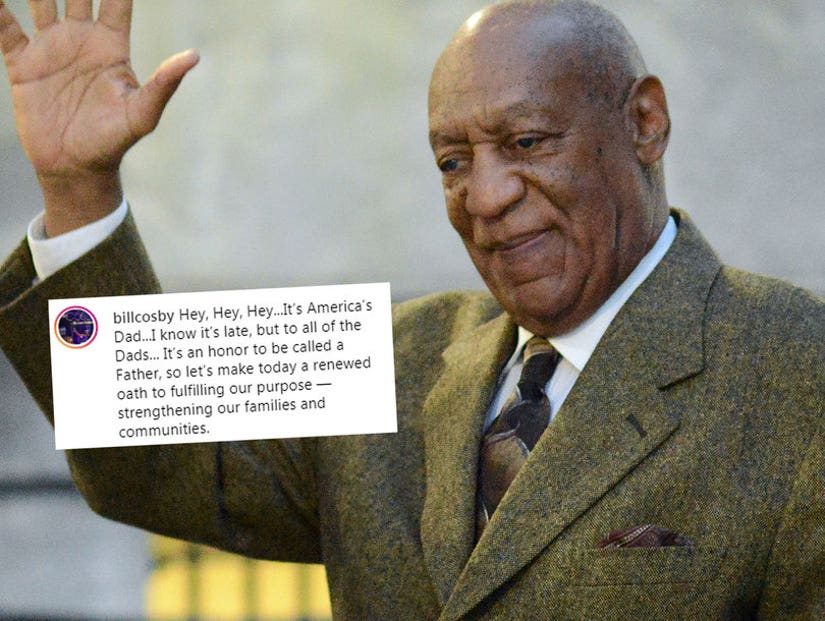 O.J. Simpson also joined Twitter over the weekend, leading to a lot of anger and confusion.

Bill Cosby may be behind bars, but he's not off Twitter.

The actor began trending for all the worst reasons after a tweet from his official account went out on late Sunday for Father's Day, sparking major backlash.

"Hey, Hey, Hey...It's America's Dad," read the message. "I know it's late, but to all of the Dads ... It's an honor to be called a Father, so let's make today a renewed oath to fulfilling our purpose — strengthening our families and communities." He included the hashtags #HappyFathersDay, #RenewedOathToOurFamily, #RenewedOathToOurCommunity, #AmericasFavoriteDad and #FarFromFinished.

He attached a video of himself from the 1968 TV special "Black History: Lost, Stolen or Strayed."

Cosby's spokesman told USA Today the actor specifically requested a message be posted from him on social media. "Mr. Cosby's (message) consisted of telling these men who have been incarcerated for many years, but are up for parole soon...to...take the word 'disadvantage' and remove the 'dis,' and start focusing on the advantage," read the statement. "That advantage is to be better fathers and productive citizens."

Cosby is currently serving three to ten years in prison for drugging and sexually assaulting Andrea Constand in 2004, something many on Twitter were quick to bring up when they reacted to the tweet. Many others also mentioned O.J. Simpson in their outrage, as he also joined Twitter over the weekend, vowing to "challenge a lot of that B.S." about him in the media.

O.J. was accused of killing ex-wife Nicole Brown Simpson and her friend Ron Goldman in 1997. Though he was acquitted, he was found liable for the murders in a civil trial. He later served prison time for a robbery and kidnapping conviction in Las Vegas and was released in 2017.

Here's what Twitter has to say about both men popping up on social media:

It's not even that they appeared out of nowhere, it's that OJ Simpson appeared and said he has a little getting even to do and Bill Cosby came in with “it's America's dad,” like we're in some kind of Twilight Zone funhouse mirror hallway

Bill Cosby, O.J. Simpson and Trump all tweeting on the same day.
Computer: end simulation.
Please.
I beg you.

Bill Cosby has three and a half million followers?

You people should be ashamed of yourselves!

Bill Cosby is tweeting. He should be in a cell not on one.

Let's all take a moment to be happy OJ Simpson joined Twitter and not Trump's cabinet. It's the little things these days.

When you tweet at OJ Simpson and he replies: pic.twitter.com/DwaazqpW3F

OJ and Bill Cosby tweeted. Today was a lot.

OJ Simpson: I'm here to get even

Are we due for a 4th Horseman?

Because I'm pretty sure Armageddon is nigh.