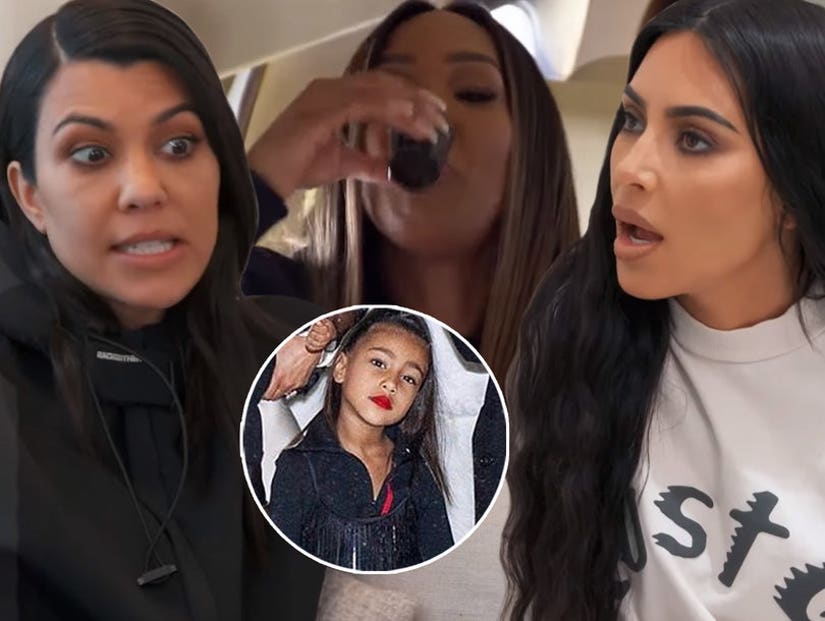 "As for 'exposing' Mommy, that was never my intention, but if she wanted our conversations to be kept private, she should have asked me to sign an NDA," writes Nori's Black Book. 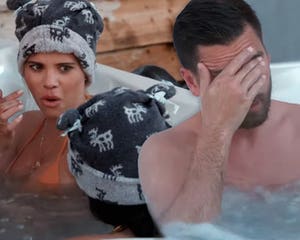 Sunday's episode of "Keeping Up with the Kardashians" started with Kourtney petitioning her sisters and Kris to go on a trip to Finland. No one was interested.

The last time I went on a trip with Auntie Kourt, I ended up paying for it because her money from POOSH hadn't hit her bank account yet. So, yeah, I think I'll pass on Finland. -NW

At Kim's house, Kim told Kendall that North was obsessed with JoJo Siwa. JoJo sent North a huge package and offered to surprise her in person. Kim thought that for North to meet JoJo would be the best day ever.

Truthfully, any day without Saint is a "best day ever." -NW

At Kourtney's house, Kourtney, Kim and Scott discussed the trip to Finland. At first, Kourtney wanted the trip to be a girls trip, but it seemed like the activities were more geared toward her kids. The dates of the trip fell on spring break, and Scott didn't want to not be with the kids, so he wanted to come along. Kourtney had the idea of inviting Sofia to Finland as well. Scott said they had been on a family trip with Sofia before but that, in the past, she'd felt left out. Scott wanted to work on that for the Finland trip.

Once Auntie Kourt saw all the fun activities for kids, she automatically thought to invite Sofia. It was nice that Auntie Kourt took her into consideration. Sofia got her permission slip signed by Lionel Richie and was ready to go to Finland! -NW

At Khloe's rental home, Khloe talked to the twins, Khadijah and Malika, about their upcoming birthday. Khloe had the responsibility of the planning, so she decided that they would go to Las Vegas. Malika's boyfriend, O.T. Genasis, was set to perform at a club while they were there, so they planned to go see him perform. Malika wanted everyone to drink all day and live it up, but Khloe didn't think she was in the right headspace to get drunk. The last time she and Malika got drunk in Palm Springs, it didn't go so well for her because she was an emotional wreck over Tristan hooking up with Jordyn.

I was happy to give the Malikas some time off so they could celebrate their birthdays. I had all of the staff sign a card for them, and I brought in donuts. I also let the Malikas pick one thing out of my closet. I want all my employees to feel special on their birthdays. -NW

In the car, Kourtney informed Khloe she was going to Finland for spring break with her kids, Scott and Sofia. Khloe thought inviting Sofia was nice of Kourtney and congratulated her on being a great co-parent. Khloe wanted to know if anyone had asked Sofia how she felt about going on family trips. Kourtney said she hasn't, adding that it was up to Scott and Sofia to have those types of conversations.

At Kim's house, Kim talked to Kris about JoJo Siwa asking North to be on her YouTube channel. Kim was not sure she should let North do it. North seemed really excited, but Kim didn't want her to feel like it was a priority or a "work thing." Kardashian thought that filming with JoJo would be potentially overwhelming for her daughter. But Kris told Kim to let North have fun, create some boundaries and don't take it too seriously. Kim agreed and said she'd make sure it was something North wanted to do.

Kris wanted me to film with JoJo Siwa because she gets 10 percent. Don't let her fool you with this "concerned grandma" act. I was looking forward to working with JoJo, but definitely expressed my concerns early about the screaming. Her team promised us that she would dial it back for our shoot and that she would not abuse glitter while on set, so I signed on to do the project. This wasn't about fun; this was about getting in front of a new audience and expanding my reach. -NW 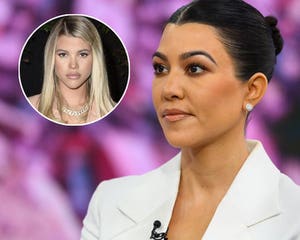 While Kourtney, Scott, Sofia and the kids traveled to Finland, Khloe, the twins and their friends flew to Las Vegas. Malika wanted everyone to get drunk and lose control, so as soon as they touched down, the party started with everyone taking shots. Khloe didn't want to get too drunk because she wanted to make sure no one had to babysit her, but Malika started getting annoyed that she wasn't partying. She was kind of turning into a birthday monster.

At the club where O.T. Genasis was performing, Malika got trashed. Khloe and Mailka started having an argument, but Khloe didn't even know what they were fighting about. Khloe eventually called it a night and went to bed.

One of the Malikas got drunk at the Christmas Eve party and tried it with me. I immediately had her removed from the property, suspended her for a month without pay and made her change all the labels on Mommy's shapewear line from Kimono to SKIMS. She's lucky she still has a job. -NW

In Finland, Scott was feeling the pressure because the "KUWTK" camera crew was present. Sofia had never really filmed before, and Scott wanted to make sure she was comfortable. Scott said that he and Kourtney have so many inside jokes that it's sometimes hard and awkward for Sofia to see or be around. Sofia said she noticed that Scott acts more sophisticated when Kourtney is around, yet acts like a 5-year-old when it's just them two.

Scott acting like a child when he's alone with Sofia is just him just trying to relate to her and make sure they have something to talk about. Sofia sounds real ungrateful. -NW 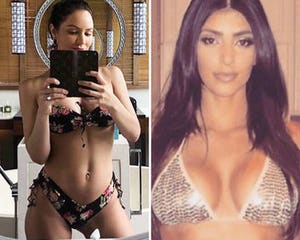 Kim ultimately decided to let North film a YouTube video with JoJo Siwa. She and Kanye thought that if this was something North wanted to do then they should let her do it. North appeared shy and awkward, so Kim had her FaceTime a friend to loosen her up. North danced with JoJo for her friend, and it seemed to get her out of her funk. North then exposed Kim by saying that she said that JoJo screams a lot. Kim denied ever saying that and said she was saying that North needed to match JoJo's energy. Kim was clearly embarrassed by being outed.

I admit that I was not feeling it at first, but once I was able to FaceTime a friend and make them jealous, I was back in my groove. JoJo was professional, but the screaming was a lot. I think the video was great for my brand, but I never need to do that again.

As for "exposing" Mommy, that was never my intention, but if she wanted our conversations to be kept private, she should have asked me to sign an NDA. -NW

Back in Finland, Kourtney, Scott, Sofia and the kids visited elves. Scott and Sofia were not really interested in it, so they abruptly left and decided to take Mason with them because he was sick. Later in the hot tub, Kourtney helped Sofia fix her makeup because it wasn't completely blended in, while Scott complained that they flew all the way to Finland just to be in a hot tub. Kourtney called him negative and brought up that he left the elf experience. Kourtney couldn't understand why Scott was acting like this.

Later, Scott FaceTimed Kim and told her that the trip had been weird. He was trying to pay attention to everyone and not neglect anyone, but it was hard. He explained that he and Kourtney have so much history, so he had been trying to be mindful of Sofia, which was all just stressing him out. He acknowledged that he wasn't being fun because and that he was also feeling the pressure of having the "KUWTK" cameras present. Kim advised him to not be discouraged and told him he'd figure it out. 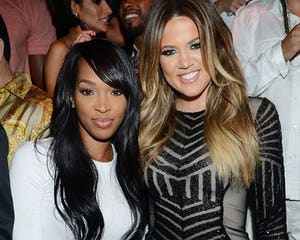 Scott confided in Kourtney that he wanted everyone to be comfortable but that it was hard because Sofia doesn't always fit into everything all the time. He said he was trying to juggle everything and that the "KUWTK" cameras were a lot. Kourtney said that she would have reached out to Sofia and made her feel more comfortable about the filming had she known it was an issue. Scott apologized that the trip didn't live up to Kourtney's expectations. Kourtney said Scott puts too much pressure on things to be perfect and that she just wanted him to be in the moment and have fun.

Scott eventually spent some alone time with Sofia after he realized that everyone was okay. Scott recognized that the problem was him and his insecurities. Kourtney loved the trip and thought it was nice they all got to experience it together.

Honestly, I would rather eat glass than go to Finland or anywhere with these people. What did I just watch? This has to be one of the most boring family trips ever filmed in the history of this show, and I'd like to personally apologize to our viewers. I will speak with our writers. -NW

Back at Khloe's rental home, Khloe talked to Malika about Las Vegas. Malika assured Khloe that she had a great time in Vegas and apologized for being annoying. Khloe said she had fun but that Malika was not being a good friend by pressuring her to drink. Khloe forgave Malika because it was her birthday, so she had a pass.

I think this friendship is inspiring. I also think the Malikas are Auntie Khloe's only friends, so she's not really in a position to stay mad at them for too long. -NW