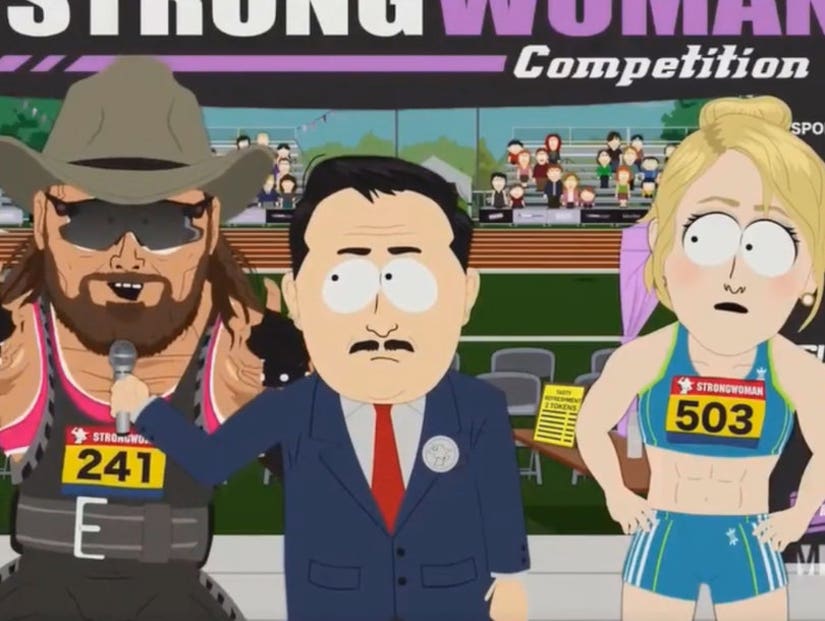 This is not the first time the animated show caused an uproar over LGBTQ+ topics.

"South Park" waded into the controversial topic of transgender women in competitive sports.

After Strong Woman -- who is defending her title at the "Strong Woman Competition" -- says she is "honored to be part of history" competing with transgender athletes, Heather reveals she has only started identifying as a female "two weeks ago" and is "ready to smash the other girls."

"I'm not here to talk about my transition. I'm here to kick some f--king ass. Let me tell you something -- I'm gonna roll up the other women here, and I'm gonna smoke 'em. I am the strongest woman this state has ever seen," Heather exclaims.

Heather dominates the sporting events, and ends up calling Strong Woman's husband a "transphobe" after he questions what he believes is Heather's unfair advantage, saying she "went through puberty as a male, so your body is completely different."

An all-girl game group at the elementary school eventually defeats the "unstoppable" Heather by playing board games, as Heather calls the competition unfair since she was born a man and claims men don't read board game instructions, like women do.

It is later revealed that Heather is actually Strong Woman's ex boyfriend, disguised as a transwoman to seek revenge on Strong Woman for embarrassing him years earlier.

The trans athlete debate has divided the competitive sports world as some argue the inclusion of biological men in female sports would leave cis women athletes at an unfair disadvantage.

Supporters of inclusion say there is no scientific evidence behind this belief.

"The myth that trans women have a 'direct competitive advantage' is not supported by medical science, and it continues to stoke fear and violence against one of the most at-risk communities in the world," wrote Congresswoman Ilhan Omar in a letter to her state attorney regarding the investigation of USA Powerlifting not allowing biological males to compete as women, according to The Minnesota Sun.

A recent paper in the "Journal of Medical Ethics" titled "Transwomen in Elite Sport: Scientific and Ethical Considerations" regarding the International Olympic Committee's decision to allow trans athletes to compete concluded that "the advantage to transwomen afforded by the IOC guidelines is an intolerable unfairness." However, the journal stated: "This does not mean transwomen should be excluded from elite sport but that the existing male/female categories in sport should be abandoned in favour of a more nuanced approach satisfying both inclusion and fairness."

And both sides of the debate took to social media to prove their cases as Piers Morgan posted, "Bitingly sharp -- and brutally honest. Women's sport is going to be destroyed unless authorities deal with this issue asap," while another follower disagreed with, "@ComedyCentral So @SouthPark has done a lot of bulls--t in the past, but this latest bout of completely ignorant trans-misogyny has broken me, I'm f--king done when this uneducated, hateful s--t."

This is not the first time "South Park" has covered controversial issues with the trans community, as a 2014 episode titled "The Cissy" had the character Cartman claiming to be "transginger" in order to use the girl's bathroom.

Bitingly sharp...and brutally honest. Women's sport is going to be destroyed unless authorities deal with this issue asap. https://t.co/SMHWT417sV

@ComedyCentral So @SouthPark has done a lot of bullshit in the past, but this latest bout of completely ignorant trans-misogyny has broken me, I'm fucking done when this uneducated, hateful shit.https://t.co/9dSm0aYI4s

When South Park makes more sense than anything else on TV. https://t.co/aoObVJrxC3

Yeah, I can't really watch South Park easily any more. They keep "delving" into trans stuff and it's really awful each time.