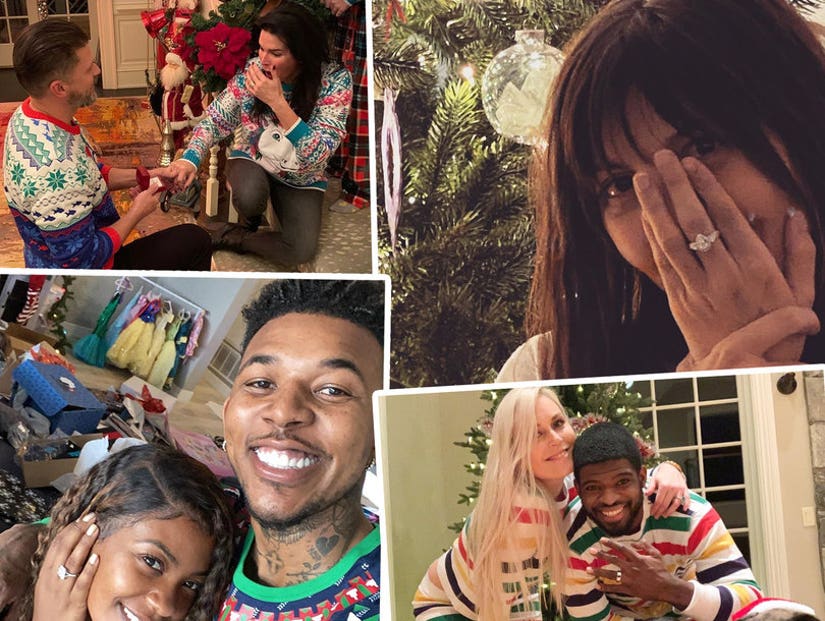 Wedding bells are ringing for these couples!

The holiday season is all about love -- and with that came a few exciting proposals and "I dos."

You may have heard sleigh bells ringing and champagne glasses clinking, but these celebrity couples heard wedding bells instead as they celebrated Christmas, New Year's Eve and their December vacations with their other halves.

Wilmer Valderrama got engaged to his girlfriend Amanda Pacheco on a beach in San Diego on Wednesday to ring in the new year.

The entire ceremony was just under 14 minutes but I have to give you guys the uncut first 75 seconds. LOVE IT! We promised you atypical. We are in love and we cannot stop laughing. Thank you @LilyTomlin and Jane Wagner!#HappyNewYear pic.twitter.com/O5vOss3TCD

Comedian Kathy Griffin married her boyfriend of eight years, Randy Bick, on New Year's Day, just a few hours after getting engaged. On New Year's Eve, the couple shared on Twitter and Instagram that they were going to be getting married after midnight. Griffin even wore the same dress from her first formal date with Bick back in 2011. How sweet!

What's even more amazing? The ceremony was officiated by actress Lily Tomlin. Check out "an unedited hilarious and fun beginning" to the ceremony in the clip, above.

Multiple congratulations are also in order for Michelle Williams, who is not only engaged but also expecting! The actress is engaged to "Hamilton" director Thomas Kail and she is pregnant with their first child, per People. Williams' child with Kail is her second, as she also shared daughter Matilda, 14, with the late Heath Ledger.

"I got to marry the love of my life, and hopefully will never have to look at a seating chart again for as long as I shall live," Foster captioned a post on Instagram, above.

According to the publication, who shared multiple exclusive photos, Facinelli, 46, popped the question while the couple was at romantic dinner at the beach. The actor's daughters, whom he shares with ex-wife Jennie Garth, and Harrison's parents were all there to celebrate.

"I never thought one of the best days of my year would happen the last week of the year," she captioned the post. "I get to marry my best friend. We're ENGAGED!! So excited to become your wife. D&D until the end."

Garrn shared a selfie of the two locking lips and flashed her stunning engagement ring. "Christmas Eve the love of my life surprised me on his knees asking me to be his forever," Garrn captioned the pic. "He changed my life the day we met and showed me what love really is — so yes I cannot wait to spend every day (well almost) of my life with you."

The pair, who have been dating for about 10 months, announced the exciting news on New Year's Eve.

Merry Christmas and happy holidays everyone!! On our 2 year anniversary, in a “non traditional” move, I asked PK to marry me and he said, Yes ☺️! Women aren't the only ones who should get engagement rings! #MerryChristmas #equality pic.twitter.com/hhdm85RoWi

Lindsey Vonn and P.K. Subban have been engaged since he popped the question over the summer, but this time, she did the asking.

On their 2 year anniversary, Vonn got down on one knee and asked PK to be her husband.

"In a 'non traditional' move, I asked PK to marry me and he said, Yes!" she shared on Twitter. "Women aren't the only ones who should get engagement rings!" she wrote alongside a photo of his ring.

Actress Angie Harmon and soap star Greg Vaughn had a "Marry, marry Christmas!!" The couple got engaged with their combined six children in attendance.

Harmon, who has reportedly been dating her now-fiance since 2017, captioned her photos with "#ModernDayBradyBunch"

Iggy Azalea's ex, Nick Young, also popped the question to his longtime girlfriend, Keonna Green, over the holiday. With the help of his son, Nick Jr., Young pulled off the proposal Christmas morning in front of the couple's three children.

Young could be heard telling his high school sweetheart that this proposal is "way overdue."

Imagine Dragons frontman Dan Reynolds re-proposed to his wife, Aja Volkman, after they separated in 2018. The couple split last year and reconciled in January 2019 after seven months apart. They welcomed their fourth child later that year.

Volkman shared a photo of her new ring accompanied by a long, heartfelt post. "Tonight we put our kids to bed and began to clean up the mess of the day. I could see that he was nervous but I didn't know why. He got on one knee and before he could open his mouth I began to cry. Loaded tears that held nearly 10 years of growth. The answer has always been yes. Even before we knew what that meant," she wrote.