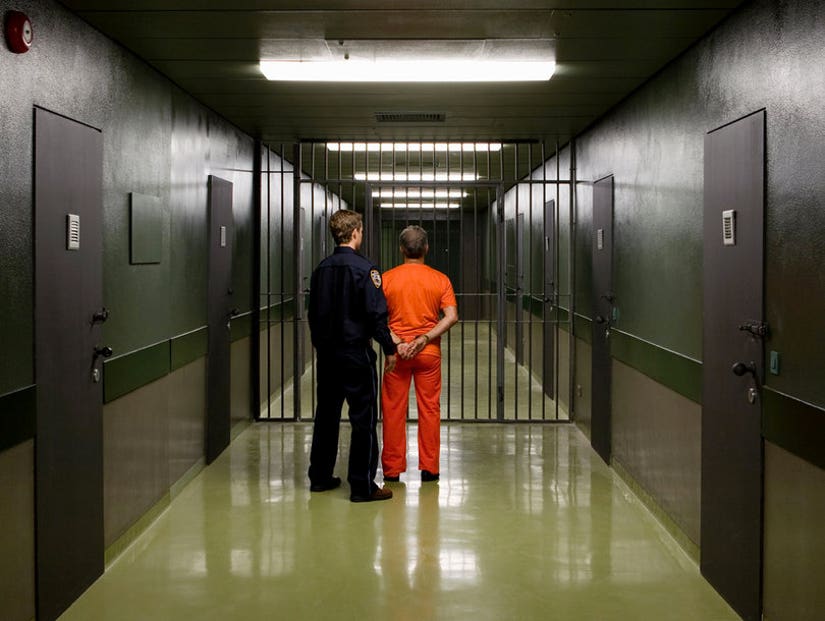 "Jail is not the lawless Wild West I'd feared. In fact, it's quite the opposite. There are laws. Lots of them. And I'm not talking about what the guards enforce."

(This is a guest column for TooFab -- Views, thoughts and opinions expressed in this piece belong to the author alone)

I'm 21 years old. I got a DUI, and missed a court date. I went to the police station to try sort it out, expecting a fine, a reprimand and a new court date. Instead, I was taken to jail. Here's what I learned.

I'd never been inside before. I didn't know what to expect. I was nervous. I had turned up to the police station wearing nice clothes, expecting to go out that night. Instead, I found myself standing in a cell, in an orange jumpsuit, with a pillow tucked under my arm, wondering if I was going to have to fight someone, as TV depicts.

"Omar", as it turns out, was just a junkie, medicated out of his mind, and only a danger to himself, via overdose.

Jail is not the lawless Wild West I'd feared. In fact, it's quite the opposite. There are laws. Lots of them. And I'm not talking about what the guards enforce; the inmates themselves have an entire complex system of rules — and punishments — and my big takeaway from my week inside was just how smoothly — and fairly — that system is run.

Once inside, I was approached immediately and asked: "What are you?"

"Like a gang?" Already, I feel like my life is in the balance, depending on my next answers. "I ain't in no gang..."

Turns out I don't have a choice — everyone in jail is immediately assigned to, for want of a better word, a gang. Which are mainly separated by race. There are four options: Brothers, Woods, Homies, Paisas.

Luckily for me, I am, I discover, a Homie. And in this jail, the Homies are the dominant race … simply because there is more of them. Each race has its own individual laws, but the Homie laws supersede all.

It doesn't matter if you are in for a week, like me, or life, like some of the people here are. The rules apply for everyone.

My set of rules are written down for me on the back of a Bible. I'm told I have a three day grace period within which I can contravene without fear of reprisal. After that though, I am warned, there are consequences. It could be a "workout". It could be a "2-on-1". I'll get to that in a minute.

For example, you have to make your bed every morning. This is something I thought the guards would enforce, but it's actually the inmates.

There are a lot of rules about eating. You must only dine with your own group, and as a group. When you're finished, everyone bangs the table and gives thanks. Everyone cleans up after themselves. No-one leaves until everyone is done. And most crucially — ABSOLUTELY NO-ONE uses the toilet while anyone is eating. This is a big no-no.

I forgot and went to take a whizz once during a meal-time. Thank Christ it was during my three-day grace period.

While trading food is allowed, we were not allowed to trade "open" food with the Brothers. You can give or take a sealed packet of chips, for example… but not an open bag, under any circumstance. I'm still not sure why.

Everyone must wear their 'colors' - no exceptions. Your 'colors' being your uniform. Mine consisted of white slippers, orange trousers, white t-shirt, orange shirt, buttoned up. Always. Each race has their own dress code, however. The Brothers were permitted to wear just their white T-shirts.

The rule which surprised me most was we were not to disrespect the female staff. There were female medical staff who came in to administer drugs; I was instructed not to degrade them, speak to them disrespectfully, and definitely not come onto them or try chat them up. Not that that was something I wanted to do; it just surprised me they cared about such things.

Also, you must pay 10 percent tax.

There is a commissary; think of it as a convenience store. You can buy things like extra food, such as chips or ramen (which is tricky to cook with no boiling water or microwave… just hot water and a lot of time), or items like slippers, toothbrushes, or toothpaste.

You build up credit, either by working at the jail, or by family and friends paying into your account from the outside.

But whatever you spend, you must offer something 10 percent the value to the Shotcaller. Fascinatingly, it isn't some sort of protection racket, but a welfare system. The extra items go into a pool for inmates who are not fortunate enough to have people who care about them on the outside, and who cannot buy things from the commissary themselves.

How does the Shotcaller know what you are spending? Because you are always shadowed when you use the commissary. That's not a rule, but a recommendation. Not to ensure you are paying the correct tax, but to make sure you are not jumped on while using it. Same goes for using the phones. The cords are so short, you are forced to turn your back when using them, so it is always recommended that you have a shadow. You lose some privacy, yes, but its a price most people are willing to pay.

What happens when you break the rules

As I mentioned, breaking the rules results in either a workout, or a 2 on 1. In my week there, I was involved in both.

It took me three tries in total. The second time I was on the final line when I dropped one. Oh, and someone is shadowing to make sure you do it properly. If you don't, you punishment moves onto a 2 on 1.

A 2 on 1, is exactly as it sounds. You are the one, and you get beaten up by two people.

I witnessed it once. Very closely.

What happened: one of the guys — a Paisa — was taking a shower, and had no soap. He asked one of the Brothers for some. The Brother complied.

The thing is, nothing in jail comes for free. The Brother then approached the Paisa Shotcaller and told him the Paisa had borrowed some soap, and now he was owed. You might think the Brother would be told to get lost… but no. Rules are rules. The Paisa was pulled aside and told to make an offering to the Brother, a bag of chips. Crucially, he was told not to make a big deal out of it. But he didn't listen to that part.

After giving the Brother the bag of chips, he complained to him. "Hey I didn't think I owed you, man. I was just asking for a favor."

The Brother informed the Shotcaller that the Paisa had made an issue out of handing over the chips. Again, you might think the Brother would be told to get lost, surely this is ratting in the least rat-tolerant place on Earth… but no. Rules are rules.

The Paisa was sentenced to a 2 on 1. I was told I was part of the twosome.

Another Homie and I were told to take the Paisa into a corner of the jail where the guards couldn't see, and we punched and kicked him for 2 minutes solid.

I had no choice. If I didn't do it, someone else would have, and then it would have been my turn against the wall.

The guy didn't fight back. Some do, he didn't. He stood there and took it for 120 seconds, which doesn't sound like a lot, but it is. We struck him in the chest, stomach, arms and legs, but not the face. That wasn't a rule, but people generally didn't, out of respect.

Although my court date was one week away, there was no way of knowing when it would actually happen. My fellow inmates laughed when I told them I'd be out in seven days, telling me it would be closer to two months by the time I would actually be taken before a judge.

My family tortured over whether or not to pay my bail. We do not have $10,000 to throw around. Surviving for a week in here was a very different prospect than surviving for two months. But there was simply no way of knowing. There's no manager to complain about the shitty system to.

In the end, I only did spend a week in there. But a week was enough.

The bizarre thing about jail is, it is full of people who are in there because they did not or could not obey the law… yet they seem to thrive in a place that runs on even stricter rules. They won't obey the rules outside, yet everyone without question falls in line with the self-enforced rules inside. And the rates of recidivism - I was the only first time offender in there, as far as I could tell - would suggest they are more at peace in jail than outside of it.

And it's not hard to see why some of them prefer it in there. The Homie Shotcaller, the one who was in charge of the whole jail, you probably will not have guessed, was a little person.

On the outside, he is an ex-con, a minority with a disability; On the inside, he is king.