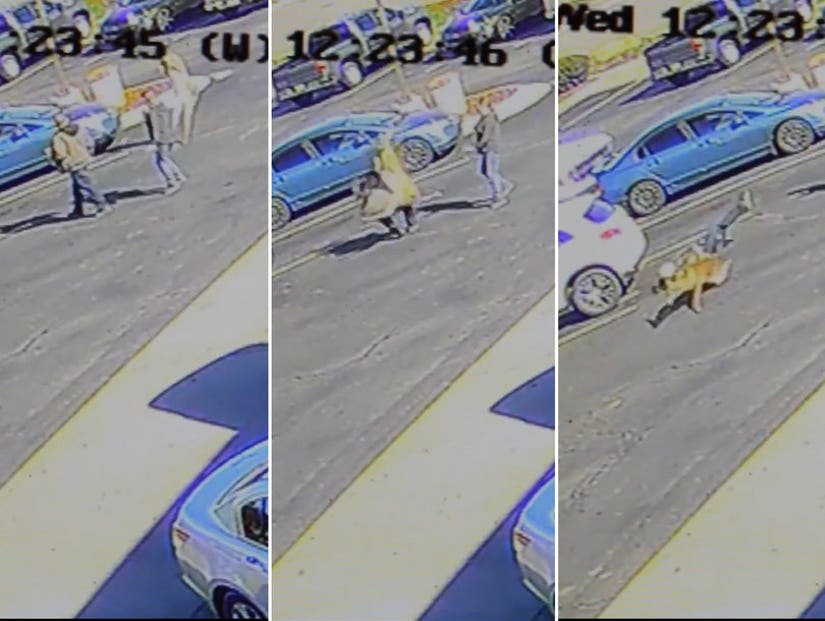 Breakaway Bambi had no time for the drive-thru.

A man in North Carolina was just trying to enjoy a refreshing soft drink when he was rudely interrupted by a stray deer.

Last week, surveillance cameras caught the moment the animal came out of nowhere and smashed into Ken Worthy in the middle of a McDonald's parking lot while he was returning to his car -- with Diet Coke in hand -- after a lunch date with his wife.

"It was absolutely nuts," Worthy told WSOC-TV in Charlotte. "It was just a bit of brown, and then I saw his face, I was down on the ground -- that quick."

Worthy, a retired detective, said he and his wife were looking out for automobiles, but didn't see the rapidly approaching deer.

"I mean, just see the flash of him rolling over me and in a straight line, and he was gone," he explained. "He collided with me. I was down and then back up."

In the quick clip, Worthy takes a tumble after the deer bowled him over, but quickly gets back up on his feet, appearing unharmed.

He posted the shocking video to his Facebook page with the caption, "Deanne Dee Morgan Worthy and I were walking out of the McDonald's in Locust NC with Coke's in hand. What happened next I would have never believed. Life is crazy sometimes. God is good ALL the time! Not injured."

And Worthy was thankful it was him that got some face time with the young buck, instead of other innocent bystanders.

"It wasn't my wife," he told the outlet. "It wasn't kids in the parking lot. It could have been worse. We're very blessed."

Miraculously, he managed to not spill his drink.

"There's important things in your life and Diet Coke is one of them," Worthy joked.