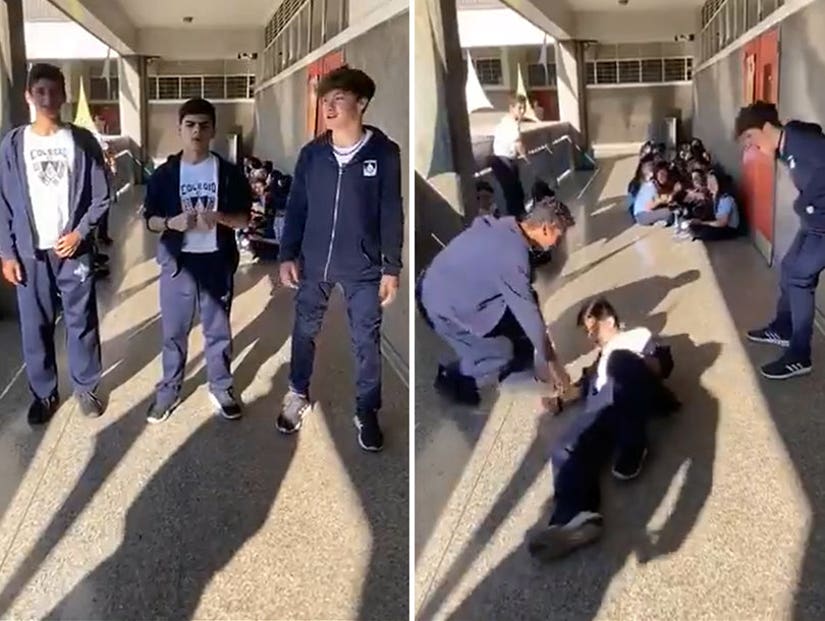 Doctors are warning the prank can be fatal.

A new viral trend on TikTok is so dangerous that doctors are warning participants it can be fatal.

"The skull breaker challenge is an emerging prank being propagated on social media that results in forceful trauma to the head and neck area," Dr. Nathan Richards of The Ohio State University Wexner Medical Center told Yahoo Lifestyle. "It can be associated with a variety of serious and even life-threatening injuries including, but not limited to, bruising, hematoma, skull fracture, neck strain, neck fracture, concussion and long term complications of concussion, bleeding in or around the brain, loss of consciousness, paralysis, and death."

A new trend called the “skull breaker challenge” is spreading on TikTok and causing serious injuries, even death pic.twitter.com/gAfnU8Nciz

The reckless act originated in Spain and has become popular around the world. At least two children in the United States have been hospitalized attempting the challenge causing parents to spread warnings across social media.

"I really contemplated posting this, but I feel there needs to be awareness of this malicious cruel viral prank," Valerie Hodson wrote on Facebook alongside a photo of her son bruised and bandaged in a hospital bed.

"He landed hard flat on his back and head, as he struggled to get up he lost consciousness, he fell forward landing on his face. The school monitor ran to his side, all the while the 2 boys were snickering and laughing as his stiff unconscious body lay on the asphalt, " she added.

A mom in Alabama, Teri Wimmer Smith, shared a similar post telling parents to "teach your kids that this crap is dangerous" after her son suffered two broken bones in his wrist.

The challenge is just as hazardous if the middle person is aware of the ending and prepared for it.

"In spite of knowing this is the intent, the falling teen rapidly lands without blocking the fall, leading to at minimum a concussion," Dr. Denise Klinkner of the Mayo Clinic Children's Center in Rochester, Minnesota told the news outlet. "If one is able, an outstretched hand to block the fall may lead to a broken wrist or arm."

#BreakingNews Doctors warn shocking new 'skull breaker challenge' on TikTok could be FATAL as more children are taken to hospital w/ serious injuries. 3 participants jump up, the 2 people on the side kick inwards to knock the person in the middle off their feet & onto their head. pic.twitter.com/VzszUHQ5SV

The "Skull Breaker Challenge" is only the latest in TikTok viral trends that have proven dangerous. The "Penny Challenge" involves slipping a coin behind a partially plugged-in phone charger to watch sparks fly, which is being branded a fire hazard. Another prank has a person pouring milk and cereal into the mouth of a willing participant lying on their back, who then attempts to eat the breakfast meal. The "Cereal Challenge" can cause severe choking.

TikTok has issued a statement condemning such acts.

"The safety and well-being of our users is a top priority at TikTok. As we make clear in our Community Guidelines, we do not allow content that encourages, promotes, or glorifies dangerous challenges that might lead to injury, and we remove reported behavior or activity that violates our guidelines."

TIKTOK CHALLENGE: Parents, here's the latest Internet craze, and it's leaving children in the hospital. https://t.co/4dMemdoBny

As to why these trends become so popular among children and teens despite their risks, the answer is as simple as social acceptance, according to Sabrina Sykes, PhD, a psychologist in the Department of Psychiatry and Behavioral Health at The Ohio State University Wexner Medical Center.

"New online challenges routinely spring up and rapidly spread over social media, particularly among adolescents and young adults," she wrote in her blog. "Social media, in turn, offers instant popularity among peers in the form of 'likes' and 'followers,' providing peer acceptance, buoying the teen's self-concept and, therefore, enhancing the draw to participate in these challenges."

Sykes, however, believes parents and adults can help deter these dangerous fads by constructive conversations with children and teens.

"Parents should familiarize themselves with social media platforms and engage their teen in conversations about online challenges," Sykes wrote. "Remember that while teens continue to grow and navigate social relationships, through these conversations parents can foster the development of thoughtful and rational thinking skills, while also maintaining connection."