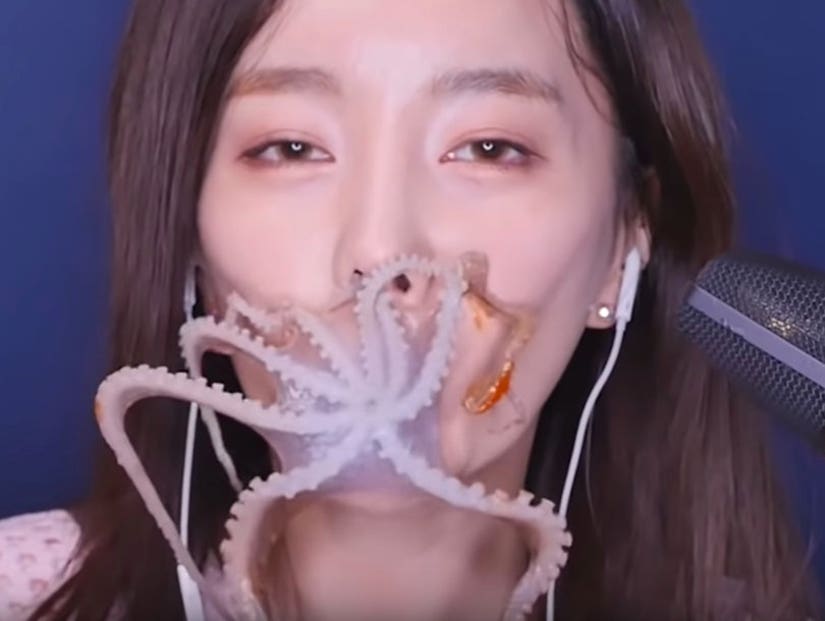 Brace yourself... this is stomach churning.

YouTubers have banded together to try and get one of their own kicked off the site.

Korean YouTuber "Ssoyoung" has sparked outrage as critics have said she has taken her viral "ASMR mukbang" videos too far, claiming she tortures and abuses animals before eating them alive on her channel, which boasts 3.4 million subscribers.

For the uninitiated, ASMR (Autonomous sensory meridian response) is a term used for a phenomenon that people say brings "immense pleasure from watching or listening to everyday habits like whispering, hair brushing, folding clothes," according to Today. Coupled with mukbang -- which means "eating broadcast" in South Korea -- the phrase translates into viewers having positive reactions to watching people binge-eat or consume uncommon delicacies.

In Ssoyoung's case, she mainly sticks to seafood as she rolls out trays of giant lobsters, squid, and eels -- all alive. Some can be seen flailing their tentacles everywhere before she either plunges a knife into them or whacks them, before devouring them.

One video entitled "Beautiful Girl in a Forest Full of Mysteries" has her dressed as Alive in Wonderland as she prances around the woods before finding an octopus hanging from a tree -- mystery for sure -- and promptly picks it up, toys with it and then shoves it in her mouth.

The magical land also holds a two-foot eel slithering on the ground, waiting for her muzzle as well.

In one particularly distressing video, she pours salt on a tank full of live eels and cackles maniacally as they thrash around in agony.

While she has been lambasted from naysayers calling it animal abuse for some time, YouTuber Ethan Klein has reignited the call for cancellation, as he slammed her in a recent post.

"I think she knows that if she wasn't acting at least a little squeamish and nervous about it, then she would be seen as a total sociopath," Klein said.. "But she clearly loves torturing animals. No question about it."

Check out his umbrage above and FULL DISCLOSURE -- some of the clips are stomach churning.