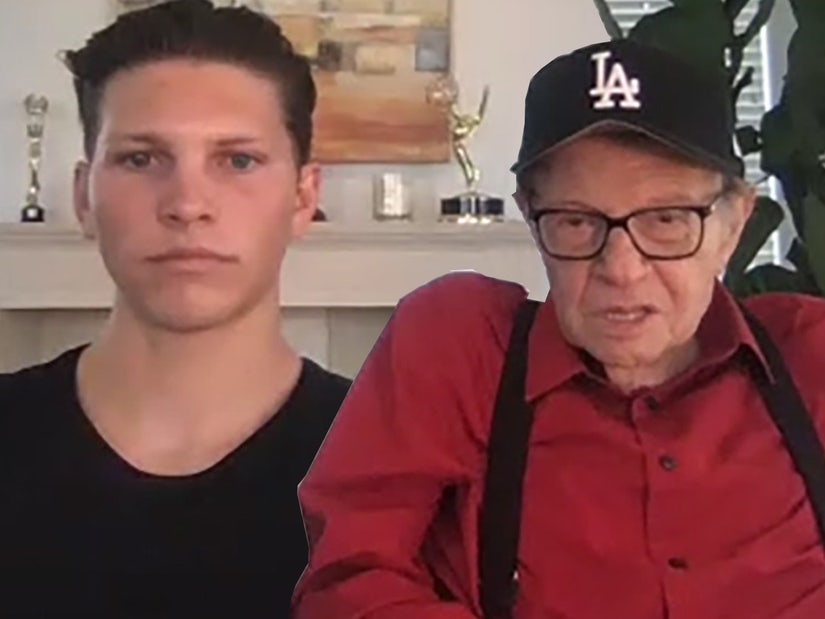 He's about to start his very first celebrity podcast -- and OJ Simpson could be his first guest.

Legendary broadcaster Larry King dropped by TooFab -- digitally -- to chat about "The Millionth Question", and many more things besides.

At 86 years young, and having survived a stroke last year, the octogenarian is not taking any chances when it comes to COVID-19.

"I can't do anything about my age," he quipped. "I love being out, I hate being in." 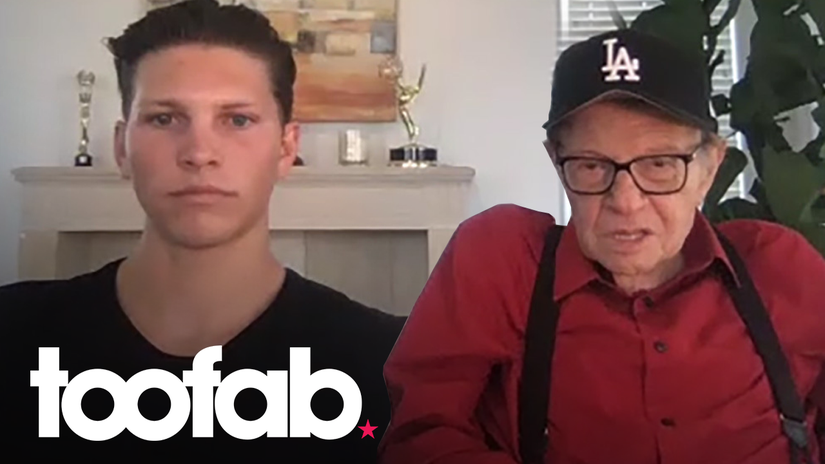 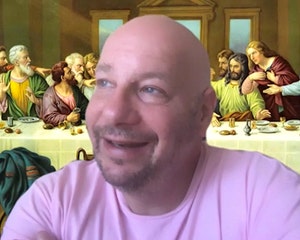 His 21-year-old son Chance, by his side, listed all the medical conditions his dad has fought off to date.

"He's almost had everything in the book, but he's a fighter," he smiled.

Chance, along with Vegas showman Jeff Beacher, are the executive producers behind "The Millionth Question", a dedicated celeb interview podcast that will encompass entertainment, sports, law, controversy.... anything, in fact, besides politics (because he does that in his other shows).

While the team are keeping the guest list close to their chests, Larry has his sights set on one in particular he wants to talk to: OJ Simpson.

"He's in the hall of fame, he's a Heisman Trophy winner, and he's a convicted killer," he said. "I knew him pretty well, he used to come on our old show... it would be so interesting to look back at his life since all of this... it's fascinating.

"What is OJ like? What happens when OJ goes out to dinner? Do people still haunt him? Has he really been able to start a new life? Does he have a girlfriend? How are his children? See, these are things that boggle my mind."

The biggest influencers, YouTubers are TikTokers are all on the radar for the show; as are rappers ("Rappers like me -- I have no idea why they like me because I have no idea what they are saying," he chuckled.)

But King is not interested in celebrities who are famous just for being famous (no names mentioned).

For a similar reason, he has no time for royalty, who just happened to be born with a "silver spoon in their mouth". That excludes Meghan Markle however, who is "terrific".

"I've interviewed her a few times, and she's really into politics. Now she deserves to be treated like royalty," he said. "And her husband was smart to get her out of England, and try to live a crazy-normal life."

While the show promises to avoid politics, Larry himself is fairly deeply embroiled. He's known both the President and his challenger for many years, and provided his honest opinion on both.

I know Joe Biden very well, he said. "You can criticize him politically, but personally they don't come any better."

Biden and King's name intersected in the news recently when it emerged that the mother of Tara Reade, the woman who has accused the Democratic presidential hopeful of sexual assault, called King's show in 1993 to claim her daughter had been assaulted by a then-unnamed senator.

King has no recollection of the quick phone call from 27 years ago -- but he does know this: he does not believe Tara Reade.

"That girl is looking shakier all the time," he said. "It doesn't look like it's going anywhere."

"It's very unfair. If you've got proof -- prove it. She has not proven it, in my opinion."

"I always doubted he was the subject of that," he said, "however we never know what's behind closed doors." 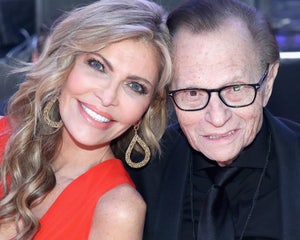 While Biden's opponent is certainly not shy about slinging mud, he has remained noticeably quiet on the Tara Reade issue... which does not come as a surprise to King.

"Because Donald -- and I know Donald for many years, spent a lot of time in his company -- is not going to complain if someone is accused of doing wrong things with women."

"Donald was a womanizer... if anyone doesn't know that they are crazy. You don't want to leave Donald alone with a single woman."

King thinks that if the election happened today, Biden would win. The thing that will defeat Trump, he thinks, is the pandemic.

"Donald is already calling it rigged," he said. "He doesn't want mail-in votes, which I don't understand; voting is a right that we all have. the postal service has a right to deliver my vote if I can't vote at the polls."

"I'm looking for an open, fair election; a major turn-out: the bigger the turn-out, the better it is for Biden. Usually if there's a major turnout, you're looking to throw out somebody. And Trump can get tiresome..."

"Personally Trump was always great to me -- I like him," he said. "I've always enjoyed his generosity. Yes, he likes women, but he's also got a lot of good qualities too."

Despite already questioning the validity of the election four months before it has even happened, King thinks Trump will respect the Constitution and step aside peacefully, should things not go his way. 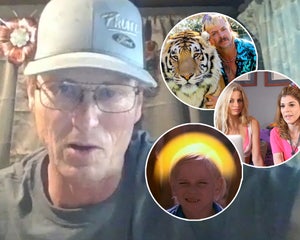 "What's he going to do if he loses, barricade himself in?" he chuckled. "No, none of that is true. He'll complain, but he will respect the Constitution I'm sure. And if he is not sworn in, he will be at the swearing in."

"However, some of his supporters..."

Does the President have a responsibility not to stir them up?

"I think he'll rise above it," King assured.

King also touched on his own love life, telling TooFab that after eight marriages (he only counts seven, because two of them were to the same wife) he has finally given up on settling down with that special someone.

"I'm not seeing anyone now, beside the four walls," he confirmed. "My romantic days... my get up and go got up and went. So that's over. And at 86 I don't intend to meet someone new."

"If you average 10 years with someone (which is exactly what King is averaging) you're doing pretty good," he smiled.

The reason he has finally given up on marriage, he said, is because it requires "subjugation" -- which he is no longer willing to do.

The formerly 400lb Beacher -- who has lost a further 40lbs while launching 4Forty4 while in quarantine -- also exec produces Jeff Ross's hugely popular InstaRoast IG Live show every Saturday and Sunday, and his Monday podcast.