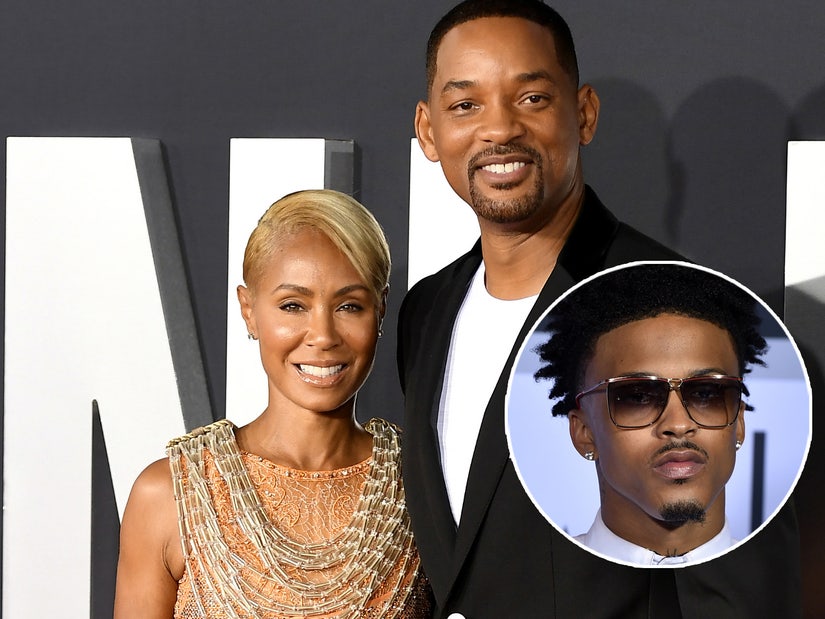 As August Alsina makes new claims about the couple, see what they've said about the same topic, in their own words.

Jada Pinkett Smith came out swinging against claims family friend and musician August Alsina gave this week, in which he said Will Smith gave him "his blessing" to pursue a relationship with his wife.

Alsina made the claim in an interview with The Breakfast Club's Angela Lee, describing how the situation allegedly escalated after he met the Smith family in 2015.

"I actually sat down with Will and had a conversation due to the transformation from their marriage to life partnership that they've spoken on several times," claimed Alsina. "He gave me his blessing."

"I totally gave myself to that relationship for years of my life, and I truly and really, really deeply love and have a ton of love for her," he added. "I devoted myself to it, I gave my full self to it — so much so to the point that I can die right now and be OK with knowing that I truly gave myself to somebody."

A rep for Jada, however, told Page Six the allegations were "Absolutely not true!"

Rumors about the Smiths having an open relationship have followed them for years, with Jada first addressing them in a 2013 interview with The Huffington Post.

"I've always told Will, 'You can do whatever you want as long as you can look at yourself in the mirror and be okay,'" she said at the time. "Because at the end of the day, Will is his own man. I'm here as his partner, but he is his own man. He has to decide who he wants to be and that's not for me to do for him. Or vice versa."

She reiterated that stance in 2015, when the topic came up again during an interview with Howard Stern.

"Here's the deal with that, Howard, you've got to trust who you're with. And at the end of the day, I'm not here to be anybody’s watcher," she said. "I'm not his watcher. He's a grown man. Here's what I trust — I trust that the man that Will is, is the man of integrity. So, he's got all the freedom in the world. As long as Will can look himself in the mirror and be okay, I’m good."

She also explained that she doesn't find it realistic to believe a man will never find another woman attractive.

"Just because your man is attracted to another woman, does not mean he doesn't love you. That's not what it means," she continued. "And it doesn't mean he's going to act on it. If your man can't really see another woman's beauty, how the hell is he going to see yours?"

She later clarified her comments on Facebook, writing, "Will and I BOTH can do WHATEVER we want, because we TRUST each other to do so. This does NOT mean we have an open relationship...this means we have a GROWN one."

Appearing on "Watch What Happens Live" in 2017, Jada also claimed the "craziest rumor" she had heard about herself and her husband was that they are "swingers." She added, "It's constant ... and I'm like, 'Yo, I wish. I wish!'"

Both Jada and Will denied the swinger talk again when they sat down for a joint episode of "Red Table Talk" in 2018. And while they distanced themselves from that rumor, they did also open up about how their marriage had evolved over time.

"Let's clear some rumors, just to have it on record," said Will. "We've never been Scientologists, we've never been swingers." Jada added, "that's a very specific lifestyle!"

That being said, the two have been through it during their time together, with the duo saying that, in order to move forward as a couple, they had to "destroy [their] marriage." According to Jada, she wasn't being true to herself in their marriage and had instead been living a life filled with "inauthenticity" where she took a backseat to her husband.

Will said divorce was "never even a consideration" for either of them. "I had been divorced before," he added, "I wasn't getting divorced again."

"We broke up within our marriage and got back together again and had to rebuild with new rules and something way completely different," he continued. "I took off for two years, I worked on myself, I read 50 books on marriage, relationships and behavioral psychology. I shut down for two entire years to see what was I doing wrong."

"Ultimately to have a successful relationship, you have to have a relationship with a human being," said Jada. Added Will, "Will Smith is a character, but deep down inside I was an insecure little boy who wanted Jada to say I was great and if she didn't say I was great, the dragon came out."

The two eventually decided to "throw away the concept of marriage," with Will saying they don't even call themselves married anymore. "It's a life partnership that we know is for this lifetime," said Jada.

"Whatever she needs, she can count on me for the rest of my life," explained Will. "There's nothing that could happen that we won't be together and love each other. And it's not because we're just saying it, it's because we've cracked each other's heads wide open."

Alsina was also a guest on Red Table Talk for an episode about addiction that same year, where Jada confirmed the two met following a performance of Willow and Jaden's in 2015. She said her whole family had been on a sobriety journey with Alsina, after he became addicted to Percocet.

"I was literally raining pills," he said after he first began taking the prescription drug to deal with the pain from an injury. As his addiction escalated, he said it was a phone call from Jada that finally turned him around.

"I was on tour and you called me and literally broke down about it," he explained. "To feel your emotion and hear you bawling, that was really a reality check for me. I was like, wow, if someone else can love you that much that it hurts them, why doesn't it bother you that you're hurting yourself? That moment really changed the trajectory of my life, just to start walking away from it."