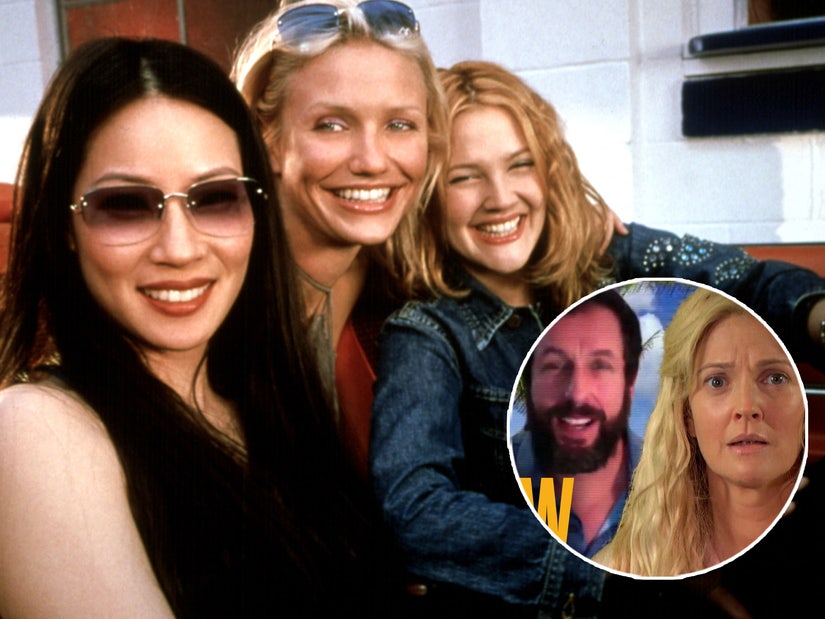 Barrymore really embarrassed herself trying to get Diaz on the show.

On Monday, "The Drew Barrymore Show" aired its first episode -- and the actress-turned-host enlisted the help of a few familiar faces to her launch. Not only did "Charlie's Angels" stars Lucy Liu and Cameron Diaz reunite for the premiere, but Adam Sandler also popped up as the two reprised their roles from "50 First Dates."

"I couldn't begin this journey without two women who have been a part of my heart for over 20 years," Barrymore said while introducing her first in-studio guests. "We are friends, we are fellow angels. Please welcome my partners in crime and life Lucy Liu and Cameron Diaz."

While all three of them appeared socially-distant in chairs separated six feet from each other, only one of Drew's costars was actually in the room with her. The trio later revealed that Diaz joined them virtually from Los Angeles, while Barrymore and Liu were in-studio together in NYC.

After the two sat down, Drew revealed why it was so embarrassing for her to get Diaz on the show.

"I sent Cameron a video and I'm saying, 'Hey, listen, I want to ask you something, will you come on the show?'" said Barrymore, explaining she sent her a video message while she was getting dressed.

"I'm so comfortable, I mean we have lived together all over the world ... you don't see anything, I'm not that dumb, but I'm getting out of the shower and I'm like wringing out of my towel and I don't hear back from her for like two days," Drew continued.

After texting her again and not getting a response for two days, she finally called her. "I'm like, 'What is going on? I'm worried. Is everything okay?' She's like, 'I don't know what you're talking about,'" she explained.

So, who got the clip? "Turns out a young boy got the video," said Drew. "Lucky him!" exclaimed Liu.

"By the way, it's like seven minutes long. It's like epic," said Diaz, who did finally get to see the clip in question. "This is some material, this kid's going to have this material for like honestly, this is going to last him three or four years."

Barrymore said she sent Liu a video as well, one of her crying as she invited Lucy on to the show. That, too, did not make it to the correct person.

"I am in my bathroom, I was fully clothed this time, I didn't take the risk and she didn’t get the video either," added Drew.

During their appearance, the three women celebrated their decades-long relationship, after starring in two "Charlie's Angels" films in 2000 and 2003.

"The thing that I love about our friendship is that we have been there in all the big and important moments," said Drew. "We've also been there in the small moments and the casual moments and the reason we are such good friends is because it's real and we go through real stuff with each other. It's not a Hollywood fairytale."

The women weren't her only former costars to make an appearance. Both she and Sandler got into character as Lucy and Henry from "50 First Dates" as well, to give fans an update on what they've been up to for the last 16 years.

The footage shows Lucy waking up to a video from Henry, catching the amnesiac up on what she's forgotten. Among the updates: they're married, have a daughter, we're all in the middle of a pandemic and Netflix is great.

Sandler, as Sandler, then sends a congratulatory message to Drew on her new gig -- while Ten Second Tom makes a quick cameo.

During the premiere, Barrymore also surprised one family of essential workers with a backyard oasis -- and another woman working at a children's home with a new car.