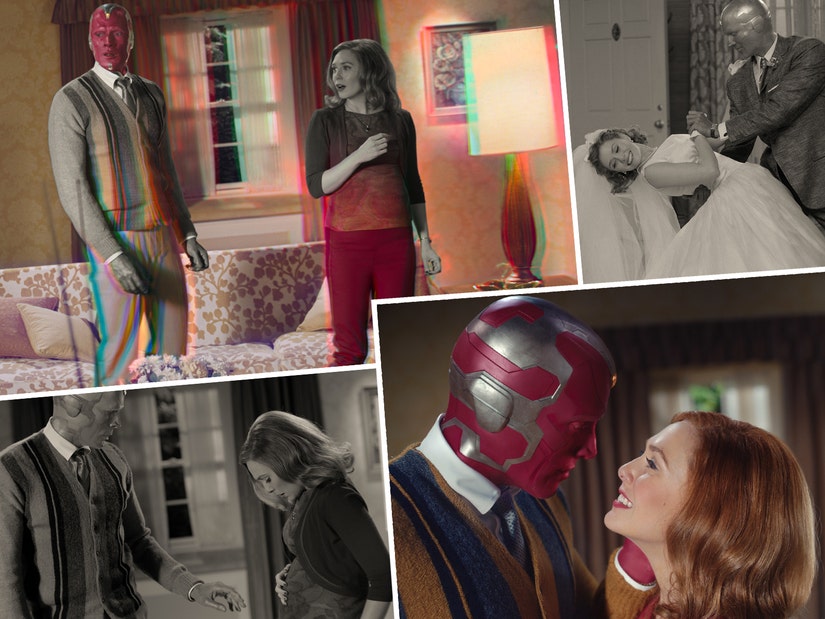 The MCU expands with its first show on Disney+ -- and ushers in a ton of questions with it.

"WandaVision" is unlike anything in the Marvel Cinematic Universe yet, taking two characters we all know and love and sticking them into an absurd setup filled with both laughs and mystery.

Starring Elizabeth Olsen and Paul Bettany as their Avengers alter egos Wanda "Scarlet Witch" Maximoff and Vision, the first episode took zero time diving up the bizarre setup -- throwing the two superheroes into the 4:3, black and white world of '50s sitcoms, studio audience and all.

The faux show even had its own opening credits, with a theme song explaining the two were just "a regular husband and wife who left the big city to find the quiet life" --  before calling her a "magical woman in a small town locale" and him "part machine."

Me after watched the first 2 episode of wanda vision :#WandaVision pic.twitter.com/sLONi5XVEF

The plot for the first two episodes was pretty straight-forward, as the two found themselves in the middle of some classic sitcom tropes, while trying to hide their super-identities from the world around them.

In the first half-hour, Vision had to impress his boss with a dinner at their home -- a dinner Wanda was not prepared for, as she thought they were having a romantic night for two. The second episode dealt with the town's talent show fundraiser, in which the two performed as magicians Glamour and Illusion, a nod to two other characters from Marvel comics. Hilarity ensued when Vision jammed up his internal gears with gum, something which made him act drunk.

Of course, this is a Marvel show, and there's a much bigger mystery at play here than the sitcom aesthetics suggest. The first sign something is off here: neither Wanda or Vision could remember anything about their pasts. They had no idea where they met or how long they had been together, the two also didn't wear wedding rings and Vision had no grasp of what his job actually entailed.

While entertaining the boss and his wife, their cluelessness continued as Mr. Hart kept grilling them about their history to an alarming degree. When Mr. Hart began choking on his food, something was clearly amiss when his wife bizarrely reacted by eerily repeating, "Stop it, stop it, stop it!" Vision, frozen in his seat, only saved the day after Wanda told him to.

Sword: “Wanda can you hear us? Wanda do you read-“

the artist the fear pic.twitter.com/QqUHejOY6V

In the second episode, the odd occurrences kept happening. During a planning committee meeting for the talent show, Wanda and Dottie heard someone on the radio asking, "Wanda, can you read me, over? Who's doing this to you?" Dottie reacted in a very off manner by clenching her fist around a glass, before breaking it and bleeding red.

Then there's the red and yellow toy helicopter the very black and white Wanda found in their bushes. On the side of the copter was an insignia comic fans may recognize as belonging to S.W.O.R.D. While the acronym originally stood for "Sentient World Observation and Response Department" in the comics and was a sister organization to S.H.I.E.L.D. focusing on alien threats, here it stands for "Sentient Weapon Observation Response Division."

Many believe S.W.O.R.D. was first referenced in the MCU at the end of "Spider-Man: Far From Home," as Nick Fury was seen aboard a giant ship in space. The organization was referenced multiple times in the first episodes, with its logo appearing twice more.

When the first faux episode ended, the screen expanded to 16:9 and changed to color, before showing a mystery person watching the series on an old TV. The insignia appeared on the computer screen next to the television. Who's watching? No idea, but our money is on Darcy Lewis (Kat Dennings) from the "Thor" films.

The logo also appeared at the end of the second episode, as Wanda and Vision ran outside to investigate a strange noise. There, they saw a man in a beekeeper suit exiting the sewer, with the symbol on his back. Wanda, however, then demonstrated she could somehow control the situation with her mind -- exclaiming, "No!" before rewinding their show and changing the ending.

The episode ended with suddenly pregnant Wanda asking, "Is this really happening?" as Vision told her, "Yes, my love, it's really happening." Everything then turned to color, just in time for the '70s to hit next week.

#WandaVision spoilers
-
-
-
-
-
the way #wanda said “No” and it rewinded HER POWER!!! AHHHH pic.twitter.com/xzX5fOedQY

Of course, we don't really think any of this is really happening. At this point, it feels like Wanda might be in a S.W.O.R.D. facility, possibly in a catatonic or fugue state. Are we getting a look at her subconscious as she works through her grief following the events of "Endgame" and the death of Vision? Is S.W.O.R.D. simply doing tests on her? Or is something more sinister at hand?

Thanks to the radio message, it sure seems like someone on the outside might be trying to help her, but who? And where does Teyonah Parris' character fit in? When she was cast in the series, it was announced she'd be playing Monica Rambeau, the adult version of the character first introduced as an '80s kid in "Captain Marvel." So far, however, she's going by Geraldine -- is she part of a bigger ruse?

Lastly, we need to address those commercials.

In the first episode, there was a spot for the "new and improved ToastMate 2000" toaster. While a black and white commercial, the mini-oven had a blinking red light on it. It was also created by Stark Industries. The second spot was for a Strucker watch. Strucker, of course, is a reference to HYDRA operative Baron Wolfgang von Strucker -- the man who used Loki's scepter to give Wanda and her twin brother their powers in "Age of Ultron." Both commercials also had ticking noises in the background, reminiscent of the sound from metronomes used for hypnosis.

What does it all mean?!? We're not sure yet, but we can't wait to find out when new episodes of "WandaVision" drop Fridays on Disney+.

#WandaVision spoilers
.
.
.
.
.
.
Are these Wanda's parents? The Stark Industries "toaster" has a blinking red light beeping like it's about to go off... Wanda was trapped with the Stark bomb that killed her parents for 2 days. The same people show up in the HYDRA commercial too. pic.twitter.com/P42DszD1Yi

The commercials on #WandaVision are from Wanda's memories.

Stark Industries- the bomb that killed her parents

I'm so sad to see Wanda denying the truth to be happy, she just wanted to be with him one more time #WandaVision pic.twitter.com/ycsH5ySifb