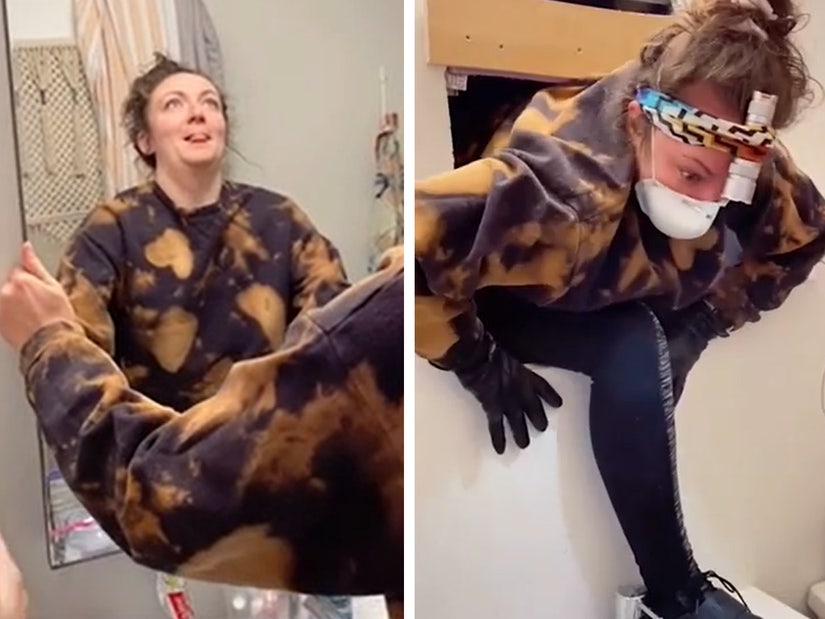 Yes, she went through the mirror to the other side -- and found "signs of life."

"Candyman" started trending on Twitter Thursday morning after a series of TikTok videos showing a young woman investigating a secret room behind her mirror went viral.

Samantha Hartsoe shared four different TikToks on Wednesday, starting with her trying to find the source of cold air pouring into her New York City apartment.

Once she realized it was coming from her bathroom, she investigated further and noticed the mirror was moveable.

"Let me show you what I found in my New York City bathroom," she ended the first clip.

Part 2 picks up with Hartsoe pulling the mirror itself off the wall, at first thinking there was simply an electrical box or something behind it. She soon realized there wasn't just a full on room, but a room with a hallway leading elsewhere.

"What if someone's living there right now?" asked a friend, adding some more nightmare fuel to the situation. He then brought up the movie "Parasite," in which -- SPOILER ALERT -- the husband of a wealthy family's housekeeper was discovered hiding from loan sharks in a secret bunker under the home.

While he mentioned "Parasite," "Candyman" also started trending, as protagonist Helen (Virginia Madsen) finds a similar discovery while investigating the urban legend (Tony Todd) around the titular character. Inside, she finds a room filled with offerings for the man himself. Saying his name into a mirror, of course, is also a way to bring him forth -- but, unless you want a hook in your gut, we wouldn't recommend it.

"The weirdest part about this is they didn't fill it in on either side of this hole," says Hartsoe. "I need more answers. I have to go in and figure out what is on the other side of my bathroom. What if someone's living in there?"

Though one of her friends told her they really didn't think she should venture through the hole, Hartsoe did just that.

She grabbed a Covid mask, strapped a flashlight to her head and grabbed a hammer for protection, before squeezing through the hole to the room.

"You're in the other side of the dimension,"  her friend ominously said as she filmed from the adjacent space.

The final video shows Samantha exploring the room, before venturing into the larger, two-story apartment. While walking around she saw a lot of trash bags strewn about, before finding "signs of life" -- a water bottle.

It's clear that the space was either in the process of or was recently being renovated. She also discovered that the door leading into the apartment from the outside hallway was unlocked, meaning anyone could have, in theory, gone in and then entered her apartment from the other side.

"Ok great great, gonna go ahead and lock this door," she said at the end of the footage. "My landlord's getting a really fun phone call tomorrow."

She also joked that she would also be "cementing this mirror down."