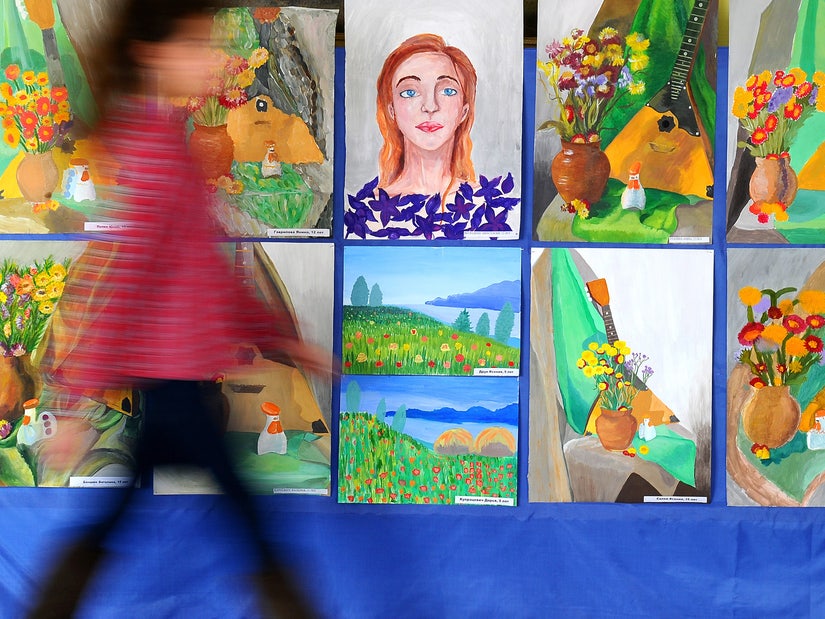 Kiss frontman Paul Stanley even shouted out support for the budding Picasso.

A 6-year-old student's art piece went viral after an art teacher reportedly did not approve of it.

On Wednesday, Gemma Leighton took to her Twitter to reveal her daughter Edie was upset after she unveiled her soon-to-be masterpiece to her extracurricular group.

My 6 year old daughter painted this amazing scene at an after school art club.

Her art teacher told her she had done it wrong?!

You can't do art wrong!

She was so upset as art is her favourite thing to do.
Can you please show Edie some support and like her painting? pic.twitter.com/LV8rOgPwjc

"My 6-year-old daughter painted this amazing scene at an after-school art club," Gemma posted. "Her art teacher told her she had done it wrong?! You can't do art wrong! She was so upset as art is her favourite thing to do. Can you please show Edie some support and like her painting?"

And the social media masses did just that, with the painting of trees, sky and a walkway collecting over 100,000 likes and 6,000 retweets as of the writing of this article.

One fan replied, "Edie, that is a beautiful picture There's no such thing as wrong in art. Keep painting and drawing and get your mum to put the best ones on the wall like an exhibition."

Another shared, "I'm a professional artist and I love Edie's painting. Very expressive! If her teacher knew anything about art he or she would have noticed that Edie included perspective in the painting, something most 6 year olds haven't learned yet."

"Honestly, I am absolutely blown away from all the amazing positive comments about Edie's painting," Gemma responded. "I wasn't expecting such a response! Thank you to all of you who have liked and left comments. You have made one little 6-year-old very happy indeed."

The outpouring caused Gemma to create a separate Twitter account to showcase Edie's prized paintings and other children's artworks.

I have created a page for Edie's art as a space for all children to upload their magnificent creations!
This was suggested to me in the comments yesterday and we loved the idea!
Give it a follow @EdiesArt

Oh Edie knows who KISS are 🤘 massive thanks to Paul Stanley.. I received the tweet this morning and it blew my mind 🤯

"Edie would like to thank everyone for the kind and encouraging support," Gemma added. "She feels much more confident than she did this morning and will continue with her art."

While Edie was basking in the glory of her newfound popularity -- Gemma said she ran into school "declaring that she was now a famous artist" -- another "old master" took notice of her abilities.

"Edie... Your art is AWESOME!!!" tweeted Kiss frontman Paul Stanley. "There is no such thing as doing art 'wrong.' There are only teachers who are wrong'!!! Your art shows amazing freedom and spirit. How can that be 'wrong'?!?! Keep doing EXACTLY what you are doing. I LOVE it!!!"

As for any doubt of the talented tyke understanding Stanley's pedigree, Gemma tweeted, "Edie knows who KISS are, massive thanks to Paul Stanley. I received the tweet this morning and it blew my mind."

Gemma, show Edie this picture by the French artist, Raoul Dufy, and please tell her that her painting reminded me of his pictures. I would get Edie's picture made into a card or canvas print, or both, on Snapfish, and hang it in the house. pic.twitter.com/qeEH6X8StW

Shawn, since believe it's "vital" not to "super praise" everything others do, let me just offer that I found your chosen way of responding to Gem's request to be inappropriate, patronizing, and reminiscent of a paper bag full of old farts. How's that? Am I doing it right?

I’d buy it from her! I LOVE it! How much? You tell her I want to start a bidding war. Minimum bid?

I read your post and immediately thought of a song by Harry Chapin - Flowers are Red. The song always broke my heart: https://t.co/TWIsKER5TP:

Edie, I will never forget coloring a horse blue when I was about your age and being told it was wrong. I believed it. I shouldn’t have. Why can’t you draw a blue horse? Don’t let anyone tell you how to do art. Math is right or wrong. Art never is.