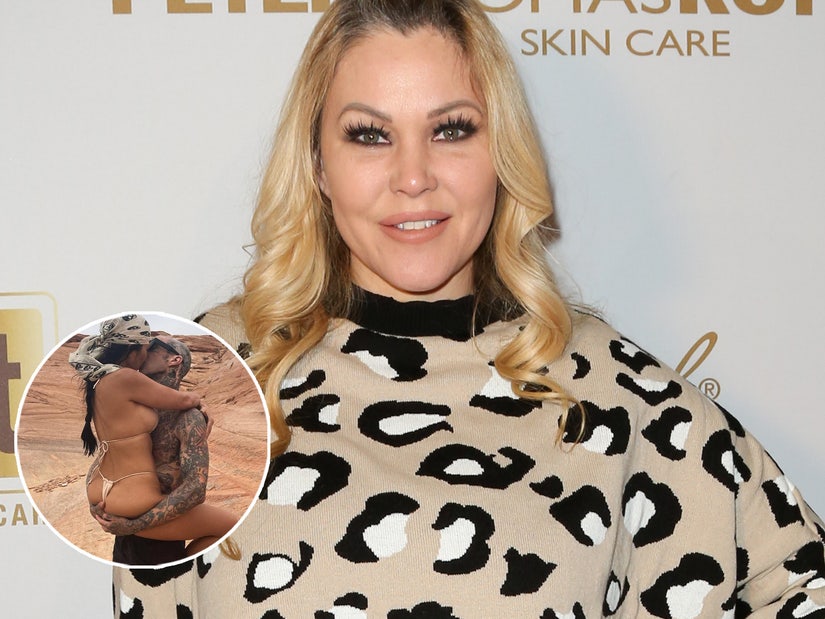 Some of Barker's behavior is giving her deja vu.

While Shanna Moakler says she has no "ill will" toward Kourtney Kardashian -- the current girlfriend of her ex-husband Travis Barker -- their social media antics are still striking her as just a bit odd.

In a new interview with PEOPLE, Moakler was, of course, asked about her ex's new relationship -- fair game as she has made quite a few public, shady comments about their romance so far.

"I'm very much over my ex. It's been a long time. However, do I think some of the PDA that he's doing with her is weird? [Yes]," she told the publication, before revealing why some of the behavior is giving her a serious case of deja vu.

"The movie, 'True Romance,' that I feel like they've been bonding over was the theme of our wedding. Our daughter's named after the character in the movie," she continued. "Flying banners overhead like we did on 'Meet the Barkers.' Stuff like that ... I just think it's weird."

For Kourtney's 42nd birthday, Barker got an airplane to fly over the beach they were at with a celebratory message. He also revealed he got a "You're So Cool" tattoo, a reference to "True Romance," many believed was written in Kardashian's handwriting.

Moakler said the couple's kids -- Alabama and Landon Barker and Atiana De La Hoya, Shanna's daughter with Oscar De La Hoya who Barker helped raise -- all "seem to really like" Kourtney and the Kardashians, which she said is "key." What she isn't a fan of, however, is some of the online attention that comes from Kourtney's followers.

"It's really almost to the point of being bullied," she said, saying that the only reason she's been posting any shady comments herself -- comments she said were just light-hearted jokes -- is to rile Kourtney's fans up even more.

"It was more to annoy her fan base because at some point you have to make a joke out of it," she added.

Barker and Kardashian have been seeing each other since January, before really going public with their relationship around Valentine's Day. Shortly after they made it Instagram official, Shanna reportedly liked a comment saying, "Shhhhiiiii that broad don't got nothin' on you. Travis downgraded big time."

The next day, however, she told TMZ that Barker was her "friend" and she wanted him "to be happy." She added, "If being with her makes him happy, and she's happy, I'm happy for both of them, honestly. I think they make a cute couple."

Of the shady like, she added, "I didn't even remember what the comment was, it was clearly in jest."

Though that seemed like a good place to put a pin in the perceived feud, Kourtney revived the talk of exes by sharing a link to a Poosh blog post titled, "How to Break the Habit of Stalking Your Ex on Social Media," which some read as a dig toward Moakler. Just a couple hours after that, Moakler also addressed exes again by joking on her IG, "Stop complaining about your life. There are people out there dating your ex."

Shanna and Travis were married in 2004 and separated two years later. Although they tried to rekindle their relationship after Travis was in a tragic plane crash that left four dead in 2008, the pair decided to go their own way. She's currently dating Matthew Rondeau.