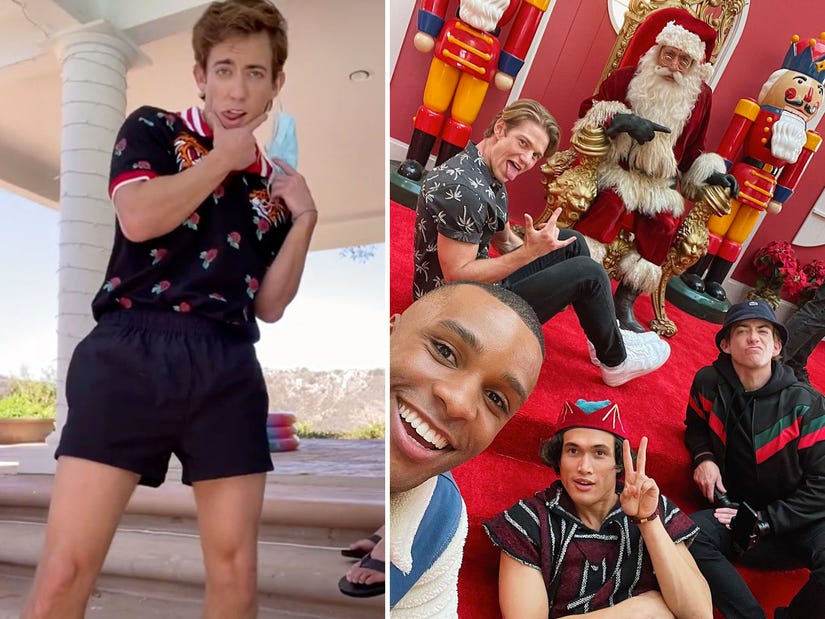 McHale reveals what was cut from his AHS episode, reflects on Glee's TikTok popularity and storylines that don't hold up now and shares why the cast has maintained such a close bond.

Six years after the series finale, "Glee" alum Kevin McHale returned to the Ryan Murphy-verse this week for an appearance on "American Horror Stories."

On this week's episode, titled "The Naughty List," McHale starred as Barry, one of four TikTok influencers living in the so-called "BroHouse." Clearly inspired by the now-defunct Sway House and social media controversies like Logan Paul's "Suicide Forest" video, the guys were seen going to extreme lengths to keep their follower count up.

After filming a man's suicide and posting it to their page, they tried to gain back their fleeing followers by acting a fool at the mall -- and telling children that Santa isn't real in front of the shopping plaza's St. Nick (Danny Trejo). Unbeknownst to them, this man was an imposter -- and really a homicidal maniac who got his kicks killing off Kris Kringles, before taking their place. It didn't take long for the guys to learn what happens to naughty boys as the body count started rising.

TooFab caught up with McHale after the episode dropped, where he opened up about returning to the world of Ryan Murphy post-"Glee," his relationship with social media, the scene we didn't get to see, his thoughts on Glee's TikTok popularity and why he believes the cast of the show is still so tight all these years later.

This marks your return to the Ryan Murphy-verse six years after the end of Glee. Did you try to get on AHS or any of Ryan’s other shows in the past? Maybe float your name out there at all before this?

Not really. The only show I ever called him just to even talk about was Pose, before the first season. I had gotten my hands on the OG script, the one [co-creator Steven Canals] originally wrote before Ryan and Brad got involved. It was all "Paris Is Burning," and I was all, "I'm so happy you're doing this" and that was basically it. Obviously, that show turned out to be ... I have so many Black friends in New York who are part of the LGBT community and that show meant so much to them in so many ways, they felt it was the only show they could be cast on. I was just happy he was making that show.

I was like, this show is definitely not for someone like me. Don't create something to take away from somebody else who actually deserves it and try to fit me in. That show was just so good. I hadn't called him about anything, I feel uncomfortable doing that and for this, he just randomly called me up, which felt a lot better.

You said you visited the Murder House set when the first season of American Horror Story was in production while you were on Glee. What was that initial visit like and are you surprised to see how massive the franchise has become?

We absolutely didn't realize the magnitude of what Horror Story was going to become and what was actually going on because we were so wrapped up in our "Glee" world. We had a screening room on Paramount where we shot "Glee" and where we would watch the "Glee" episodes and then for one of the lunch breaks, he showed us "Horror Story" and I was absolutely terrified. We heard about it and they were filming one stage over from us and when we got the opportunity, when we had time between scenes, we made him take us over there. It's like, "I need to see everything. Show me everything. I need to see the rubber suit, where's the kitchen, where's the basement?" So I could see the sets, hoping it would make it easier to watch. It really didn't.

There's something about, when that show first came on and you're watching it at night time and it's dark, it didn't matter that I had walked through those sets. It didn't have the effect I thought it would.

This episode obviously is a commentary on influencer culture as a whole and also points out that some TikTokers who have done terrible things have still had success with fans since. Did being on this show change the way you look at that influencer and TikTok culture?

Unfortunately, or fortunately, I'm already pretty into social media. I spend too much time on there. So I already had a pretty good grasp. I hadn't really delved into the world of this particular style of TikToker really, beyond scrolling past some of their dance videos. So watching some of the YouTubes I didn't know existed or all these videos together or reading about some of the drama and finding out about some of the behind the scenes business stuff about them, that was all very new and sort of mind blowing for all the reasons you might think.

A couple years ago it was Instagram, a couple years before that it was Twitter and before that it was YouTube, so people have always been finding a way to capitalize off of whatever that social media platform calls for. You have the Logan Pauls of the world who have sort of moved beyond that to the equivalent of like a shock jock, the Donald Trump of social media, where they just say things to get a rise out of people.

I've done a pretty good job of avoiding that. I'm friends with people like Tyler Oakley, he's really someone who uses social media platforms to do really great things and that whole crew. It's nice to see the evolution because I feel like they're the godparents of influencer stuff, they were the first ones to get in there and how does this look a decade on? Right now, with this style we were mimicking, it was definitely eye-opening, even for someone like me who is on it a lot.

The running joke throughout this is that influencers are basically dead after they turn 30. As someone who came up on a teen series, is that a reality you ever worried about as an actor? Like, what is next, what does the next chapter look like after this?

I never have for acting, because I'm a white male. I probably have the easiest road. I know female friends of mine who literally overnight went from auditioning for teen parts to auditioning to play moms. And we're the same age and we look the same age. I guess my little weird thing is I fall into the no-mans land in terms of how I look. I don't necessarily look my age, I look younger. It's a weird thing. I've never worried about it, I've never cared, it is what it is. For music stuff, I did worry more. But once I put out my EP a couple years ago, I got that out of my system. Like, okay, whatever happens happens.

You can't control those things. If the part is right and somebody sees you for it, it is what it is.

I read you actually filmed Barry’s death and saw that photo of you on Instagram all lit up for that scene. What exactly did that entail?

It was a couple sections. The person actually covered in real flames, that was the stunt double. Ryan is very cautious about not ... like, people wanted jumps into the pool and flips into the pool but wouldn't let us do anything out of an abundance of caution because he probably learned from us "Glee" folk that people are prone to injury. For my thing, I used that light up suit, but they didn't even use that shot. Technically, they were supposed to mimic flames and I was going to crash through a window, but it didn't make the final cut.

You're on TikTok too and your account is a good mix of stuff highlighting your personal life, some of the dance challenges and the occasional Glee content. Are you surprised there's still such a big audience for Glee on TikTok? It's like it has a whole new life there.

Yeah, I'm completely mystified about it. We all are. We've all talked about it because during the pandemic there was sort of this resurgence on Netflix of people watching "Glee" and then, there was nothing else to do, so I got more involved on TikTok and saw a couple TikToks like, "That's weird, why do these have millions of views?"

And then some fans would be like, "Do you know about GleeTok?" And that's just the beauty of the algorithm on TikTok, where you and I would have -- and probably do have -- completely different experiences on there, just because the algorithm can be so, so specific and I'm not going on there to look for "Glee" things, so I wasn't seeing any of the "Glee" stuff. People would send me things on Twitter and it was shocking. I don't know why, I'm not sure how it happened, but it's funny and I'm all for but and it's fun too, because obviously as time goes on, some things don't age as well and it's funny to see teenagers now calling out and making fun of some of the things we did.

You got away with a lot at the time!

You mentioned the podcast, I know you recently celebrated Jenna's bachelorette party, there was the gym run-in with Chord Overstreet. What keeps this Glee crew so close, because we all know that's not always the case on other shows?

I'm not entirely sure. We were all very, very close anyway. We just were. We all got along and I think when you go through an explosive rise, this weird phenomenon where we're going on tours around the world, mall tours, where it's not normal and it was all our first gigs and I think we just leaned on each other.

Also, I think going through those high highs, we've also gone through collective low lows. And all of those things, the good and the bad, strengthen those bonds with each other and, if anything, we've just gotten closer over the years.

As time goes on, people have kids and get married and we lose some people and we see what really matters. The relationships that we have with each other are so specific and we're able to share such a specific experience and nostalgia of a time in our lives, we can't have that with anyone else, even significant others. It's nice that we do keep coming back and Michael Hitchcock, who was one of the writers, we all got together a couple weeks ago. He's working on a billion shows, he's like the male Jane Lynch, he's been in everything and he was reminding us, it's not normal that we all as a group -- not just cast, but cast and crew -- get together so often and are so close. I think it's probably having gone through the battles that we've all gone through together that keep us close.

"American Horror Stories: The Naughty List" is available now on FX on Hulu.