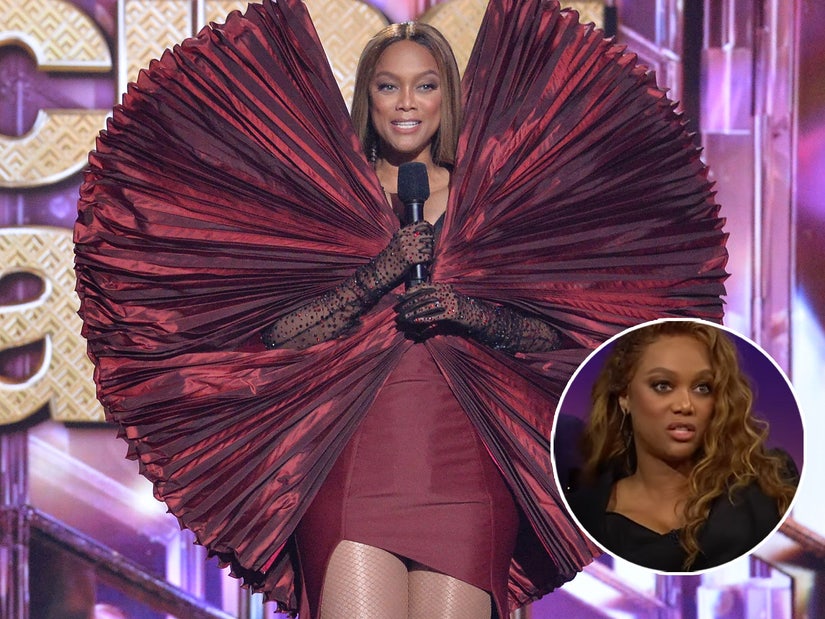 "Nobody's going to say anything about a pretty dress."

Tyra Banks is sharing her thoughts after she went viral for her unconventional look on Monday's episode of "Dancing with the Stars."

During the show, the "DWTS" host rocked a dark red gown -- pictured above -- designed by Julian Mendez Couture that featured massive, fan-like sleeves, which were so large they reached above her head and went down to her thighs. The supermodel's look went viral on social media, with people comparing it to farfalle pasta, folding hand fans, and even a Covid cell.

However, the most popular comparison that fans made on Twitter was to "Jurassic Park," as many users said Tyra's dress made her look like a dilophosaurus.

"Sorry, but Tyra looks like a Dilophosaurus that is mad soaked in red wine in this dress. Luv you anyway though Tyra. #dancingwiththestars #dwts," another user added.

While appearing on Wednesday's episode of "The Late Late Show with James Corden," Tyra, 47, reacted to causing a social media frenzy over the look and weighed in on the "Jurassic Park" comparisons in particular.

"People were commenting online that you had taken inspiration from 'Jurassic Park,'" Corden said, showing a photo of Tyra's dress alongside a shot of a dilophosaurus from the classic film.

"It is kind of uncanny," he joked. "Was this part of the thought process?"

"You know what's so funny is I kept saying peacock after and my stylist kept on kind of giggling and stuff," Tyra recalled. "And then, so we started seeing all of 'Jurassic Park' stuff. So then I posted on my social 'Tyrannosaurus Rex.' ... Actually, it was 'Tyrassic Park.'"

"They both work," Corden pointed out, to which Tyra agreed.

The former "America's Next Top Model" judge went on to add that her stylist confessed that they knew she "looked like a lizard" before the dress went viral. However, Tyra said she didn't really mind. In fact, she explained why taking fashion risks and being "different" should be celebrated.

"I don't really care, child," Tyra told Corden. "Different is what? Better. We ain't got time to be, like, pretty and in a normal dress, because nobody's going to say anything about a pretty dress. You know, you got to, like, push and go for it."