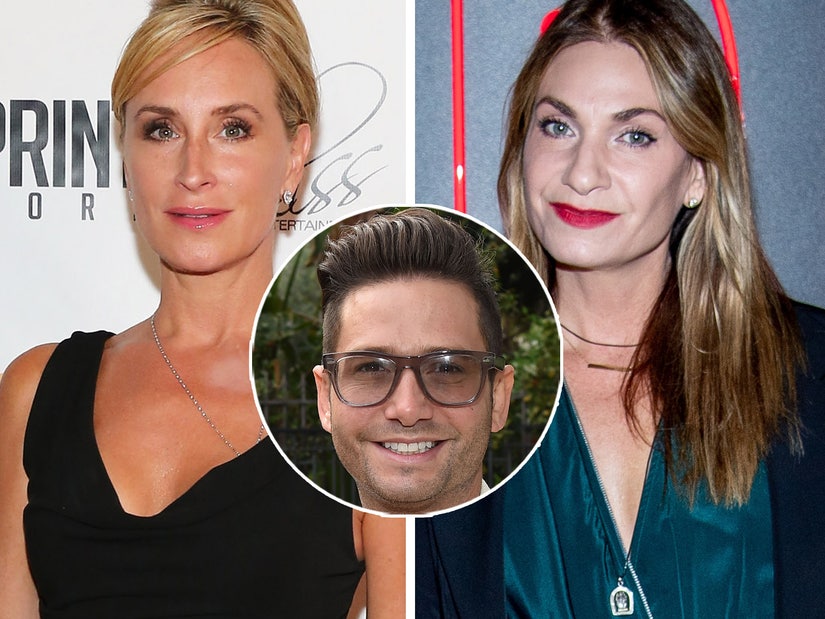 Although Josh Flagg spoke about the time he "stuck a cigarette" in Sonja Morgan's vagina in a resurfaced vlog, he now says he was just joking at the time.

Speaking to comedian Heather McDonald via Facetime for her podcast "Juicy Scoop," the "Million Dollar Listing Los Angeles" star was asked about the resurfaced video and Heather Thomson's claim that Sonja had allowed men to put lit cigarettes into her genitals. Josh denied Heather's allegation -- as Sonja had previously done herself -- calling it "ridiculous."

"Heather [Thomson] is full of s---. Sonja and I have been best friends for literally 15 years," Josh said. "The s--- we say sometimes on my Instagram ... It's just fun. We just have, like, a good time. There's nothing real about it."

"Do you really think I stuck a f--king lit cigarette in her vagina?" he added. "I mean, like, if you dig far enough you'll see also a part where I said that I put a Rolex in there and it didn't come out. But come on. This is ridiculous."

The Bravo star went on to claim that Heather "totally jacked" the video from his social media.

"I know Sonja, she's insane, but she's not going to put a cigarette in her vagina," Josh explained, jokingly adding that "she only puts jewelry in there."

The real estate agent pointed out that Sonja would have "happ[ily]" owned up to it if the claim "was true," noting that the "RHONY" star has "no shame." He also said he's "seen Sonja do a lot weirder s--- than put a cigarette in her vagina."

"She will tell you, in one second, almost too much information," Josh said. "So if she's denying something, that's always not true."

Sonja Morgan may have called her former "RHONY" co-star Heather Thomson a "liar" over her claim that she let "guys put lit cigarettes in her vagina," but it looks like could be some truth to Heather's claim after all, according to a new resurfaced video.

Back in March 2019, "Million Dollar Listing Los Angeles" star Josh Flagg shared a vlog to his YouTube channel in which he documented a trip to New York City. At one point in the video, Josh, 36, can be seen hanging out with Sonja, with Josh bringing up the time that he "stuck a cigarette up [Sonja's] vagina" after a night out.

"Remember that one time after Townhouse [Bar]? I stuck a Parliament [cigarette] up her vagina once," Josh said in the clip.

"Oh, God. ... We woke up the next day, there were so many cigarettes lying around," Sonja added, to which Josh replied, "It was all over. I mean literally I stuck a cigarette up her vagina."

Sonja then jokingly added that it was "just for fun."

Watch the moment go down in the clip, above.

TooFab has reached out to Sonja Morgan for comment.

Heather made the allegation in the new Housewives tell-all "Not All Diamonds and Rosé" by Dave Quinn.

On Thursday, Sonja, 57, responded to Heather's remarks, commenting on a post shared by the Bravo Instagram fan account @facesbybravo. The account had posted a screenshot from a Page Six story that featured Heather's quote..

In another comment, the Bravo star claimed Heather's husband, Jonathan Schindler, "wanted a 3 some."

"This book is really stirring the pot 😂." Sonja went to share in a third comment. So far, Heather hasn't responded to any of Morgan's comments.

"Not All Diamonds and Rosé: The Inside Story of The Real Housewives From the People Who Lived It" paints an extremely thorough picture of every single franchise of the series, with first-hand accounts from most of the housewives themselves, Andy Cohen, producers, network executives, casting directors and more.

In the "RHONY" chapter in the book, titled, "Bite of the Apple," Sonja and Heather both -- separately -- discussed the time Sonja wouldn't let Heather and Kristen Taekman in her town house and had them stay in the lobby while they waited for a party bus to arrive to take them to Atlantic City. However, Sonja was upstairs at the time. As fans can recall, this was documented during an episode in Season 7 back in 2015.

"I was upstairs, and my sister called me to tell me someone we knew had died," Sonja recalled. "She was supposed to come take care of my daughter [Quincy], but because of this death, she couldn't. I didn't have a housekeeper and I had my daughter there who doesn't film ... anything could go wrong."

"So Heather, being fake, decided to come in and film and say, 'We're outside and we're freezing,'" she added, accusing her former co-star of "playing it up for the cameras."

However, Heather said "it "was real as real can be," describing the moment as when she "turned on Sonja" and then alleged that she had allowed men to put lit cigarettes into her genitals. It's unclear if Dave Quinn asked Sonja about Heather's claims.

"That's actually when I turned on Sonja, because I had literally carried that woman home," Heather recalled. "I had scraped her off carpets. I had taken her out of a vestibule where she was letting guys put lit cigarettes in her vagina."

"I had done so much for that woman," she continued. "And here we are, waiting to go to Atlantic City. We all arrived at her house, but the limo wasn't there yet. And it was raining out. Well, she would not let us in."

According to Sonja, "they all had coffee and breakfast paid for by production and had separate Town Cars to sit in." She also claimed the schedule said they weren't to film in Sonja's town house.

"So they were supposed to be in their cars waiting to get into the party bus, and I was on the phone upstairs with my sister, and I was upset and crying about this death," she said. "And I've got the bitches downstairs complaining they can't come in and I don't have a seat in my front entrance."

However, Heather then went into Sonja's town house. "[I] called up the stairs, 'Sonja, the car's not here yet, we're going to come inside and just sit on the couches.' So I'm walking up the second floor and one of the interns comes barreling out being like, 'Lady Morgan asks if you can please wait in the vestibule.'"

Heather said she went back downstairs and called Sonja but she didn't answer. "'Sonja, we're downstairs in the vestibule and it's f--king freezing in here. The walls are leaking from the rain. Can't we just come inside and wait?'" she recalled. "And the fact that she would not let us in her house. I was so f--king incensed."

Continuing her account of events, Sonja expressed her frustration over Heather coming into her house, noting that she wouldn't have done the same thing "if the situation were reversed."

"Wait in the f--king car! Rudeness!," she said. Sonja also accused Heather and Kristen of "spill[ing] coffee on [her] gold-inlay family table" and "sitting on a sixteenth-century chest in [her] front entrance that's worth at least a half a million dollars."

Sonja has been a cast member on "RHONY" since Season 3. As for Heather, she was featured as a Housewife from Season 5 to 7. She then appeared as a guest on Seasons 8 through 10, as well as Season 12. In Season 13, Heather was scheduled to film as a "RHONY" friend for the entire season, but left after a few episodes following a squabble with Leah McSweeney during a trip to the Hamptons.