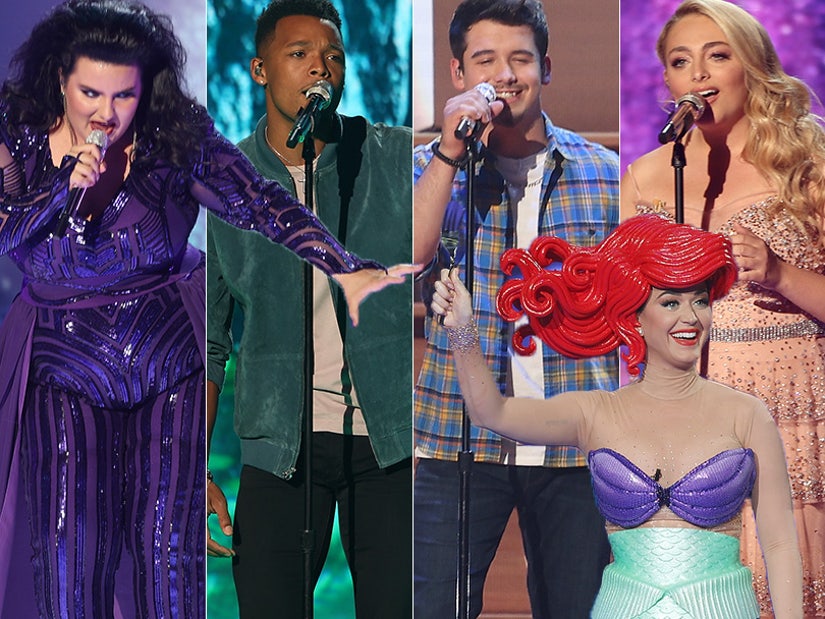 Disney Night came to “American Idol” and it was definitely a wild one -- and it had nothing to do with Animal from the Muppets crashing the stage for an impromptu drum solo.

Miss Piggy also showed up, ready to perform, to host and possibly even take over one of the spots on the judge’s panel. Honestly, after the way the show opened, that joke could have quickly become reality. 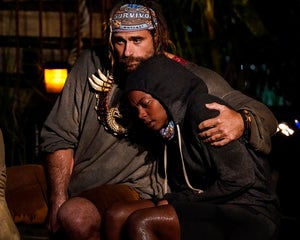 We knew Katy Perry was a sucker for a costume, but she may not have thought this one through fully. Fully encased in a fishy tail to bring “Little Mermaid” Ariel to life, Katy had to be wheeled out, carefully put in her chair -- and then she still promptly fell out of it, flat on her back!

She took it like a champ, though, with Ryan Seacrest even rushing over to help in the middle of trying to keep the show on track. Once righted, Katy was all smiles again, brushing her hair with her dinglehopper. It was definitely a great way to break the tension for the contestants, as they could be seen laughing (once she was definitely okay), as well.

That tension did help, as the Top 10 delivered an extremely strong night of performances, including the first-ever villain’s song! Derek Hough joined the contestants at Disneyland for some mentoring, between being surprised by their loved ones, to create a truly magical week.

Unfortunately, unlike many Disney Nights past on this show and other ABC reality shows, this one didn’t end with a surprise non-elimination. At the end of the show, it was business as usual with three of the Top 10 getting eliminated, revealing America’s Top 7.

And just for fun, I'm going to rank the performances from worst to first to see who my favorites are each week. That way I can see who's the best and then see if you get it right with your votes -- i.e., agree with me. 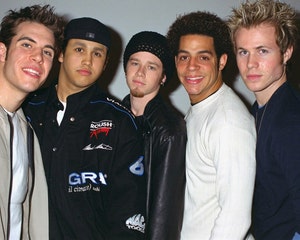 Ashley Parker Angel Still Has 'A Bit of Bad Blood' with O-Town, Despite Recent Reunion

(“We Don’t Talk About Bruno,” from “Encanto”) This is still such an unexpected song to be a breakout hit as a Disney single, but we can’t take away anything from this talented Top 10 in tackling the earworm of a song. Each of them had spotlight lines and no one stood out as totally out of place on the track. Just from watching this, we were immediately nervous about what the rest of the night portends -- every left is so good and unique in their lane!

(“How Far I’ll Go,” from “Moana” - 25, Tuskegee, AL) This song almost never fails to elicit raw emotion, and yet Lady K didn’t quite get us there. She had a few sharp notes, had a few issues with her breathing early on, and it just didn’t hold together consistently to capture us into the beautiful message and poignancy of the song. And yet, this song is all heart, and it was clear that Lady K was feeling it as she was singing. Was she a little too emotional?

Lionel is right in how far she’s gone already, but we still don’t think she’s got the makings of the next “Idol.” At the end, she acknowledged she got a little overwhelmed while performing, which is a shame. Channeled properly, emotions can create magic, but they can also take over if not harnessed. 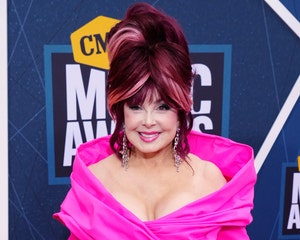 (“You’ll Be in My Heart,” from “Tarzan” - 27, Warrenton, VA) Considering he was singing this for his mother as she battles leukemia -- and Derek advised him to tap into that raw emotion -- this was a surprisingly clinical performance. We’ve gotten more emotional connection out of him on songs that didn’t have nearly the emotional impact. Even Phil Collins performed this with more heart. He has a great richness in his voice, and sounded great, but at this stage of the competition, everyone sounds great. Without artistry and connection, you’ll fall behind.

(“When She Loved Me,” from “Toy Story 2” - 20, Normal, IL) Leah had a lovely tone and a very earnest delivery, so we’re not sure why this wasn’t touching us as much as it probably should have been. Her sweetness carried through, and it was clear how much she connected to the song, and how much it meant to her as she performed it. And it was sweet. Honestly, this may be the most perplexed we’ve been all season long, because there’s nothing clear to nitpick. And we didn’t dislike it; we just weren’t as drawn to it as we’d have liked.

(“Carried Me with You,” from “Onward” - 16, Cleveland, OH) Derek did a great job of bringing a little more stage presence out of her, even as she just stood behind the mic and delivered. Vocally, Emyrson was as strong and confident as we’ve seen her, with a lovely slow vibrato on some of her lower notes. She was a little less breathy than usual, which was a good choice for this song, but didn’t lose that thick texture in her voice that makes it sound so full. A great song choice and a more confident delivery; she’s definitely moving in the right direction. 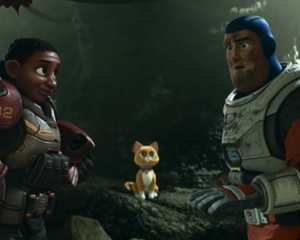 (“Go the Distance,” from “Hercules” - 28, Dansville, MI) Fritz is a world-class talent with a beautiful cry in his voice, but this performance felt like it was at times too little and at other times too much. We still love his natural tone and are on board with most of the song choices he makes, and how he interprets them, but this one felt a little too treacly, as if it was trying too hard to be sentimental. We just weren’t feeling as much from him as we have in the past -- and in fact, until those closing few bars, we weren’t feeling anything at all.

(“You’ve Got a Friend in Me,” from “Toy Story” - 20, Louisa, KY) Noah has that natural subtle rasp in his voice, which makes this the perfect song choice for him. His natural tone is reminiscent of Randy Newman already, and immediately had us feeling both nostalgic and a little emotional. It wasn’t the most dynamic performance, but it was all heart and felt totally sincere. It was sweet, too, that he dedicated it to his friend Arthur, who basically forced him to audition. That’s a true friend!

(“Remember Me,” from “Coco” - 23, Salisbury, MD) Jay continues to grow as an overall artist from the over-confident smiley singer he was until getting nearly eliminated. This could have used stronger enunciation through his falsetto at times, but it was a stunningly gifted vocal performance top to bottom as far as what he can do with his range. There’s no one who can go where he goes; he just needs to work on finding the artist behind all the talent. He’s making progress in that direction, but we still were more impressed than moved by this performance. 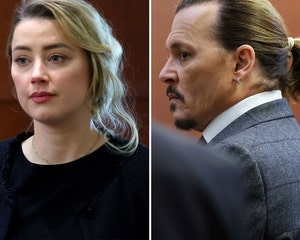 (“Circle of Life,” from “The Lion King” - 21, Patchogue, NY) Christian really surprised us on this one, turning an iconic song into a powerhouse anthem that he navigated with such ease and finesse, it was like he wasn’t trying at all to hit all those huge notes. This was the kind of performance that gets you on your feet, jaw hanging open, as you are just in awe of the power and strength before you. It’s the biggest moment he’s had yet in the competition, and as soon as it was over he was just as unassuming as ever -- which is adorable.

(“I See the Light,” from “Tangled” - 23, Winchester, TN) We knew HunterGirl was the real deal as a country artist, but she proved herself a world-class singer of any stripe with this performance. She may well be one of the best voices that will ever come through the “American Idol” machine, like the Jennifer Hudson, Kelly Clarkson and Carrie Underwoods of the world. There was such a purity in her voice, it was clean and sweet and filled with such beautiful sincerity. We love her when she’s in her element, but this was an incredible moment.

(“Poor Unfortunate Soul,” from “The Little Mermaid” - 18, Toronto, ON) An absolutely inspired song choice that perfectly fit Nicolina’s natural vocal flair for the dramatic. She embodied the attitude of Ursula flawlessly, with all the snark and sarcasm and sinister undertone. It’s a testament to her artistry -- and acting -- that she could put so much character into the performance without sacrificing vocal quality. This was also a tour de force of her ability. It was a huge step back in the right direction for the powerhouse. We also got a huge kick out of Katy Perry’s in-character reactions as Ariel. 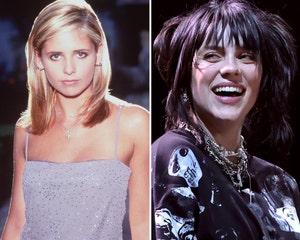 Fritz Hager was the biggest surprise in a not-so-great way tonight, though we didn’t think it would necessarily cost him a shot in the competition. He’s too loved and too deserving to continue. However, three did have to go.

Based on our rankings, those three would be Lady K, Mike Parker and Leah Marlene. However, we weren’t so confident that Leah Marlene would go. The judges loved her more than we did tonight, and we usually adore her, so we believe her season so far is stronger than tonight.

That left us with Emyrson Flora and Fritz at the bottom of our rankings, but just above Leah. Honestly, we could see it coming down to a battle between Leah and Emyrson. But in that battle, we suspected it would be Leah who would emerge victorious, as she has such an endearing personality.

To build the Top 7, Ryan first sent Leah, so we were right to doubt that she would be booted after her stellar season. She was quickly joined by Jay, Noah Thompson, Fritz, HunterGirl and Nicolina. 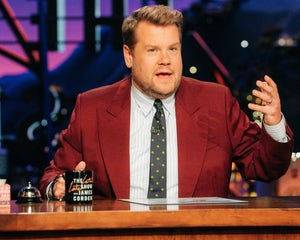 That left our Bottom 3 prediction standing alongside Christina Guardino, who we’ve admittedly wanted to boot in recent weeks. It just felt to us like he had a strong night tonight with a powerful vocal. But did America agree?

They did, which was a huge relief for Christian and us as we’ve not been nailing these predictions as well this season. It’s nice to see us back in form -- or at least, it’s nice to see America getting it right.

All three eliminated finalists were really strong in their own way this season, and all had incredible journeys. Lady K found her elegance and her confidence as a person as much as she did as an artist. Mike discovered what kind of artist he is, prepared now to make a unique stamp on music. And Emyrson is still finding her way as such a young artist, her path is wide open.

“American Idol” returns Monday night for a special “Great Idol Reunion” episode before trimming back to just Sundays at 8 p.m. ET on ABC starting next week. 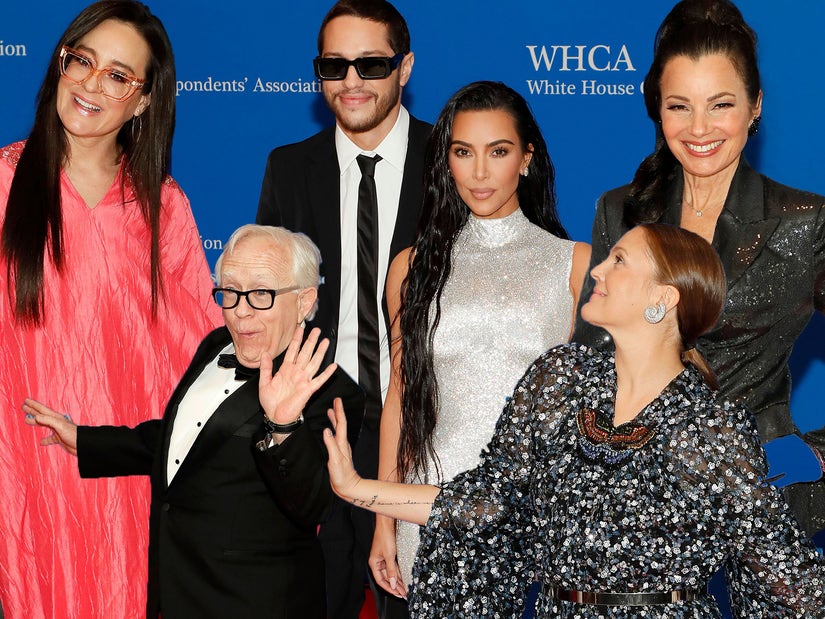