Nominations for the 69th Golden Globe Awards were announced (bright and early) Thursday morning, and while a lot of nods in the major categories were expected, there were a ton of surprises and more than a few snubs. 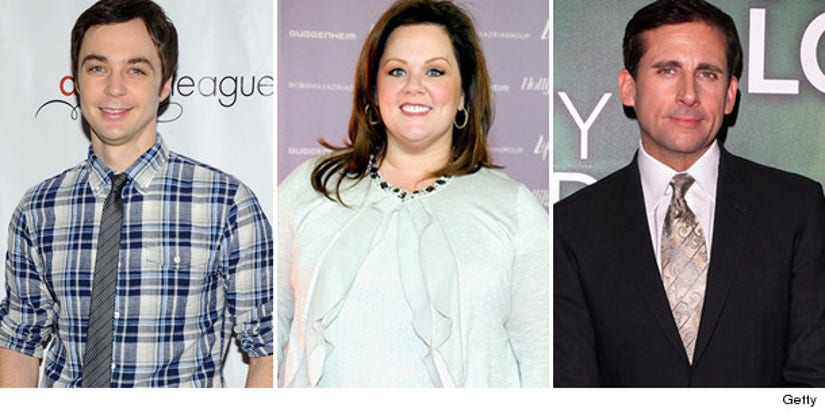 - "The Ides of March" was entirely shut out of the Screen Actors Guild Award nominations, yet scored 4 Globe noms (Actor in a Drama for Ryan Gosling, Director, Screenplay and Best Drama).

- We knew that the Hollywood Foreign Press liked George Clooney, but didn't realize quite how much. The multi-talented 50-year-old racked up 4 nominations this morning —Actor in a Drama for "The Descendants," and Director, Screenplay and as producer for Best Drama for his political thriller "The Ides of March.”

- Ryan Gosling continues his hot streak of the year and was nominated for Actor in both the Drama and Comedy categories – neither of which was for "Drive." In the comedy category, his role as Jacob in "Crazy, Stupid, Love." earned him a nod, and in the Drama category he will compete against his "The Ides of March" director and co-star, Mr. Clooney.

- It was anticipated that "Moneyball" star – and Golden Globe favorite -- Brad Pitt would receive a nod for his lead role in the baseball flick, which he did, but Jonah Hill's nomination in the Supporting Actor category was a bit of a shocker.

- On the TV side, the Starz show “Boss” was nominated for Best Drama and Best Actor for Kelsey Grammer. No offense, but did anyone even know this show was on the air?

- Several films with huge stars, buzz and critical acclaim were completely excluded from receiving nominations. The critical darling Brad Pitt flick “The Tree of Life” was shutout in all categories, as was the Tom Hanks and Sandra Bullock-starrer “Extremely Loud and Incredibly Close.” Gary Oldman's turn as spy George Smiley in the buzzed-about “Tinker Tailor Soldier Spy” also went unrecognized, as did the film itself.

- Melissa McCarthy had a breakout year in 2011, earning an Emmy Award for her title role on CBS' "Mike & Molly," and receiving critical and audience praise for her hilarious turn in "Bridesmaids." She wasn't nominated for either project. Other notable snubs fall in the Actor in a Comedy category: Jim Parsons was ignored for "The Big Bang Theory" -- though his co-star Johnny Galecki earned a nod -- despite the fact that Jim won the Globe last year and the Emmy the past two years, and Steve Carell was overlooked for his final season on "The Office." Steve had been nominated the previous 6 years, winning once.

- On the TV side, the biggest snub of the day had to be the oversight of "Breaking Bad" for Best Drama. The show just came off of its most explosive (literally) season to date, and to be left off the list in place of a show that most people have never heard of (we're looking at you, "Boss") is a travesty. Oh, and Giancarlo Esposito being overlooked in the Supporting Actor category is also pretty sad.

- Other shows that were surprisingly snubbed include awards-favorites "30 Rock" (though Tina Fey and Alec Baldwin did receive acting nods) and "Dexter," along with its star Michael C. Hall. Also, we were really hoping for a Best Comedy nomination for "Parks and Recreation" and something, anything, for the final season of the amazing "Friday Night Lights."

- Nominees in the Best Original Song category are all names we've actually heard before!

Elton John for his song in “Gnomeo & Juliet;" Chris Cornell for his tune in "Machine Gun Preacher;" Glenn Close (yes, that Glenn Close!) for writing the lyrics for the song in "Albert Nobbs" – a film for which she also earned a Best Actress in a Drama nod; Mary J. Blige for her ballad for "The Help;" and Madonna for her song in the film she also directed, "W.E."

- "Community" fans, here is one small solace for you. Though the more-than-worthy show continues to be overlooked by all awards shows in all categories, take heart that Jim Rash -- who plays Greendale's ridiculous Dean Pelton -- received a Globe nom for his writing work on "The Descendants." It's nice to know that at least one Human Being has been recognized for something?

What were your biggest surprises or snubs? Sound off below! The Golden Globes air Sunday, Jan. 15, 2012.