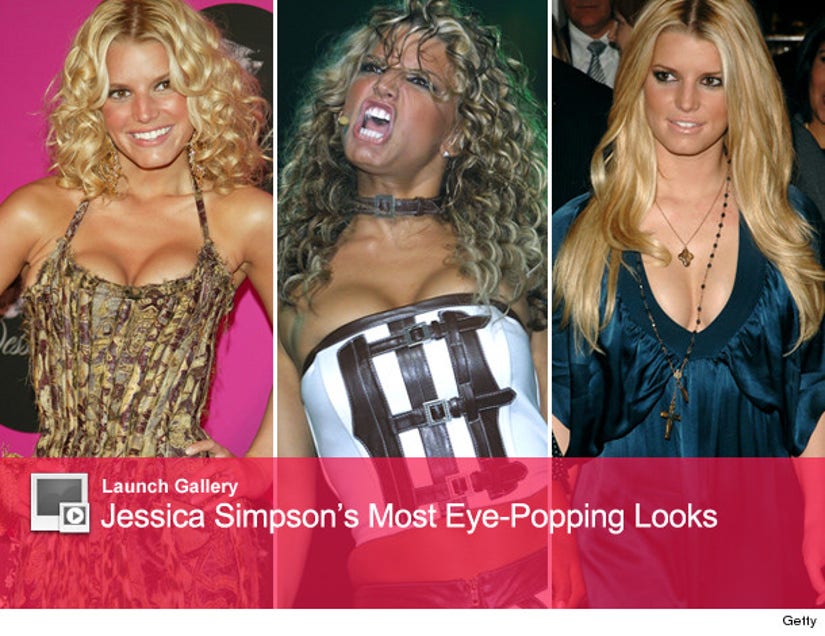 She gained fame along the likes of Justin Timberlake, Britney Spears and Christina Aguilera. And while Jessica never gained quite as much musical acclaim as the ex-Disney stars, she's definitely made a name for herself over the years!

Simpson wed boybander Nick Lachey in 2002, and the couple's reality series "Newlyweds: Nick & Jessica" solidified Jessica's status as a natural-born entertainer. Who can forget when she asked if her tuna was chicken or fish?

Since calling it quits with the 98 Degrees front man in 2006, she's started a super successful fashion line that's raked in over a billion dollars. She's also one of the judges on the NBC series "Fashion Star" alongside fellow designer Nicole Richie.

But on the top of her list of achievements, she can now add mother! Jessica and fiancé Eric Johnson welcomed baby Maxwell May 01, 2012.

As the blonde bombshell turns another year older, we thought it would be fun to pull 32 of her funniest quotes for the occasion! Enjoy.

1. "All I have to say is: Jessica Simpson is the most beautiful woman on the planet!"

3. "At school my boobs were bigger than all my friends' and I was afraid to show them. Now, I feel they make my outfits look better. They're like an accessory."

5. "I made sure no butt cheek hung out. You know, the original Daisy, Catherine Bach's shorts were shorter than mine."

6. "I respect knowledge of the psyche. I would be a therapist if I weren't an entertainer."

7. "I think that freshness and that innocence is something that is missing from a lot of female singers. I'm certainly not denying that I'm young, but I'm not fluff."

8. "I think there's a difference between ditzy and dumb. Dumb is just not knowing. Ditzy is having the courage to ask!"

10. "Is that weird taking my Louis Vuitton bag camping?"

12. "On my first day of Jr. High I was in Geography class, and the teacher asked us if anybody knew the names of the continents. And I was sooo excited. I was like, Damnit! It's my first day of 7th grade, I'm in Jr. high and I know this answer. So I raised my hand I was the first one and I said A-E-I-O-U!"

13. "Whenever my water breaks it'll be like a fire hydrant!"

15. On getting pregnant: "We weren't trying, but we were definitely practicing -- and not safely practicing."

18. "I've almost had my license taken away because I ran so many red lights. But it was worth it. Everybody was safe, I must add. I haven't killed anyone."

21. "I kinda want to be the Reese Witherspoon of the music industry -- the girl next door who wears a great dress and has great hair."

22. "I will never do nudity. I don't care how dark and intellectual the role could be, you know...I don't care if I frickin' could get an Oscar for it, I'm not going to do it. Those accolades mean nothing to me. I don't think people deserve to see what's under my clothing. That's only for my next husband-ha-ha-ha."

23. "Musically, my dream is to do what Norah Jones did. I can't play the piano, but to sit next to it and just sing."

24. "My mom was really worried I'd grow up looking strange, so every night before I went to bed, she'd pull my legs and stretch them so they'd be in proportion with the rest of my body."

25. Introducing herself to U.S. Secretary of the Interior Gale Norton in December 2004: "You've done a nice job decorating the White House."

26. "My bra and underwear always have to match. I love that. I've collected a whole lot of sets. When a girl has on color-coordinated underpants, she just feels sexy. And I've been a cheerleader, so I should know!"

27. When someone offered her buffalo wings: "Sorry I don't eat buffalo."

29. "I hate record labels. They think they know everything. I want to hear them try to sing it."

30. On golfing: "What if I accidentally hit somebody? Because my dad took one of his friends golfing, and it was, like, one of his first times and he knocked out a duck. Like, I'm scared that's going to happen."

32. "I'm really clumsy, so I trip and fall a lot. And every time I perform in New York my pants split onstage. That's happened four or five times. Every time, I pull on my mom's jeans as fast as I can, so there we are, standing backstage without our pants on. It's like a curse."