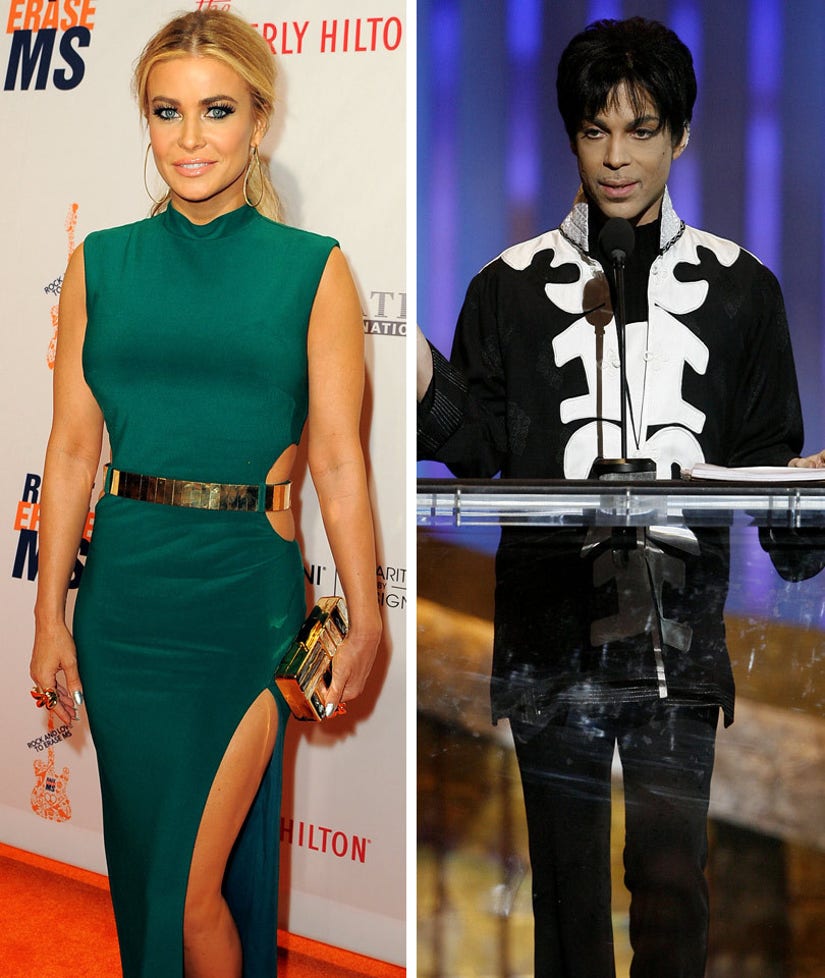 Carmen Electra is just one of many stars who's stunned and saddened by Prince's sudden death. The music icon, 57, died on Thursday at his Paisley Park estate and studio in Chanhassen, Minnesota.

"I was so shocked and heart broken to hear about the loss of my mentor, Prince," she tells toofab in a statement. "The world has lost a truly incredible spirit and musical genius. What a blessing it is to be one of the chosen ones who had the chance to work so closely with him. He gave me my name, he believed in me, and he has inspired an entire generation. I will always love him. 'Sometimes it Snows in April.'"

Prince's ex-wife Mayte Garcia also released a statement. "“I can't even think of the words of what I'm feeling. This man was my everything, we had a family. I am beyond deeply saddened and devastated I loved him then, I love him now and will love him eternally. He's with our son now," she says. Their son, Gregory, passed away from Pfeiffer syndrome a week after his birth.

Sheila E., who was once engaged to the singer, tells PEOPLE, "The meaning of the word loss has taken on a new meaning this day. Thank God love lives forever."

Carmen credits the legend for jump-starting her music career. In fact, it was Prince who transformed her from Tara Leigh Patrick to Carmen Electra back in the day. At the time, the aspiring singer was auditioning for an all-girl group, but Prince had bigger plans for her.

"I received a call from Prince saying I think you should be your own artist and not back up anyone else. I'm going to write you a song and if you like it, you can record it," she remembered during an interview on Oprah's "Where Are They Now?". "The name of the song was 'Carmen on Top.' My name is Tara, so I was confused. I loved the song. I loved it, but he said, 'You're not a Tara. You're not Tara. You're Carmen."

"He controlled everything, but I loved that about him," she told E! News. "How I dressed, the music, hairstyles. He was genius at all that."

"I told him I wanted to live in LA and he spent as much time here as he did in Minnesota. He wanted me to move back to Minnesota and I said no. I broke it off with him and stayed in LA," she explained of their relationship fizzling out. "I gave up everything with him to live here and make my own career. It was a hard time. I ended up calling him and he hired me to dance at his club in LA. I made $90 a week. I wasn't his girlfriend anymore, but I was one of his girls. This was after we split."

Despite their differences and a lack of communication in recent years, Carmen still credits Prince for launching her career.

"He picked a select few to believe in and taught us everything," she declared. "I think of Prince every day."