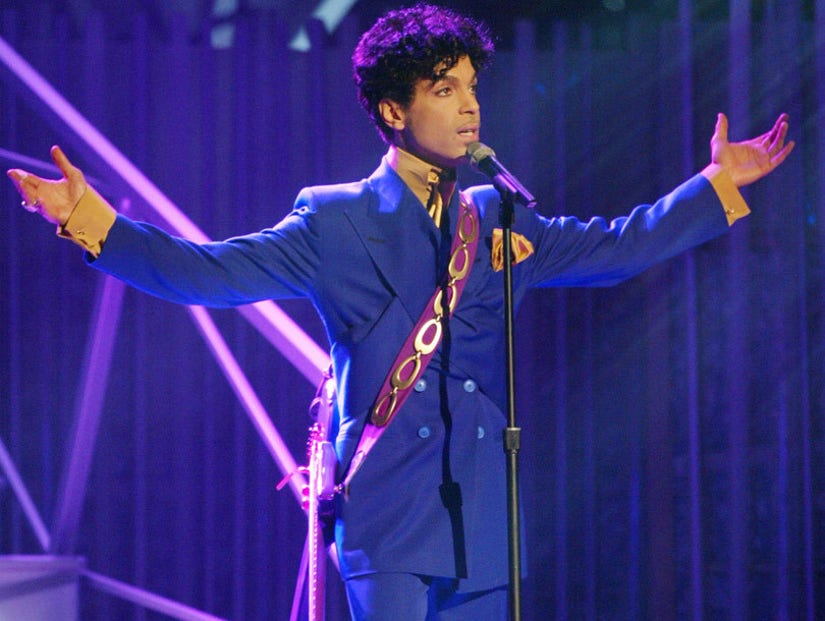 The entertainment industry said goodbye to a giant on Thursday with the death of Prince, who passed away at the age of 57 at his Paisley Park estate in Minnesota.

Almost instantly after news broke, words of condolences, personal memories and expressions of shock started filling Twitter, Instagram and Facebook, as Hollywood reacted to the death of one of their own.

With his incredible influence felt over the music, film and fashion industries, this is a massive loss.

In one of the more surprising online tributes, Will Smith revealed just how close he was to the music icon -- as they actually spoke on Wednesday evening.

"I am stunned and heartbroken. I just spoke with him last night," Smith shared on Facebook. "Today, Jada & I mourn with all of you the loss of a beautiful poet, a true inspiration, and one of the most magnificent artists to ever grace this earth."

"Prince was one of the first artists to put me on game in regard to the industry. He was not only a genius artist, he was kind, funny, beautifully eccentric, curious, imaginative, magical, spiritual, rebellious and extremely intelligent," added Jada Pinkett-Smith in her own post. "He showed me early the power of living one's life by one's own rules and no one else's. There are really no words to express what we have all lost today. To quote my friend Paress, 'Music has lost its heart beat.'"

"Today, the world lost a creative icon. Michelle and I join millions from around the world in mourning the sudden death of Prince," President Obama said in a statement. "Few artists have influenced the sound and trajectory of popular music more distinctly, or touched quite so many people with their talent. As one of the most gifted and prolific musicians of our time, Prince did it all. Funk. R&B. Rock and roll. He was a virtuoso instrumentalist, a brilliant bandleader, and an electrifying performer."

Sheila E., who has a relationship with Prince in the '80s, also released a statement. "The meaning of the word loss has taken on a new meaning this day," she tells PEOPLE. "Thank God love lives forever."

Genius, legend, inspiration, friend.
The world will miss you.
I'll never get over it. pic.twitter.com/RXIZdfGNPw

I can't believe it, I'm in total shock. So many wonderful memories,
I will miss him. #Prince

My friend is gone...This is what it sounds like, when doves cry. He was my
dove...Stevie Nicks

Here's to one of the strongest spirits the world has ever known 🌹 We will miss you forever, Prince. pic.twitter.com/vEGAd0HLxS

R.I.P. to the God Prince. Gone too soon but here forever. Sippin Purple Rain 4 the legend. There will never be another

Can't believe Prince is gone.
What a terrible year. So many, so young.

Today at my kids preschool the teachers played "purple rain" for them. My kid said she loved it. I started to cry. Love doesn't cover it

Good night, sweet Prince. He really was, too. Sweet, kind, unbelievably talented, a joy to watch and to hear. I can't believe it.

"A strong spirit transcends rules.” Prince, you will be missed.

Today we lost a true artist. Thank you #Prince for all the music you put into this world. #RIP pic.twitter.com/4yZ6Cb5hMb

Numb, full of pain for his royal badness has been snatched from us today . #ripprince

Unbelievable just heard about PRINCE. Strength and light to his family/loved ones. One of my favs and a true pioneering artist. RIP brotha.

I LOVED him, the world LOVED him. Now he's at peace with his Father. Rest in power, @prince, my brother. pic.twitter.com/ZN6cc3WWuF

Wow. I'm completely stunned and crushed. The music world has lost a legend. Prince was one of a kind. A talent unlike any other.

And just like that...the world lost a lot of magic :sparkles: Rest in peace Prince! Thanks for giving us so much...

Prince has left us
His soul touched us
His song reached us
We sing his praise
Rest gently in peace
Prince.You will be remembered #RIPPrince

Every dove is crying.

#Prince , surely not? Can we turn this year off and turn it back on when it stops being a giant exit for all the most talented people?

Prince was a true gentleman, a king among men. He was as sharp and as talented as they come. I'm so glad I was lucky enough to work with him

Meeting big stars is mostly disappointing in one way or another, but that was not the case w Prince. He was everything I hoped he'd be.

Moment of silence for the tremendous talent lost today. Prince

Numb. Stunned. This can't be real.

The word genius is overused. Prince, however, was a super-genius. Prolific and visionary. And always a sweetheart. Soundtrack of my life.

It's so sad he is gone so early. RIP to a legend.

This fucking sucks... Prince on repeat all day. Just like I did with Michael and Whitney 😔

Rest with the angels. pic.twitter.com/qAxNyxwIo2

I'm Crushed!! UK news reporting Prince Is Dead?! For Real?! Massive Loss for us all! What a Genius! Speechless.

"Dearly beloved
We are gathered here today
2 get through this thing called Life..."
-Prince

Gutted. Mourning with you.

Deeply saddened by the loss of a good friend, mentor & Icon. May he rest in peace & his legacy live on 4ever. Prayers to his Fam #RIPPrince

Prince was the greatest live performer I ever saw.
A musical genius ablaze with astounding, sexually charged energy. Loved him. RIP

I loved Prince's music. He had such an impact on art. RIP. You're already missed.

I had the privilege of seeing Prince live a few years ago, and it blew my mind. He's one of those rare artists who somehow only got better.

Heartbroken to hear about the sudden passing of Prince. RIP. 💔 #Prince

What a year for losing legends.

Is there some sort of curse? Why are all the legends going?? RIP #Prince X

Please don't let it be true. I can't imagine the world less Purple.

#RIP Prince. What a terrible year for rock legends. pic.twitter.com/hwQcv3ywIb

Prince is dead. Can I just go back to bed for the rest of my life? RIP to the lavender genius. 💜

"Artist" & "Genius" are thrown around carelessly these days. Prince Rogers Nelson was an actual artist & a legit genius. I'm so sad#RIP

Yes,its true! Prince has passed at 57 of a flu.. I'm in shock! Its like Micheal Jackson dying all over again. Such a true icon!

So sad to hear about Prince- We've not only lost an incredible talent but we've lost a legend. 💜

No!!! Just learned that Prince has died! 1 of the best performers I ever saw. Too soon. RIP Prince.

Taking off for New York with a heavy heart. I will leave you with this- Prince live from the Capitol Theater, 1982. https://t.co/m9m837OBK0

This is so heartbreaking💔 I had this Prince pic drawn on my wall years ago because his music inspired so many R.I.P😥 pic.twitter.com/60msa6hm3I

Words cannot describe the gigantic crater left in the wake of the death of #Prince. This one truly hurts. RIP. The doves are crying.

So sad to hear about this terrible loss, Prince was a visionary musician and artist.
https://t.co/49ZY5IFpUL

I am in complete shock right now at the passing of #Prince . He was a huge musical influence on me and so many others. A true genius

I got to see @prince in concert this past summer and I was blown away by his talents and his generosity to (cont) https://t.co/btGFxGz5Uq

A music legend #Prince The world has lost a bit of magic today. :pray:

I am really not right over this. RIP #Prince this is devastating.

My deepest condolences go out to family/friends of #Prince #RIPPrince. He was such a great and fiercely independent… https://t.co/GyskChLUko

Please please please tell me this is a hoax!!!! I can not believe this!! #prince pic.twitter.com/5NPMznzDpK

Another icon gone too soon.

Prince dead at 57. Remember if u attend his wake u can't look directly at the body

RIP Prince a true legend in this music industry :pray:

This is what it sounds like when doves cry.. Prince R.I.P.
Condolences to his family & 2 us all

Sending love out to #Prince #AmericanGenius Thank you for all you gave us- https://t.co/fGX0MSfQd3 via @youtube

So sad to hear about the loss of Prince today. #RIP #legend #purplerain 💔 pic.twitter.com/GwbL8R975M

I'm stunned & so saddened to hear about the passing of Prince. He changed it all!!!! The true definition of talent!! pic.twitter.com/Ni17GvPu67

R. I. P to the King Prince thank u for inspiring me to be a Musician First and using this tool to heal people

RIP Prince. I was a huge fan. I'll be listening to him all day today.

Purple Rain changed my life. The album and the movie. I can't deal.

R.I.P. Prince ... One of Miles Davis' last collaborators. You will be woefully missed ...

Already a bad year for losing musical legends. Gigantic kick to crotch to lose Prince so young. So sad.

sweet, smooth transitions Prince. thank you for your medicine.

#RIPPrince, the world was lucky to have an artist like you.

RIP Prince.... all of the greats die so young but We will have your music 4ever

"Paint a perfect picture. Bring to life a vision in one's mind. The beautiful ones. Always smash the picture. Always every time." #Prince xo

Seems like I'm in a dream. @Prince dead at 57. There are no words to describe this loss.