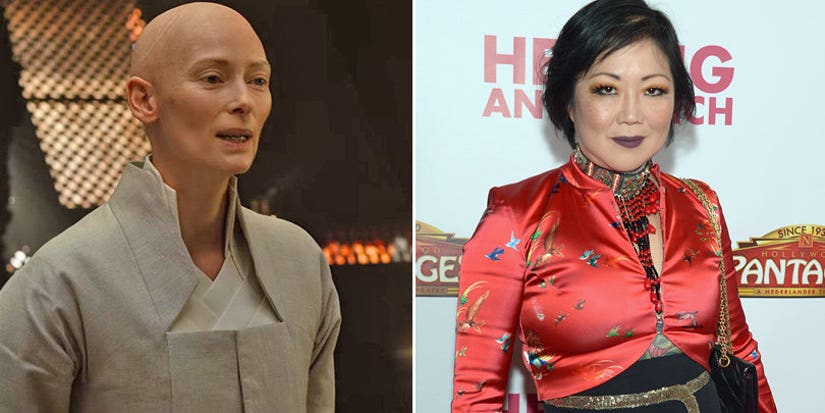 Margaret Cho has reignited the whitewashing controversy surrounding Tilda Swinton's casting as Ancient One in "Doctor Strange" after remarks she made during a podcast went viral on Friday.

During an interview on Bobby Lee's TigerBelly podcast, Cho said Swinton had reached out to her via email for some insight into the casting backlash. But Cho described the back and forth with the Oscar-winning actress as a "long conversation" and "weird."

"Tilda e-mailed me and she said that she didn't understand why people were so mad about 'Doctor Strange' and she wanted to talk about it and wanted to get my take on why all the Asian people were mad." Cho said on the podcast. "Long conversation and it was so weird. But we had a long discussion and she also wanted me not to tell anybody, so don't tell anybody."

"But it was a long, kind of a fight about why the part should not have gone to her, that's what I thought," Cho continued. "We had a fight about it and basically it ended with her saying, 'Well I'm producing a movie and Steven Yeun is starring.' It was weird because it was like I felt like a house Asian, like her servant, sort of her confidant. Like I was following her with an umbrella. I had a weird feeling about the whole exchange, especially the part about don't tell anybody."

But Swinton has apparently taken offense to Cho's characterization of the email conversation, and now has released to TooFab the email exchange in its entirety.

Of the emails below, a rep for Swinton told TooFab: "Please note the inaccuracies in Margaret's assessment of their conversation, starting with her implication that they talked at length when they only e-mailed a few times. Also note that Margaret seemed to imply Tilda was trying to get points by saying she had just produced the film Okja with Steven Yeun when she only mentioned it after Margaret suggested that she produce a film with Asian actors."

Read the Swinton and Cho's e-mails in full here:

We've never met, but you've been in my head for years - I'm a fan.I want to ask you a favour now which is sprung out of a truly important social conversation but may be heading for some crazy-making shit.The diversity debate - ALL STRENGTH to it - has come knocking at the door of Marvel's new movie DR STRANGE.I am told that you are aware of this. But since I am that extinct beast that does no social media, I am unaware of what exactly anybody has said about any of it. I believe there are some ironies about this particular film being a target, but I'm frankly much more interested in listening than saying anything much.

I would really love to hear your thoughts and have a - private - conversation about it. Are you up for this? Can we e-mail?

No wrong answer here. Tell me to fuck off if you feel like it. In any and every case,Much love to you,

Sure! I'm a big fan of yours - since orlando!

Well, what do you know so far? I can tell you from my perspective what's happening!

The character you played in Dr Strange was originally written as a Tibetan man and so there's a frustrated population of Asian Americans who feel the role should have gone to a person of Asian descent.

The larger part of the debate has to do with the 'whitewashing' of Asian and Asian Americans in film. Our stories are told by white actors over and over again and we feel at a loss to know how to cope with it.

Protest seems to be the only solution- we just want more representative images of ourselves in film. TV is getting better in terms of diversity but film is lagging behind.

Anyway - hope this helps! We can totally email and we can be private! Best, m

Here's the situation I reckon Marvel was in. The old comic books from way back when are stuffed with stereotypes that we could all find offensive for any number of reasons.

The film - like any film adaptation - is a riff on the books. The Ancient One may have been written as a Tibetan man in the comics, but Marvel, in a conscious effort to shake up stereotypes, wanted to avoid tired cliché. They cast Chiwetel Ejiofor as the second lead - a white Transylvanian in the books. And wrote a significant Asian character to be played by Benedict Wong.

With The Ancient One (the 'wise old Eastern geezer' Fu Manchu type in the book), wanting to switch up the gender (another diversity department) and not wanting to engage with the old 'Dragon Lady' trope, they chose to write the character as being of (ancient) Celtic origin and offered that role to me. Presumably on Ancient grounds. I accepted happily, impressed that, for once, they aimed to disrupt the 'wisdom must be male' never-ending story - and, by the way, for once, wanting to feature a woman who's a badass, over 26 and not simply bursting out of a bikini.

The biggest irony about this righteous protest targeting this particular film is the pains the makers went to to avoid it.

A - personal - irony to my being even remotely involved in this controversy is what I stand up for and always have. Whether it is challenging the idea of what women look like, or how any of us live our lives, or how we educate our children, diversity is pretty much my comfort zone. The idea of being caught on the wrong side of this debate is a bit of a nightmare to me.

I am as sick as anybody at the lack of a properly diverse cinematic universe. Pretty much sick of the Anglophone world in general, sick of all the men's stories, sick of all the symmetrical features and Mattel-inspired limbs..

I'm a Scottish woman of 55 who lives in the Highlands. There's precious little projected on contemporary cinema screens that means a great deal to my life, if truth be told.

How best might we focus this thing? To offer intelligent and empowered thinking.. And see something constructive coming out of this moment?

Ducking the issue is not what I am about. I want to meet it, but, if possible, move things forward by how I meet it.

I realise, as far as I am concerned, this possibly means saying nothing: so far I have attempted to correct the notion that I accepted an offer to play an Asian.. (!!) the most significant and damaging misunderstanding out there, it seems. Beyond that, I don't feel it appropriate for me to add anything, certainly at this point.

But I would love to know what ideas you - or anyone you know - have of something properly progressive to bring to this table. The debate is so important for all of us. It needs to build itself on strong ground.

I'm totally unfamiliar with all the comic books so I can't speak on anything about that - and the efforts to make this film more diverse is unfortunately lost in the translation here. Hopefully that comes up more when the film comes out and is finally brought to audiences!I think that it's just a timing thing - Asian Americans are fed up with not being given roles even if the part called for someone of Asian descent - and that the Ancient One role was being used as another example of 'whitewashing'. Social media has grown to the point where we can use it effectively to express - well whatever.

I believe very much that you as an artist are about diversity and your body of work shows that - but this particular case of the Ancient One is just another in a long list of 'whitewashed' Asian characters and so you're likely to feel the heat of history.

I am not sure what to say other than I am glad you want to meet the issue head on - it's a tough one I know.

I think that talking about the issue frankly - as you have done with me is the right way to go. It's hard I know - people get very angry and it's difficult to know what to do to get around that anger. But you should know that it's anger built up over many many years of invisibility within film/tv/media that's just exploded now with this film. And it's not just you - It's also directed at Scarlett Johanssen for Ghost in the Shell.

Maybe what's best is the highlight the diversity that you do see in the film and that being why you felt drawn to the project.

Also acknowledge that you're all about diversity and how you want the films you make to be diverse and how film can benefit from that.

I'd even suggest getting into producing content that would give Asian American voices a platform? That's really what is being asked for. Asian Americans feel as if we have no place in film and so we want one to be created. Whether that is found in supporting projects that would bring Asians into the foreground or even just discussing what it would take to do such a thing would help.

I can't thank you enough for this.

It really helps me sort out the lay of the land. To be continued.

By the way, the project I have been developing as a producer over the past two years is with Bong Joon Ho - my colleague from SNOWPIERCER - a film called OKJA shooting this summer in Korea, NYC and Vancouver - to my knowledge the first ever half Korean/half English speaking film, which we are making with Plan B and Netflix, in which the lead is a 14 year old girl from Korea and which stars Steven Yeun, amongst others.. fingers crossed it will be a big deal and help the landscape somewhat.. I hope and believe it will..