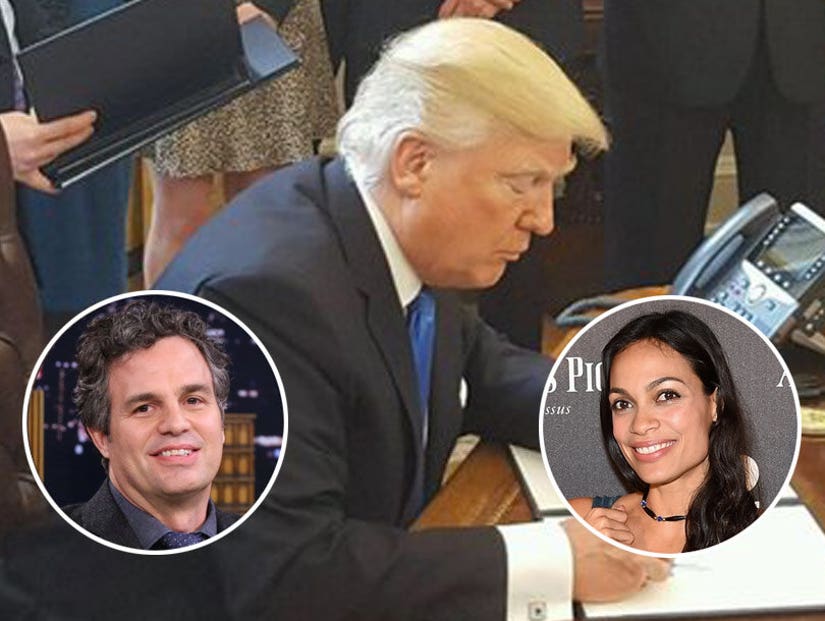 It's only his fourth day in office, and President Donald Trump is already stirring pots by choosing to move forward with a fossil fuel project that celebrities, climate scientists and even former President Barack Obama have overtly opposed.

The White House confirmed Tuesday that Trump will use executive order to move forward with the Keystone XL and Dakota Access Pipelines.

Rosario Dawson, along with several other stars, expressed their dissent via Twitter.

"Counting on all to #StayLoud long after #WomensMarch just as we were before...! #NoDAPL #NoKXL #BankExit #UpToUs #WomensMarchOnWashington," she wrote.

Counting on all to #StayLoud long after #WomensMarch just as we were before...! #NoDAPL #NoKXL #BankExit #UpToUs #WomensMarchOnWashington https://t.co/4Mq1KbjBuK

Adrian Grenier tweeted: "#Trump's decision to expedite the #DakotaAccessPipeline affects ALL of our water. Stand w/ #StandingRock, call the #ArmyCorps 844-331-6920."

“We gather, he reinstates the gag order, we protest and he goes forward with DAPL. Make no mistake, this is a vindictive and vengeful man,” Jenni Konner tweeted in response.

We gather, he reinstates the gag order, we protest and he goes forward with DAPL. Make no mistake, this is a vindictive and vengeful man.

I continue to stand with Standing Rock. #NoDAPL. #StandWithStandingRock

For those who may not remember, the Dakota Access Pipeline was a project initiated to move oil from North Dakota to South Dakota, as well as from Iowa into Illinois. The aim of creating the pipeline was to help the U.S. become less reliant on transporting from other parts of the world, creating significant economic benefits to our country.

The pipeline was strongly opposed by The Standing Rock Sioux Tribe, which inhabits the area where the proposed pipe would run. If built, the pipeline would cause significant environmental harm to the tribe, as well as affect their supply of drinking water.

This is what Trump just signed off on.

"Join us in supporting the youth of Standing Rock as they fight the Dakota Access Pipeline, which will leak into their drinking water!" Jason Momoa wrote on his Instagram during a September endorsement campaign launched by young members of the tribe.

Mark followed up on today's sign-off, taking to Twitter once again: “DAPL and #Keystone would be disasterous for the people and the environment. Let's keep fighting brothers and sisters. #NoDAPL.”

DAPL and #Keystone would be disastrous for the people and the environment. Let's keep fighting brothers & sisters. #NoDAPL

The actor also shared a video explaining why DAPL and Keystone “must be stopped.”

DAPL & #KeystoneXL must be stopped. It's a step in the wrong direction. @350 @StandingRockST #NoDAPL pic.twitter.com/Tp8XYmsAid

Other noteworthy stars in opposition of the executive order are Shailene Woodley, Riley Keough and Susan Sarandon, who all joined Standing Rock Tribe members at a courthouse in Washington, D.C. last August to protest.