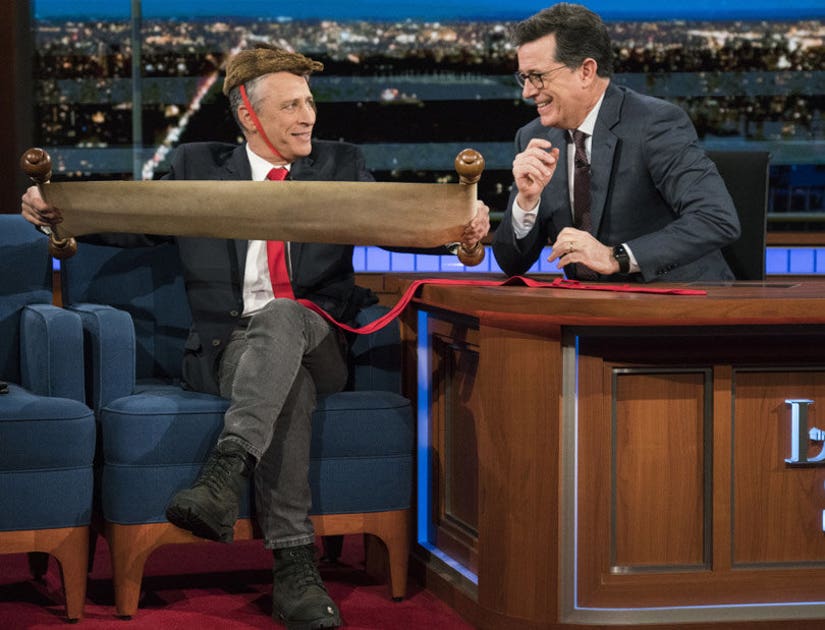 Jon Stewart returned to "The Late Show with Stephen Colbert" on Tuesday night in character as Donald Trump to announce some executive orders of his own.

The former "Daily Show" star sported a "super long tie" and "dead animal on head" while reflecting on "his" first 100 days in office.

"I, Donald J. Trump, have instructed my staff to speak only in bulls--t," Stewart mocked. "Bulls--t, all the time. Immersion, it-s the only way to be fluent."

But despite the comedian's ridicule, Stewart still maintained great hope for America, saying citizens have a "relentless stamina and vigilance" and have demonstrated that in numerous protests around the world since his Jan. 20 inauguration.

"We have never faced this before. Purposeful, vindictive chaos. But perhaps therein lies the saving grace of I, Donald J. Trump's presidency," he continued. "No one action will be adequate. All action will be necessary. And if we do not allow Donald Trump to exhaust our fight, and somehow come through this presidency calamity-less and constitutionally partially intact, then I Donald J. Trump will have demonstrated the greatness of America, just not how I thought I was gonna."

Stewart's repeat visit to late night is fueling speculation that he will return to the landscape to create short-form for HBO, according to reports. He previously signed a production pact with HBO in 2015 after his 17-year run on Comedy Central's "Daily Show."

Watch the segment below: