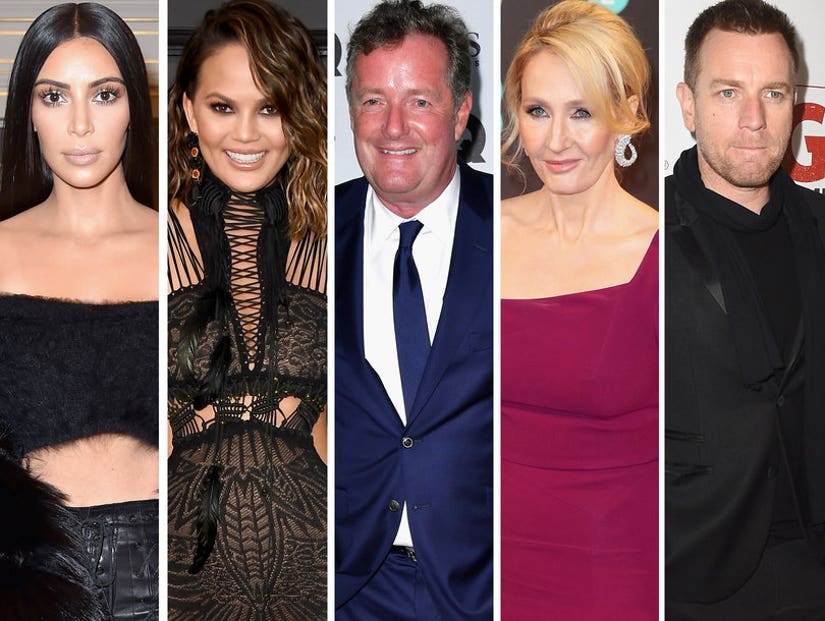 Piers Morgan makes headlines day after day for his trolling tactics on some of Hollywood's most elite.

His recent spat with "Harry Potter" author and Twitter Queen J.K. Rowling reminded us of all the times he's taken to the twitter to go after the who's who.

In a Monday Dailymail post, Morgan mentioned J.K Rowling in his list of "100 British Celebrities" who really matter at #97 saying,

"She would hate to be called a celebrity, and guards her private life intensely, so she doesn't play any part of the celebrity game. And that's why I've marked her quite far down my list. But by encouraging children to read, feel inspired and be creative, she has had a greater impact on the world than most of the other names on it."

Rowling recognized the sweet comments about her, and jokingly asked that the writer step-up so she could personally thank him/her.

Just been sent this! Could the writer let me know who he is? I'd love to thank him! #Valentines pic.twitter.com/OQtbxPD6AL

This was clearly a sarcastic move by Rowling, who got into a heated feud with Morgan just a few days prior in regards to him going on Fox News and calling her a "serial loser"

This is why I've never read a single word of Harry Potter. https://t.co/XUJBMs4KKm

The fact-free, amoral, bigotry-apologism of celebrity toady Piers Morgan is, of course, why it's so delicious to see him told to fuck off. https://t.co/4XNF4G0nlD

I see: if you win, you're right? I seem to have read something rather like that before... hmm... pretty sure it was in German... https://t.co/omRwd6l2RW

.@piersmorgan If only you'd read Harry Potter, you'd know the downside of sucking up to the biggest bully in school is getting burned alive.

I mean, Morgan's picture was displayed on the front page of the article. Leave it to a true twitter-queen to make such a subtle jab. Many users suggested that Morgan didn't even realize what she was doing.

Kardashian is no stranger to very sexy and very nude selfies. When she shared one of her showcasing her assets appropriately censored over her lady parts, Piers offered to help her cover up.

When you're like I have nothing to wear LOL pic.twitter.com/UlSLZb1fp1

I know the old man's $50 million in debt, Kim - but this is absurd.
Want me to buy you some clothes? https://t.co/hEA9osB2QF

This spiraled into a similar jab at Emily Ratajkowski, who posed in similar photo which forced the same reaction from Morgan.

Do you want me to buy you some clothes? You look freezing. https://t.co/FHXB1U50f6

@piersmorgan thanks, but I don't need clothes as much as you need press.

And again, Morgan took a jab at Mrs. West. Morgan in an open letter to Kim on his DailyMail column after her Paris robbery wherein he questioned her motives as a celebrity, her parenting and her illustrious lifestyle.

Leave it to Chrissy to stand-up for her girl Jennifer Aniston and get slammed by Piers Morgan.

In a column Morgan wrote for DailyMail regarding Aniston's blog post on Huffington Post about how she deals with media gossip and scrutiny, Piers claimed the actress

"There's another reason why the media objectify and scrutinize famous women, and why little girls get confused about beauty and body image."

"It's this: female stars like Jennifer Aniston deliberately perpetuate the myth of 'perfection' by posing for endless magazine covers which have been airbrushed so much that in some cases the celebrity is virtually unrecognizable."

Tiegen was not here for those comments.

@piersmorgan saw your piece on Jennifer Aniston. Why do you ALWAYS take the road of being the piece of shit asshole?

@piersmorgan particularly with women and people of color. tell me it's just for clicks?? Please tell me you aren't TRULY this vile.

@piersmorgan I think you aren't this bad & have simply sold your soul for clicks. Which is even sadder than actually believing your garbage

Morning, Ms Teigen. You didn't actually read it did you...? Try doing that before throwing another diva tantrum. https://t.co/rxCHbLT2lH

@piersmorgan unfortunately, I read it. I'm not so much a diva as I am a person who slows down at car crashes, apparently.

No, my little bundle of hypocrisy, YOU'RE using ME for clickbait.
Now hush before your sanctimonious spleen bursts. https://t.co/Cm4A3uKxXW

@piersmorgan you're right. It's ME who writes weekly columns demeaning and criticizing women and black people. All me. Goodbye, King troll.

Says the world's biggest, lamest 'celebrity' troll.
Your husband's a genius so I forgive your childish impudence. https://t.co/GFgmWpPyFt

@piersmorgan my husband thinks you are one of the most misogynistic, condescending morons on the planet but thank you.

It all started with McGregor was schedules to appear on "Good Morning Britain" but chose to skip the interview after finding out that Piers Morgan was the host.

Was going on Good Morning Britain, didn't realise @piersmorgan was host. Won't go on with him after his comments about #WomensMarch

Sorry to hear that @mcgregor_ewan - you should be big enough to allow people different political opinions. You're just an actor after all.

It doesn't stop there. Piers Morgan trolls and continues to Troll some of Hollywood's biggest names for reasons that seem far from being just personal.

“Me-Me-Me-Meryl's a great actress but she's rapidly turning into the world's most crashing Hollywood pseudo-political bore,” Morgan said in yet another DailyMail column.

The actor went in on Streep for her recent comments on politics at the Golden Globes.

After the 2017 Grammy's, Morgan shared his candid opinion on Beyonce's performance.

Didn't really 'feel' that Beyonce performance. Seemed heavier on the narcissism than the music.
#GRAMMYs pic.twitter.com/KcUeV4WnSL

Queen Bey didn't reply to that one, but as you can be sure of, the Beyhive did.

7. Piers Morgan vs. The Beckhams

Back in December of 2016, Morgan slammed David and Victoria Beckham for having their son, Cruz, release a pop single.

"He's an 11yr-old child being cynically pimped out by his famous parents with your collusion."

They deliberately exploit their family for commercial gain. We are thus all entitled to comment. https://t.co/dW63Gr4Nuw

If we've learned anything about Piers Morgan after a look through his encyclopedia of trolling, we're sure there will be more to come in the future. Or...tomorrow.