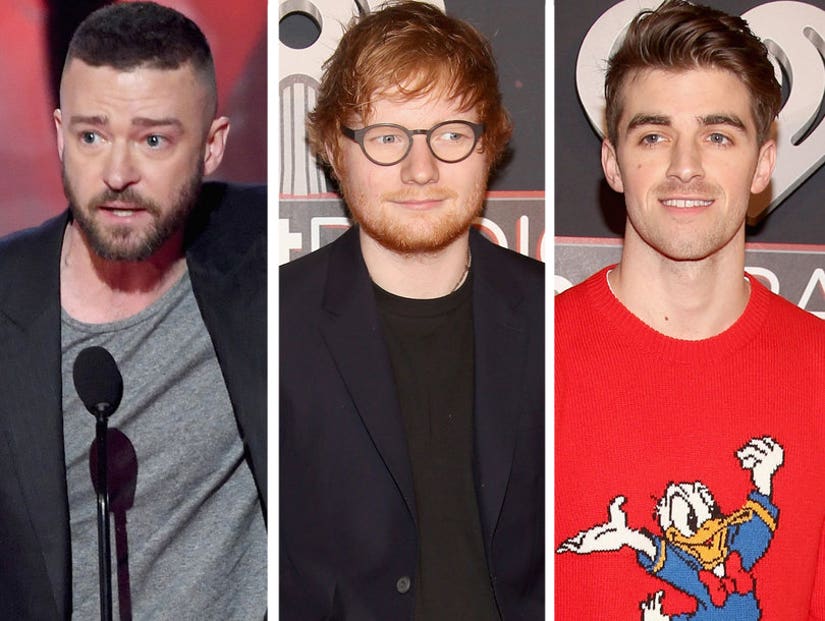 If you missed the 2017 iHeartRadioAwards on Sunday night, TooFab has all the buzziest moments you need to catch up on - plus the complete winner's list.

With iHeartRadio DJ Ryan Seacrest hosting, the show celebrated the year's biggest names in music. Unsurprisingly, Drake, The Chainsmokers and Twenty One Pilots were among the nominees who dominated the awards. Meanwhile, Justin Timberlake, Miley Cyrus, Ed Sheeran, Coldplay and Bruno Mars provided the highlights.

Here are the eight buzziest moments of the night.

The singer won iHeartRadio's Song of The Year award and used his acceptance speech (above) as an opportunity to share the true meaning behind the hit song "Cant Stop The Feeling."

“If you are black or you are brown or you are gay or you are lesbian or you are trans or maybe you're just a sissy singing boy from Tennessee. Anyone that is treating you unkindly it's only because they are afraid or they have been taught to be afraid of how important you are.”

Miley and Noah Cyrus were giving us #SisterGoals

The pop star dressed up in full Noah Cyrus cheerleader gear to introduce her younger sister and best friend.

“She knows who she is as an artist and I can't wait for the whole world to get a load of her vision,” Miley said holding an “I Love Noah Cyrus” sign. “She's who I want to be when I grow up, and that's saying a lot, 'cause she's younger than me. Get ready, because 2017 is about to be Noah's year.”

Noah later told Seacrest that Miley's sweet intro made her tear up right before she was about to sing.

The major key producer brought his four-month-old son to help him introduce the wildest partier he has ever gone out with, who also just so happens to make chart-topping singles.

Ed Sheeran hit the stage with a very sweet and simple performance. The “Shape of You” singer didn't need to be theatrical since his raw voice and crazy instrumental skills brought the majority of the audience to their feet.

Sheeran also told E! on the iHeart red carpet that a duet with his BFF Taylor Swift is in the works.

We want something just like this performance by @TheChainsmokers and Chris Martin from @Coldplay. Like, at all times! #iHeartAwards pic.twitter.com/WPzRN4QfU9

The Coldplay front man hit the stage with The Chainsmokers for an extremely energetic performance of their new single “Something Just Like This."

Martin turned his cameo into a rave as he jumped up and down with his fans in the mosh pit. It looked like the singer may have even had a little too much fun since it sounded like he ran out of breath a few times during the performance.

Coldplay accepted the award for Best Tour by recruiting three of Katy Perry's young dancers to read their hilarious speech that poked fun at the band's age and their adorableness in comparison to One Direction.

The “Bounce Back” singer took a page out of Timberlake's Oscars playbook when he decided to repeatedly photo bomb Seacrest as he was hosting the awards.

Bruno Mars Knows How To Close Out A Show

Mars spread some “24K Magic” in the iHeart air to wrap up the show with his entertaining performance and acceptance of the 2017 Innovator Award.

“Innovator is a very heavy word,” Mars said after performing. “This award, I'm so honored. It's a little ironic for me because I genuinely feel like I'm just getting started. I don't know where we're going yet, but we are going.”

Song of the Year: “Can't Stop the Feeling” – Justin Timberlake

Female Artist of the Year: Adele

Best Duo/Group of the Year: twenty one pilots

Alternative Rock Song of the Year: “Heathens” – twenty one pilots

Alternative Rock Artist of the Year: twenty one pilots

Rock Artist of the Year: Disturbed

Country Song of the Year: “Somewhere On a Beach” – Dierks Bentley

Dance Song of the Year: “Closer” – The Chainsmokers featuring Halsey

Dance Artist of the Year: The Chainsmokers

Hip-Hop Song of the Year: “One Dance” – Drake featuring Wizkid and Kyla

Hip-Hop Artist of the Year: Drake

R&B Artist of the Year: The Weeknd

Producer of the Year: Benny Blanco