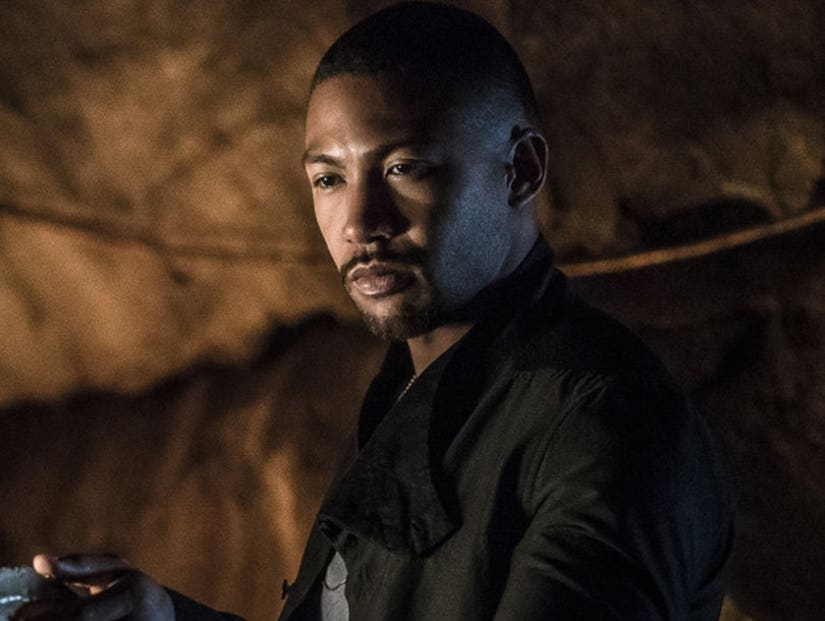 Charles Michael Davis is calling the shots on Season 4 of "The Originals," both in front of and behind the camera.

While Davis teases an ever-evolving dynamic between his character and Joseph Morgans's Klaus as the season progresses, the actor found himself in a new position of power in real life with his directorial debut for "Originals" Episode 7 of the season.

TooFab learned that Davis has accomplished one his career bucket list goals accomplished during our interview about the show's new season, potential "Vampire Diaries" guest stars and what he learned crashing at Matt Davis' place in Los Angeles.

With all this talk of time jumps, where do you see yourself in 5 years? Is there something you would like to accomplish in that time, personally or professionally?

That was something I had to ask myself a few years ago. I was reading Peter Drucker's book, a little essay about how to manage oneself. He says to manage oneself, you have to ask yourself where you want to be in 10 years and start to do those things now so that you're prepared in 10 years. One of the things I asked myself was, well, where do I want to be in 10 years? The people I admire -- Denzel Washington, Brad Pitt, Mark Wahlberg -- they're producers and directors so I actually started shadowing in season 2 for directing and they actually let me direct an episode for season 4. So I directed episode 7.

At the time, when I asked myself 10 years from now what do I want to do, it seemed like it was a really big feat to be not only worrying about an acting career but all these other things. It's amazing how quickly I got to check something off my list about directing. I also took up writing. I have writing partners. 5 years from now, I want to be doing films and be more established and be able to produce and direct projects that I like. I've been preparing for that now. I'm in New York right now just studying with this acting teacher that taught De Niro. He's like 94 years old, he's full of wisdom. 5 years from now, I just want to be a better actor as well, so I'm doing things now to prepare for it.

How was it directing the cast?

It was great. I got to see the different personalities from behind the camera, where before we're working as peers and I notice what they do, how they act, how they do that line, how they do this. But now that I was directing, I was responsible for well, I want it to be done this way, I'd like it angled this way or I don't know what I want but I know you'll surprise me.

I'm really proud of the cast because they're very very professional and I could trust them. Actors like Riley Voelkel and Steven Krueger, I had a lot of scenes of them together and they were great. I could come in and say anything and they'd try it. It was really great directing [Joseph Morgan], he's so professional, he comes so prepared. It's great directing Daniel [Gillies] because he's so unpredictable. I got to use that as a strength, where it was like, ok, I'll let him give great ideas and then I'll just steal them and say that I thought of them and take credit for them later, because I directed the episode.

What's something you're excited for the fans to see after the time jump?

We take a slightly different approach. Now we have Hope, who's now 7 years old I believe. So it's really exciting for the fans to see her work. Summer [Fontana] was great to work with and she brings something different to the dynamic of the cast. Really, everything. It's going to be a really good season. I think where we left off in Season 3, there's a lot to discover in Season 4. I'm really glad we're finally going to be on the air.

How would you describe Marcel's relationship with Klaus when the season kicks off? Klaus has been locked up now for 5 years.

That's a rocky, a rough situation and one of the ones I know the fans are really curious about. A lot of people expect him to go after Marcel, kill Marcel. But their relationship is pretty similar to how it's been. It's a seesaw, it just goes back and forth with one getting the upper hand over the other and then usually something new comes in and changes that tension into a new dynamic. Thats where we're at when we come back in Season 4, where the balance is shifted to Marcel's favor and it's a little more humbling position for Klaus and now he's gotta build his way back up.

And for you, as an actor, how it is to play someone who's on top again?

It was something he was always campaigning for, like politics, like driving towards wanting to be in that seat. Now he's in the seat and knows what to do with it. It wasn't given to him like Kiefer Sutherland's show ["Designated Survivor"], it didn't just out-survive everyone, he's been pushing for it.

How much of a surprise was it for you to see where everyone was after the time jump?

Not too much, because where we left off, half of the cast was sent out of New Orleans. It was a nice breather, relaxing of the tension. When they show up in Season 4 for me, I can take it as a surprise as a character. Other than that, the other people in Marcel's world at the time when we meet him are Vincent, who he's working with now, Josh, who he's always been friends and his right hand man, and we have a new character played by Taylor Cole, Sofya, who was introduced in Season 3 and that's a new relationship.

Matt Davis will be popping up this season. Have you filmed anything with him or can you tease Alaric's arrival?

I specifically said I don't want to work with Matt Davis because it's too confusing, once you say, 'Mr. Davis, please come on the set.' [Laughs] We have Matt Davis on set and I don't know if I can tease it. I did get to work with him in some capacity. I like Matt, I've traveled and done conventions with Matt. He actually let me stay in his place when I was in L.A. in January while he was still filming. I got to look at his library, go through his cabinet, see what kind of things he keeps in the fridge, learn all the intimate details about him. He's also a painter, a very good painter. He appreciates art. I like working with Matt, I hope I get to work with him more in the future.

We got a lot of fans wondering if there are other "Vampire Diaries" characters you'd like to see swing by now that that show's wrapped up?

That show's dead and over with, let's bring in new vampires! Let them be! They had eight seasons, give us our time to shine! No, I'm kidding. We owe a lot to them, especially to the fans, I would love for their characters to come over. I just love working with them.

We'll go and do conventions for both of our shows, TVD and "The Originals," so I get to hang out with them off set when we travel. It'd be nice to actually work with them and learn from them, see what their work ethic is life.