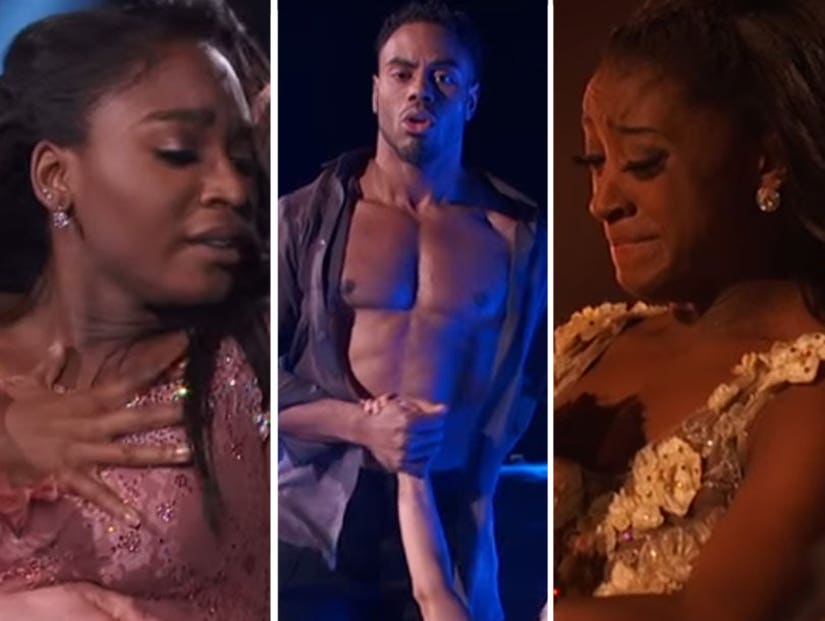 I'm back as TooFab's officially unofficial "Fifth Judge," ready to dive into Week Four of the competition, as the couples commemorate the most memorable year of their lives. We got our first glimpse of a contemporary piece from our celebrities this week, along with the rumba and the waltz. The good news for everyone is there was no quick step this time around.

Fair warning, since I'm safe at home, I'm probably going to be a little harsher than my colleagues Carrie Ann Inaba, Len Goodman, Julianne Hough and Bruno Tolioni. But I might be nicer, too.

Fifth Harmony member Normani Kordei & Valentin Chmerkovskiy channeled the year 2012, which is when Fifth Harmony was first formed on the "X Factor" stage. We already know Normani is a beautiful dancer, and Valentin took advantage of that with a powerful piece with live musical accompaniment. Normani opened it singing a few lines herself before her bandmates took over while she danced. It felt more like a contemporary dance with a rumba tease than an actual rumba, but it's hard to complain when it's executed as nearly flawless as this was. Normani is so confident, and such a wonderful performer, she is definitely one to watch.

'The Bachelor' Nick Viall & Peta Murgatroyd didn't have to go back very far, with Nick's moment being the year 2016 when he met Vanessa Grimaldi on 'The Bachelor" and finally found love. What a fun piece, with Nick starting the dance with an entourage of female dancers, and culminating with his actual wife. This was by far the most confident and relaxed he has been all season, with solid footwork and carriage. he was a little stiff at times, but this was an actual rumba, so props for that. Easily his strongest performance of the season so far.

"Shape of You," Ed Sheeran

Olympic figure skater Nancy Kerrigan & Artem Chigvintsev didn't reflect on her Olympic struggles or victories. Instead, it was the struggles to start a family, including six miscarriages in eight years. The same strength she put into her career she put into her family, and now into this dance. She's given strong performances to this point, but this foxtrot was the first time she moved me. It has a lot to do with the theme of the night, but there's an emotional element through these routines. The choreography was complex and quick, and she had little trouble with it. Nice carriage, wonderful arms. Her foxtrot was on point. Another one to watch, especially if she's emotionally connected to the piece.

Mr. T & Kym Herjavec looked back to 1995 when Mr. T began his battle with cancer, and used his faith to get through it. The song "Amazing Grace" is powerful for Mr. T personally, leaving him emotionally raw throughout rehearsal. Technically, this waltz was his most on point performance thus far, but performing the steps correctly isn't quite enough. There was no grace, amazing or otherwise, in his movements. He simply knew the correct steps in the right order. Kym was so graceful and flowing, it actually made his stiffness stand out even more. Sentimentality is nice, but I'm sorry, it can not make what we just saw better.

'Glee' star Heather Morris & Alan Bersten (standing in for Maksim Chmerkovskiy) got married in 2015 to a former high school classmate. Her inspiration for this dance came from her husband and her son. Even the song choice, her son's favorite, was a big part of the wedding. While she's an amazing dancer, Heather always struggles every so slightly to get those movements quick and sharp on some of these styles, It happened again here, but there was still very little to complain about. She is strong and confident, and her arms were amazing when they hit. This was a fast and difficult cha-cha-cha with a lot of classic elements in it, and Heather confidently sailed through them. Another contender. It's shaping up to be an exciting final few episodes.

"Shut Up and Dance," Walk the Moon

Former Cubs catcher David Ross & Lindsay Arnold were clearly going to make their dance about the Cubs' 2016 World Series victory and his retirement. And now his passion is his kids, with both elements of himself on his mind during a quick buy lovely Viennese Waltz. He struggled a bit with his stance, and had too much bounce early on. There's a grace and fluidity necessary that was missing for a lot of the performance, but his heart was in it and the passionate connection between him and Lindsay was real. I have no idea where those other high scores came from, because it was technically just not strong enough.

NFL running back Rashad Jennings & Emma Slater explored his challenges trying to connect with his father. The season's first contemporary performance allowed him to pour his heart into a lovely piece by Emma. He was a little stiffer than her in some of the movements, but he absolutely sold the anguish. There were plenty of impressive lifts throughout, and the piece culminated with him embracing his father and mother in the audience. What a vulnerable and powerful moment you wouldn't expect from an athlete. Breathtaking and beautiful. The only critique was a few moments of stiffness here and there, mostly in his arms and chest, but it was well worth earning the highest points of the season so far."Unconditionally," Katy Perry

'Real Housewives of Beverly Hills' star Erika Jayne & Gleb Savchenko recalled 1989 when she moved from Atlanta to New York City to chase her dreams. I'm not gonna lie, when this started it was like some bad amateur Madonna tribute. Thank god the cha-cha started, or the score would have been terrible. As it stood, Erika was not great here, stiff and clearly unsure of herself. I'm not sure she knew the choreography, and even forgot to smile from time to time as she was trying to remember the moves. Her arms were too small, her movements to clunky, disappointing overall.

Olympic gymnast Simone Biles & Sasha Farber talked again about her adoption in 2000 from foster care, and she credits her parents for all that has happened in her life. Where words fail he, her hope was that she could express her thanks through dance. This was a great Viennese Waltz, though I found myself thinking her movements were too strong at some points, and her carriage not quite dance position. But these are minor complaints as technically very strong in almost pure waltz choreography. Plus, she poured her emotional heart into each step, strengthening them. She followed the lead of several of her predecessors and closed by embracing her family.

Bull-rider Bonner Bolton & Sharna Burgess have had to work with the repercussions of his 2016 accident that left him temporarily paralyzed and ended his dream and career. The piece was about saying goodbye to that path and embracing the uncertainty of a new future. This was a night and day improvement over last week. He was actually light on his feet where he needed to be, and only a little stiff throughout, missing a few steps along the way. It was a nice nod to who he is to add the cowboy hat at the end. Clearly, the emotion of the week poured into the performance, giving Bonner his best yet.

The couples in danger were Mr. T & Kym, along with Erika & Gleb. Bonner & Sharna had a worse performance than Erika, but I don't think she's connecting with viewers in a positive way. That said, Mr. T has long been the heart of this season, and still he was eliminated in this fourth week. While he wasn't the strongest dancer, he was always a delight to watch. Next week, I fear Erika may follow him unless she really turns in a powerhouse performance.