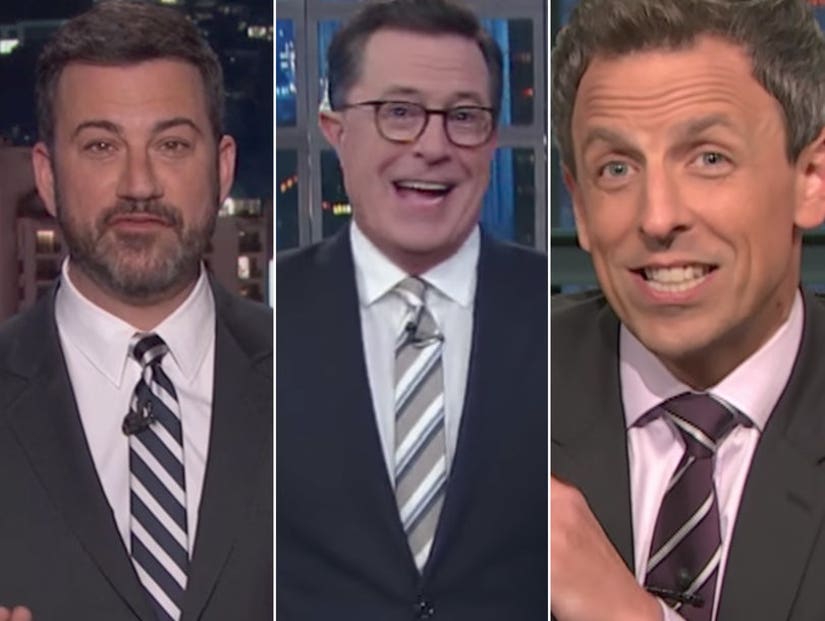 James Comey was the talk of late night on Wednesday, as nearly every host had something to say about his written testimony before today's big hearing.

From the surprise one on one dinner President Donald Trump allegedly cornered the former FBI director into to all his supposed talk about loyalty and the "cloud" caused by those Russian hooker rumors, Jimmy Kimmel, Stephen Colbert, Seth Meyers, Samantha Bee and Conan O'Brien all couldn't resist a dig or two in the Donald's direction.

During his monologue, Kimmel asked, "Can you imagine getting fired and then the next thing you know, you get to trash talk your boss to the whole world?"

Of the infamous dinner, he said Comey's statements were "starting to read like chapter one of Fifty Shades of Orange, right?"

"I love that he denied being involved with hookers in Russia," he went on. "Let me tell you, Bill Clinton must be laughing his ass off right now, wherever he is!"

As for Comey wanting no more direct communication with Trump, Kimmel joked, "Melania said the same thing, by the way. Didn't work out for either of them."

Meyers called the statement "damning and truly bizarre" during his show.

In reaction to Comey saying he met with Trump nine times in four months, Seth joked, "To put that in perspective, he's only talked to Eric 5 times ever. And three of those were just, 'What's your name again?'

He also joked about the dinner, saying, "So Trump invited Comey to a dinner without telling him who would be there and then it turned out to be just the two of them. This is starting to sound less like 'All the President's Men' and more like a Lifetime original movie. James Comey and Donald Trump star in 'Suspicious Attraction.'

Colbert called Wednesday "the most magical night of the year because it's Comey Testimony Eve. Can you feel the anticipation? I can feel it Comey in the air tonight!"

Of the dinner, the host joked, "Oh come on, that's the oldest trick in the book: You invite your FBI director over for a movie, saying it's going to be a group thing, when he shows up, just the two of you. Can't make Netflix work, so … so you obstruct justice."

He also went in on Trump allegedly saying he needed "loyalty" from Comey and the awkward silence that followed that demand. "He didn't move a muscle. Basically Comey treated Trump like the T-Rex in 'Jurassic Park.' It makes sense, they both have the same sized hands."

As for the "cloud" comments Trump supposedly made, Colbert said this: "That's not a cloud. Meteorologists call that a shit storm."

Colbert, Conan and Samantha Bee also all created fake trailers for Thursday's testimony -- watch those all below: