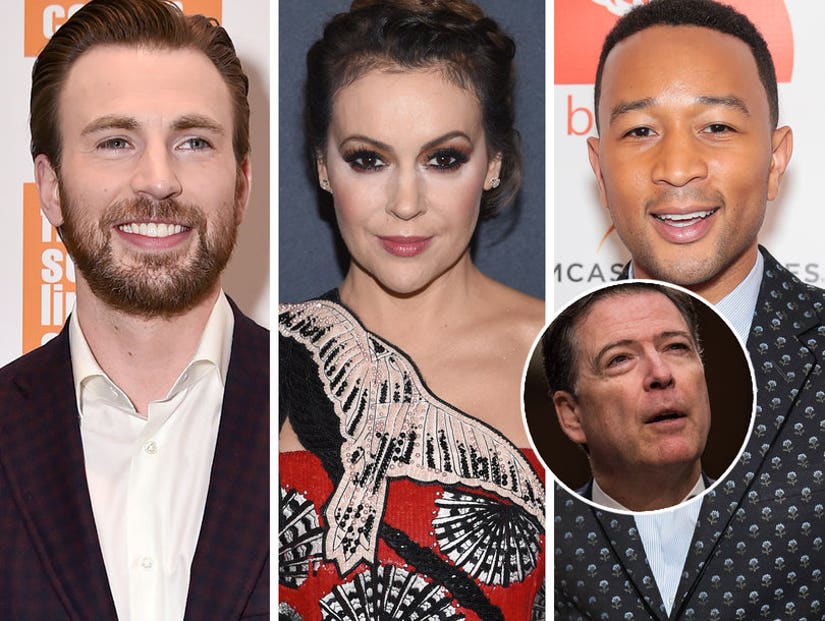 Celebrities reacted on Twitter Thursday as former FBI Direction James Comey testified at a Senate hearing on Russian interference in the U.S. election.

Comey appeared in front of Senate to detail his interactions with President Donald Trump to clarify whether or not his firing was in an attempt to stop an investigation into the White House.

Comey was fired in early May in an official White House statement that read, "Today, President Donald J. Trump informed FBI Director James Comey that he has been terminated and removed from office," Press Secretary Sean Spicer announced Tuesday. "President Trump acted based on the clear recommendations of both Deputy Attorney General Rod Rosenstein and Attorney General Jeff Sessions."

Celebrities were active on Twitter during Comey's testimony - see all of the reactions.

Do you realize that this man was fired from a job he loved, defamed on the way out the door & denied a proper goodbye? #ComeyDontPlayThat 🙄

If Comey screams "You can't handle the truth!" we all win.

I've never wanted Trump to tweet so badly in my entire life. Pick your phone up! Do it!! DO IT!!!!

This. Is. Crazy!! Watching history unfold.

@realDonaldTrump sought compassion for fired & disgraced #MichaelFlynn He was not trying to get #JamesComey off his own back.

Let me just host the freaking reunion show so we can GET ON WITH IT!!! #ComeyHearings

If you guys think this is exciting, wait until the Cloud itself testifies. pic.twitter.com/xqtjEfCn7c

Be a leader @marcorubio! This could have been your moment to shine. Instead, you are a puppet for a corrupt President.

"Lordy I hope there are tapes!" -- Comey, and literally all of us, too.

I don't normally like courtroom dramas, but I'm transfixed by this one. Tune in live now! https://t.co/R4uQBMbCfd #JamesComey

I think what Sen McCain is saying is that FBI should investigate if Hillary Clinton colluded with the Russians to hurt her own campaign. OK.

Everyone listening to Mcain: pic.twitter.com/QR4RnU2u1C

Comey is right where we need him.
Pissed.

Emotional opening by Comey. Clearly aftermath of his firing an affront to him/FBI

Testifying #JamesComey reminds me of when #DonDraper pitched the @Kodak Carousel. Aside from his use of "Lordy", he's eloquence in a suit.

Good to see someone with sense of ethics and respect for truth - in contrast to the congenital serial liar trump impeach ! https://t.co/7XaIFq6gsN

Comey opens saying he was confused by the reason he was fired by President Trump. Comey says Trump told him he was doing a great job.

While the nation is at risk from international terrorism, Comey's sole objective is to trip up his superiors actually trying to fight terror

I am not happy that #ComeyDontPlayThat may now be a thing. I realize I may have done that. I will take that time out.

Someone said there are more people lined up to watch Comey's testimony than there were at the inauguration.

I need 'Lordy, I hope there are tapes' on a t-shirt

Based on today's hearing and the way both parties are handling it we are now living in two different realities.

Buy a drink for every reporter who hasn't described the Comey hearing as a "blockbuster".

So basically Pig kept bringing up Comey's "job stability" in conversation like a third-rate mafia thug threatening a store owner.

Damn! Comey just made me emotional with opening remarks. Didn't expect that.

Comey is subtly shady and it's great. He just said that the AG knew he shouldn't have left the room. #ComeyTestimony

"Today's your opportunity to set the record straight"--translation: today you make up for what you did to screw @HillaryClinton #ComeyDay

Comey should quietly place without comment a jewel case labeled "Pee Tape" next to him on the table.

People are having drinking parties for #JamesComey's testimony. They'll be Comeytose by 11am....

Somewhere, Jared is letting Donald beat him at Mario Kart.

I love how Comey keeps calling @realdonaldtrump that "particular person."

Comey has two waters on his desk and the pattern with which he drinks them will deliver a binary message. Pay close attention. pic.twitter.com/bx3HF8O3II

So basically Pig kept bringing up Comey's "job stability" in conversation like a third-rate mafia thug threatening a store owner.

Worried his boss will lie, didn't feel safe being alone, whispers in ear. This is like a weird sexual harassment hearing . #comeyhearing

1/3 Flynn stuff is BS in context 2 guys talking about a guy they both know well. I hear "I hope nothing happens but you have to do your job"

2/3 very far from any kind of coercion or influence and certainly not obstruction!

3/3 Knowing my father for 39 years when he "orders or tells" you to do something there is no ambiguity, you will know exactly what he means

Hoping and telling are two very different things, you would think that a guy like Comey would know that. #givemeabreak

Comey: I thought trump might lie or grab me by the pussy and I'm all out of pussy.

"What the president whispered in my ear was 'I really look forward to working with you.'” - Comey pic.twitter.com/cPlqbR7S4O

#ComeyDay Drinking Game: drink every time you realize how depressing it is that you got excited to watch a Senate hearing.

Let's hear it for the real heroes of the day: the aides currently restraining the President from tweeting. #ComeyDay