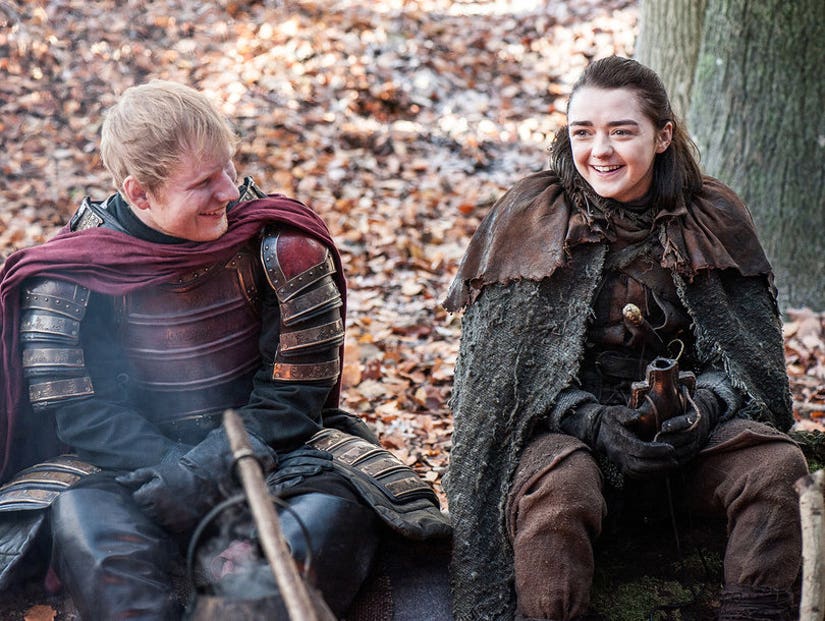 Fans tune into "Game of Thrones" expecting to see beheadings, dragons and White Walkers. Last night, however, they got Ed Sheeran.

The performer made a cameo on the Season 7 premiere, playing one of the singing soldiers who Arya came across in the woods after offing the entire Frey family. After hearing him sing, she tells him, "That's a pretty song" and she joins them for some food and drink.

According to creator David Benioff, they wanted to get Sheeran on the show to surprise Maisie Williams, who is a superfan of his music in real life. Mission accomplished.

It was a jarring cameo however and many fans were vocal about Ed's appearance on Twitter as the episode aired. Check out some of the funniest or most brutal memes and reactions below:

I'm forced to listen to ed sheeran songs 67 times a day bc it's the only shit on the radio & now my #Gameofthrones isn't even a safe place.

Only way to justify Ed Sheeran's #GameOfThrones cameo is for him to greet Bran with: "When your legs don't work like they used to before..."

If Arya kills Ed Sheeran it'll be worth it

When the club isn't the best place to find a lover but it turns out the bar isn't either and so now you're just open to any new ideas pic.twitter.com/qMOtJsZsB6

Ed Sheeran on set for his Game of Thrones episode pic.twitter.com/sJxGbyQMhp

Ed Sheeran's cameo on #GameOfThrones has everyone playing wordplay on his songs. 😂😂😂😂 pic.twitter.com/368BkUsPwF

Arya: That's a pretty song. I've never heard it before.
Ed Sheeran: It's from my new album Divide. Buy it on iTunes. #GoTS7 #WinterIsHere

Ed Sheeran has now polluted two classic fantasy franchises. Probably gonna play Ged in Earthsea whenever they get around to it

Friends, please tell me more about how seeing Ed Sheeran in your dragon show is unrealistic.

With @edsheeran in Westeros, I expect to see @Migos beyond the wall at some point this season #ThronesYall #DemThrones pic.twitter.com/7VgQ4ADlNJ

When Ed Sheeran's presence in #GoTS7 throws you off but the song he was singing is a bop. pic.twitter.com/KuGXzcueyP

Tonight's Twin Peaks may have been the weakest of this run but at least Ed Sheeran didn't show up.

I don't even watch Game Of Thrones but still mad Ed Sheeran ruined it.

Wow that is a series ruining cameo

For a full breakdown of the premiere, click the link below. 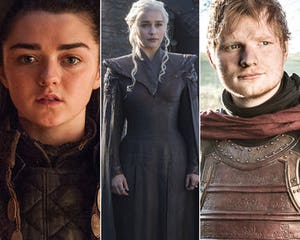