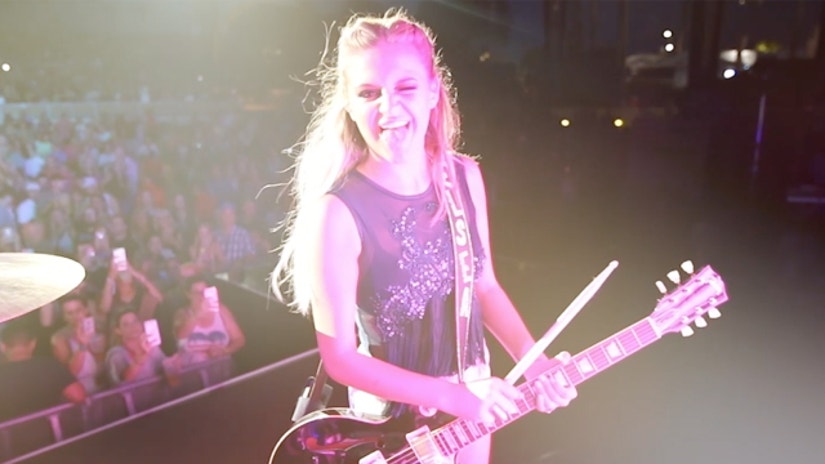 Midway through the You Look Good World Tour with Lady Antebellum, it's clear Kelsea Ballerini is living her best life.

In an exclusive look at what really goes on behind the scenes on the road (above), the "Peter Pan" singer is seen kicking back inside her trailer, celebrating with her crew before hitting the stage and, at one point, even getting locked out of her own meet and greet with fans!

TooFab quickly caught up with Ballerini before her stop in Maryland Heights, Missouri on Friday as she spilled on life on the go and why fans will be surprised by her new album, "Unapologetically," which drops in November.

Do you have a favorite fan interaction from this tour so far?

My favorite every part is every now and then there will be a little kid in the pit that's singing every word to my songs and I'll bring them on stage with me to sing my song, "Yeah Boy," it's always a really special moment.

Any behind the scenes moments stand out as well?

It's such a family tour and it's awesome having their kids out for the summer. Hillary's little girl Eisele runs around in princess dresses and I want to be here when I grow up.

What do you do with your free time on tour?

I like to get "off-campus" and explore whatever city I'm in, whether that's going to a fitness class or taking a walk around the city.

Are you always writing on the road too?

I'm not writing on this tour because I just finished my new album and needed to put all my focus on recording that, but starting next year I'll start writing on the road again.

What are you hoping fans take away from "Unapologetically" when it's released?

I really hope people feel like they get to know me better as a songwriter and a person. I hope that they find something in the record that connects with them.

Is there a song on there that will really surprise fans and why?

Absolutely. My first record was really light-hearted and youthful. This one definitely has more darkness, and more authenticity and growth in it that I'm excited to showcase in these tracks.