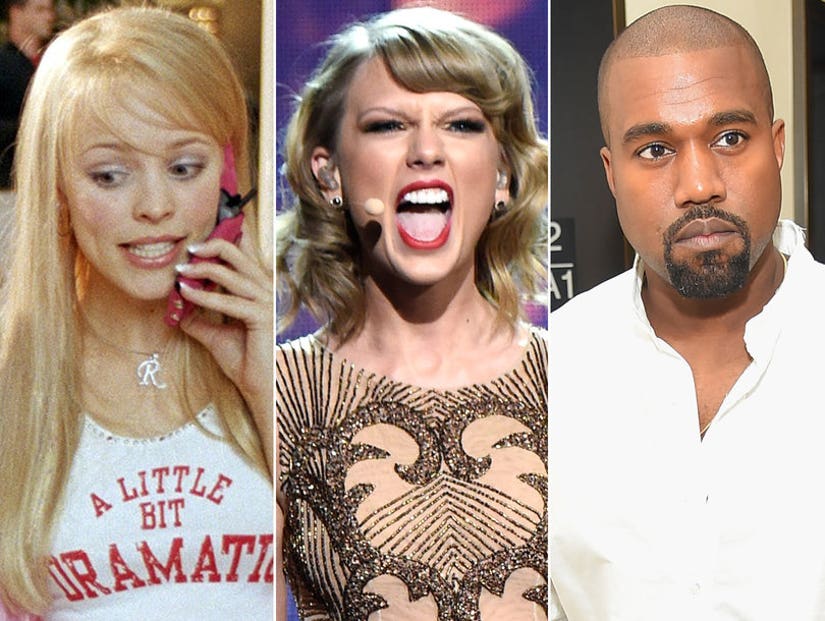 Sometimes a song is just a song ... this is not one of those cases.

The Internet theories about Taylor Swift's "Look What You Made Me Do" reached catastrophic highs on Friday, as the words to the single and visual cues from the lyric and music videos have set off rampant online chatter.

Swift's track appears to be a response to her very public feuds with Katy Perry, Kim Kardashian and Kanye West, using random references and thinly-veiled lyrics to go in on her public enemies.

With the help of some Internet super sleuths, we've analyzed everything having to do with the revenge song so far. Check out the breakdown of its hidden messages below!

Taylor's Beef with Kim and Kanye

The snake theme of both the lyric and forthcoming music video seem to be in direct response to being called a "snake" by Kim Kardashian, who tweeted the thinly-veiled message below about the singer after sharing receipts of Taylor and Kanye West's a telephone conversation about the lyrics to his song "Famous."

Some also believe Swift's "The old Taylor can't come to the phone right now. Why? 'Cause she's dead" moment in "LWYMMD" could be alluding to their phone call.

Though Swift had the snake emoji banned from her Instagram comments, it appears she's now embraced the title, even selling slithery merchandise on her website.

Doubling Down on the "Mean Girls" References for Katy Perry

Does Swift have a soft spot for the Lindsay Lohan movie?

The lyrics "I've got a list of names and yours is in red underlined" sure seem like a nod to the Burn Book in the 2004 film, where Regina George (Rachel McAdams) underlined her biggest target's names in red.

LOOK OUT REGINA TAYLOR'S COMING FOR YOU pic.twitter.com/gYjLYmYEJF

As one Twitter user pointed out, the beat to the song also sounds a lot like Peaches' "Operate," which was used in the movie's Halloween scene.

Taylor was once called "Regina George in sheep's clothing" and her new song uses the beat from this scene in Mean Girls. 👀 pic.twitter.com/lpRCCIIk1w

So, why so much "Mean Girls" talk? Well, Katy Perry once subtweeted "Watch out for the Regina George in sheep's clothing" after Swift referenced their "Bad Blood" beef in Rolling Stone.

Other slights towards Perry: It was dropped the same day Katy released the music video for her diss track "Swish Swish" and the video will debut at the VMAs, which Perry is hosting. Also, the video includes a visual of the phrase "Et tu, Brute?", once again referencing betrayal.

Many on Twitter were quick to point out how the chorus sounds eerily similar to Right Said Fred's 1991 classic "I'm Too Sexy," and with good reason: she sampled it.

Richard Fairbrass, Fred Fairbrass and Rob Manzoli -- the three members of the group -- are credited as songwriters alongside Swift and Jack Antonoff.

How this fits into the revenge theme, we're not entirely sure, but the guys seem pretty happy with how she used their song.

They also shared a photo of the thank you note and flowers Swift and Antonoff sent:

Thank you so much to @taylorswift13 & @jackantonoff - very kind!
(📸: Karl Adamson) pic.twitter.com/BWqrcCnYas