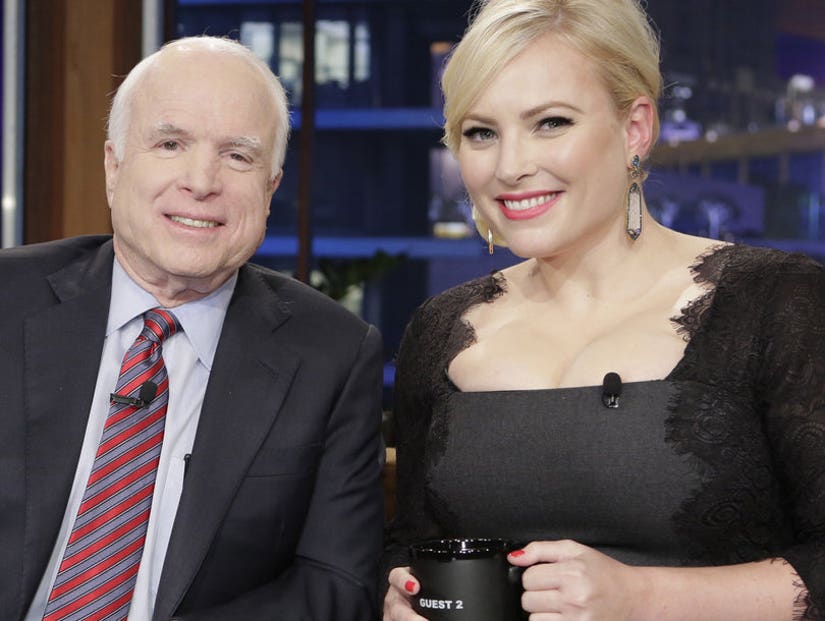 Meghan McCain shared a heartfelt tribute to her father, John McCain, after his passing on Saturday evening.

The Arizona senator died at the age of 81, days after announcing he was discontinuing treatment for brain cancer. "Senator John Sidney McCain III died at 4:28pm on August 25, 2018," read a release from his office. "With the Senator when he passed were his wife Cindy and their family. At his death, he had served the United States of America faithfully for sixty years."

Daughter Meghan took to Twitter to release her lengthy statement, which was followed by tributes from many in Hollywood who respected the politician.

I was with my father at his end, as he was with me at my beginning. In the thirty-three years we shared together, he raised me, taught me, corrected me, comforted me, encouraged me, and supported me in all things. He loved me, and I loved him. He taught me how to live. His love and his care, ever present, always unfailing, took me from a girl to a woman — and he showed me what it is to be a man.

All that I am is thanks to him. Now that he is gone, the task of my lifetime is to live up to his example, his expectations, and his love.

My father's passing comes with sorrow and grief for me, for my mother, for my brothers, and for my sisters. He was a great fire who burned bright, and we lived in his light and warmth for so very long. We know that his flame lives on, in each of us. The days and years to come will not be the same without my dad — but they will be good days, filled with life and love, because of the example he lived for us.

Your prayers, for his soul and for our family, are sincerely appreciated.

My father is gone, and I miss him as only an adoring daughter can. But in this loss, and in this sorrow, I take comfort in this: John McCain, hero of the republic and to his little girl, wakes today to something more glorious than anything on this earth. Today the warrior enters his true and eternal life, greeted by those who have gone before him, rising to meet the Author of All Things:

“The dream is ended: this is the morning.”

Keep reading to see how celebrities -- including Meghan's co-hosts on "The View" -- also honored him on social media.

Senator John McCain passed today, all i can think about..he never stopped trying to do his best. What an honor it's been to know him. My condolences to the family he loved and adored and to his daughter & my friend @MeghanMcCain...from all my family, much love

An honor and a pleasure to know Senator McCain. My condolences to the McCain family and to my dear friend @MeghanMcCain. I am in prayer for you. pic.twitter.com/YGhkK09V89

We have lost someone who was a voice of reason and truth. A hero. He will be sorely missed. RIP, John McCain.

Heaven just gained a HERO, in every sense of the word. God Bless you, John McCain.

Our statement on the passing of Senator John McCain: pic.twitter.com/3GBjNYxoj5

My deepest sympathies and respect go out to the family of Senator John McCain. Our hearts and prayers are with you!

I was honored to have met John McCain. He always stood up for what he believed was right. Sending love to his family on this very sad day for our country. pic.twitter.com/SiIsXJMqvo

Tonight we lost an American hero. We send our deepest sympathies to Meghan, Cindy, and the entire McCain family. @TheView family honors the life and legacy of Sen. John McCain — the beloved father and husband who devoted his life to serving our country. pic.twitter.com/8TnxJRl3rp

I will miss Senator McCain dearly, and my thoughts are with Cindy and Senator McCain's whole family. What I said yesterday matters even more today. Each of us must strive for his dignity, his service, his commitment to country. He showed us the way. https://t.co/xwaumiDrJ0

America lost a real hero today. Condolences to @cindymccain, the McCain family and the Arizonans who were so fortunate to have the opportunity to vote for a man of principle. John McCain's sacrifice and the sacrifices made by all our POWs and MIAs must never be forgotten.

God Bless, #JohnMcCain . Respect for this American citizen who proudly served our country for so many years. #RIP https://t.co/gzJTdG5QKz

Rest in peace, @SenJohnMcCain. We are forever indebted to you for your service and sacrifice. https://t.co/BwQsQCtDGb

Couldn't disagree more with Senator McCain on policy but there's no denying he was a hero who served our country admirably. He deserved so much better in his final years...the bullying by Trump and his supporters was awful.

This. Forever this. Thank you John McCain https://t.co/aa9nyizVxw

John McCain's finest moment (for me) came in 2008, when a woman at a rally referred to Obama as an Arab. "No, ma'am," McCain replied. "He's a decent family man, a citizen that I just happen to have disagreements with." That's manning up.

John McCain believed that every citizen has a responsibility to make something of the freedoms given by our Constitution, and from his heroic service in the Navy to his 35 years in Congress, he lived by his creed every day. https://t.co/946T7PnG53

John McCain in his last days on earth. All Americans should put aside politics and honor this patriot.

John McCain was fearless in war and restless in peace, always fighting to make America a more perfect union. The senator lived his life as a true American Hero. pic.twitter.com/Jfvire7ZWr

We just lost an American hero. A legend. A brave and important voice. A real man. A true patriot. Our hearts are heavy. John McCain was what we all wish for in a leader. He delivered.. He served his country in every way he could .. to the end.

I concur. John McCain was a fine man who embodied decency and lived a life of honor. RIP to a true American hero and patriot. https://t.co/PG9xyR4aXG

All my love, respect and admiration for @MeghanMcCain and her family today. I hope the President can muster some amount of decency and respect to say something kind about a man who was very important to this country, all political differences aside. #JohnMcCain

Sending love to the McCain family. A hero has fallen.

We have lost a true American Hero today! Someone who fought for our country abroad and at home in war and in peace. A man who would vote his conscience whether his party agreed or not. A… https://t.co/3VZrZ2o8n0

Thank you Sen. John McCain for fighting the good fight! God bless you.

RIP @SenJohnMcCain. A real American war hero. His service and sacrifice in Vietnam will never be forgotten.